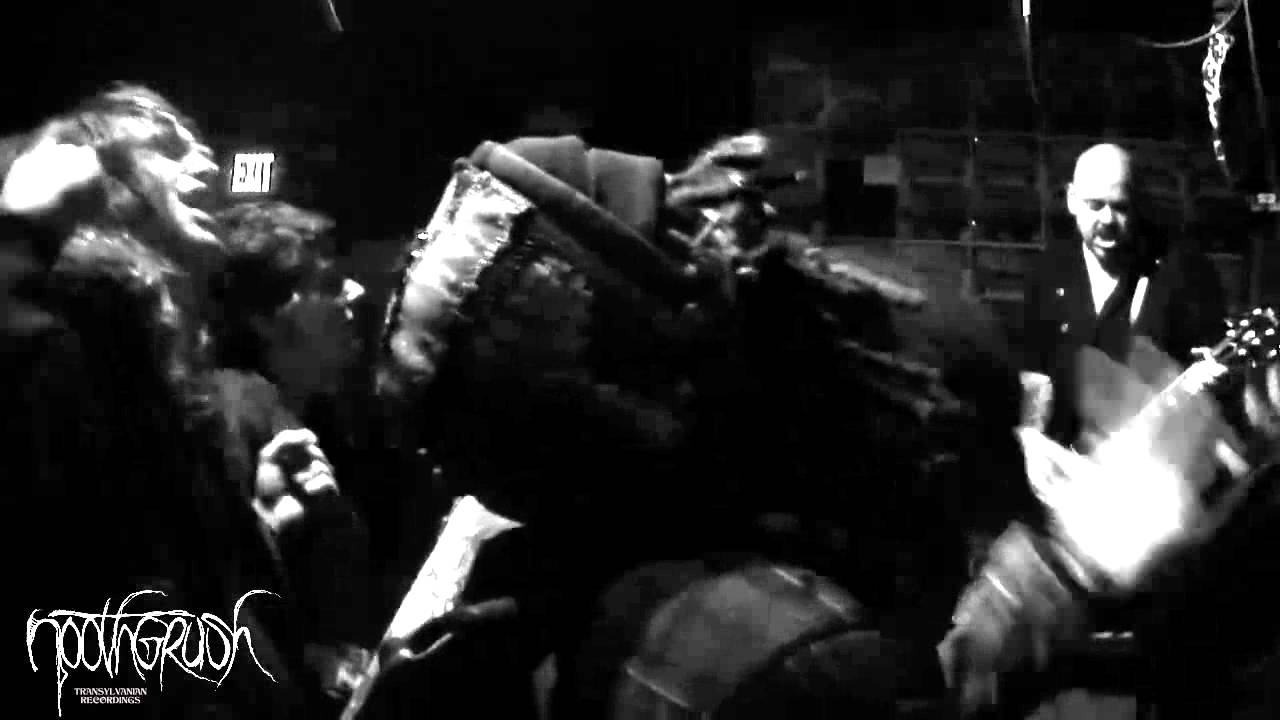 Noothgrush is the best Sludge Band in America. They have been crushing eardrums for over 2 decades. The story of the formation and the progression of Noothgrush is miserably wonderful after all. Tom Choi was one of the first members to be involved in the band, at the same time he had also been in Asbestos Death which was a group of musicians from The Bay Area that changed modern day Heavy music forever. Absestos Death transformed into SLEEP. Tom bowed out of Noothgrush early on, and focused on his other projects. Russ Kent, a.k.a. Mr. Hate, replaced Tom and Matt Harvey joined the band to play second guitar. Matt bowed out of Noothgrush early on, and focused on his other bands, Repulsion & Exhumed. At the turn of the Century, Noothgrush took a break from doing shows and began focusing on their own individual projects, including Chiyo Crushing Drums for Graves At Sea. A decade would go by before Noothgrush would play again. Southern Lord Records, the best Major Underground Metal Label in America, summoned Noothgrush to star alongside Winter at their inaugural Power of the Riff Festival tour stop in San Francisco in 2011. After their massively successful comeback show, Noothgrush kept moving forward, getting the opportunity to play Maryland Death Fest and many other festivals all over the World. Pretty much every single band that anyone in Noothgrush has been affiliated with has been the best of the best. In recent times, their lineup has expanded, with the addition of the tortured voice of Dino Sommesse. Dino is a living legend; he has been in the most respected Crust Punk/Sludge & Doom bands in America. In the 1990’s, Dino’s band Dystopia played with Noothgrush as much as possible. He also played drums for Asunder & Ghoul. This is his first opportunity to spew his hatred for the species without having to worry about wrecking symbols. A perfect (((addition))) to this legit SUPER Band.

Noothgrush was playing at The Gilman! The Gilman is a legendary Bay Area Venue that was put together by radical Punks to be an all inclusive safe place for kids of all ages. I am a card holder and supporter, and I always look forward to when I do make it out to this legendary club, because I know it is going to be a special occasion. This night’s lineup also featured Alaric, DeathgraVe & 2084.

Incantation has forged a path of perfect sounding Death Metal for 25 years. They put out a new album last year called Dirges of Elysium and on this tour they passed through Northern California and played a killer show in Sacramento(((California)))

Incantation has influenced bands all over the world, like Dead Congregation from Greece and Grave Miasma from The United Kingdom. Members have gone on to play/form other Heavyweight Death Metal bands like Mortician, Evoken, Funebrarum, Disma, Mausoleum, Cenotaph and many more. The NEW Death Metal community is vast and incredible, spanning New Jersey through Pennsylvania and New York. I am a fan of the sounds emanating from this area in America. It is filthy and wonderful; Incantation is one of the Best Death Metal Bands to have ever existed in America.

Mortuous is the best Death Metal band in the Bay Area. Mortuous began as a solo project of Colin Tarvin and then expanded to include some of the most respected musicians in Extreme Punk/Metal. Colin recorded a demo tape that made it to Col Jones and Mike Beams, whom were both in Exhumed and Repulsion. The vocalist for Bruxers, Al Tarvin, took on vocal duties and Nick Scarboro played Bass. This lineup recorded the tracks that appear on the Demo 2012. That recording was the first release on my label, Transylvanian Tapes. Shortly after the release of the cassette, the band was sidelined due to personal injuries and distance. Colin moved to Pennsylvania and joined a New Jersey Death Metal band called Deform. During the Winter of 2014, Colin moved back to California, eager to continue with a fully-charged Mortuous. Col Jones recently became a Father and decided to take some time away from full time bands to focus on being the best Father that he can be. Col Jones handpicked Chad Gailey to replace him on the throne. Chad Gailey is my favorite Drummer in the Bay Area. Chad is a founding member of Bruxers and also plays in Caffa & Necrot. He has natural chemistry with Colin, as they’ve been playing together at this point for almost a decade. This was footage from the first Mortuous show in 2 years live in Sacramento(((California)))

Alaric is a Death Rock band from Oakland. After a brief 2 year hiatus, they announced that they’d be returning to play alongside Noothgrush at The Gilman. Russ from Noothgrush plays leads guitar in Alaric through a wall of Laney Amps. Alaric drummer, Jason Willer, is a phenomenal drummer; he also plays in the Psychedelic Rock band Nik Turner’s Space Ritual. Vocalist, Shane Baker, has been in notable bands Dead And Gone & Pins of Light. 20 Buck Spin released the first Alaric record in 2011 and their followup split release with Atriarch in 2012. This is footage of their first show back live at The Gilman in Berkeley(((California)))

On 11/2/14 at the Oakland Metro Operahouse, Circle of Eyes opened for Graves At Sea.

Circle of Eyes is a Drone/Doom band from San Jose(((California))). Resurrected from The Abyss, recently performing for the first time in half a decade. Now with an expanded lineup that features the drumming talent of Jason Bursese. Jason is one of the most incredible drummers in the Bay Area, he also plays in Black Fucking Cancer & Cyanic. Lead Guitarist, Tony Bursese, has been a longtime contributor in Bay Area Black Metal. His former band, Necrite, was put out on the San Francisco based label, Flenser Records. Flenser Records also released a Circle of Eyes Cassette. Tony is the mastermind behind Black Fucking Cancer. I am very thankful to have the opportunity to get to collaborate with the Bursese Brothers. The BFC record is currently in post-production and as soon as that is completed, CoE will be begin recording. Thanks to Kevin Hobbs for filming our set.

Bog Oak is a Psychedelic Doom band from Sacramento/San Jose(((California))). Formed after a band called Druggernaut that Phillip Gallagher and Tony Bursese were collaborating on together split. Bog Oak featured a gritty vocalist named Julie, she alternates between agonizing harmonies and beautiful melodies with her vocal deliveries (they have a new vocalist now, Elise Tarens). Bog Oak has a record called A Treatise On Resurrection And The Afterlife out on Svart Records. This was one of their first shows with an expanded lineup. If you dig on Windhand, Dark Castle, & Electric Wizard, you’ll definitely appreciate this band’s existence.

Badr Vogu is a Sludge band from Oakland(((California)))

In 2014 they toured The United States and I released their latest offering, Agglomeration MMXIV, on my label, Transylvanian Tapes. They are going to be recording a new album this year at Earhammer Studios

Plague Widow is a Death Metal band from Sacramento(((California)))

Hal Rotter, the man behind, Rotting Graphics, is the main entity of this band. Conceptualized in 2011, they played their first show on 2/5/12 at The Sub/Mission in San Francisco alongside Your Enemy, Pillager, Apocryphon & Old Crow. I got to play that show and have watched this band progress and grow since the beginning. Chris Lemos, the bassist in Plague Widow, is one of the biggest movers and shakers in the Sacramento music community. When he is not playing in his bands, Church, Tom Hanx & Plague Widow, he is booking shows and working sound for live bands. Adam Jennings, Drummer(((DojoDestroyer))) for Plague Widow, also blasts in Tom Hanx and shreds guitar in a Kawaii Bubblegum Pop Punk Band called Shoujo Kitten, and two other pop bands called Boats and Little Tents. Plague Widow is going to have a new record coming out this year on Willowtip Records.

Horrid is a Death Metal band from Los Angeles(((California)))

I found out about this band by following Adrian Mejia, a very active Los Angeles-based Videographer. I subscribe to his youtube channel and Adrian has captured a couple of videos of this band that I’ve liked in his video vault. When I found out they were playing Oakland, I made sure to be there. Horrid play a perfect blend of Black/Death Metal. Their debut, Stoic Morbidity, recently was released on Headsplit Rekords. They are working on recording their newest release later this year.

Akatharsia is a Black Metal band from Oakland(((California)))

Tucker Zappas, Lead Guitarist of Akatharsia, is also the Lead Guitarist in the spectacular Santa Cruz-based Black Metal band Fell Voices. Gary Bundura, Rhythm Guitarist in Akatharsia, also spent time playing in Lycus. Max Lavine, Drummer of Akatharsia, crushes drums in the Oakland based Heavy Hardcore band Negative Standards. The first Akatharsia recording was released on Psychic Violence Records, a killer Underground Metal label from one of the members of Ash Borer. Their demo got the vinyl treatment thanks to Econo Jam Records. Econo Jam Records is a music shop located on Telegraph Ave in Oakland. Econo Jam Records has quickly became one of my favorite music shops in the Bay Area, they have a great variety of Punk/Metal/Hardcore/Indie/Funk/Rap Records, and it is orchestrated by individuals actually investing in their local community. Akatharsia independently released a split with Urzeit. You can pick up both pieces of wax at Econo Jam Records. This show was the record release party.

Led by Lead Guitarist Eric Stucke, who is also the Lead Guitarist in Caffa. Eric Schirado, Rhythm Guitarist, & Kyle May, Vocalist, both are former members of the Oakland based Black/Death Metal band Dead Man. Will Kovach, Drummer of Hallucinator, also plays Drums in the Grindcore bands Limbs & Bathtub Barracuda. This was the first Hallucinator performance, and it was also Eric Stucke’s Birthday Celebration. At this point, a few kegs of super fancy beer were demolished and this chaos ensued!