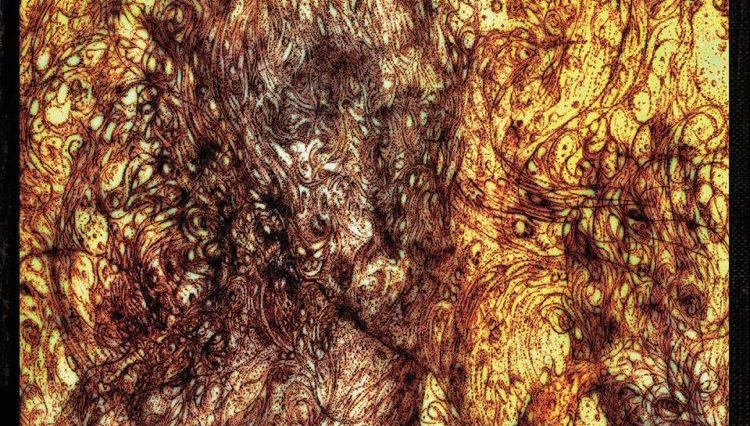 Here’s a band that’s been through it all, from internal strife to somehow surviving the death of founder/drummer Bill Bumgardner; they’ve broken up and gotten back together, enlisting the help of members from bands as various as Indian, Pelican, Yakuza, and Abigail Williams to complete this blackened opus of terror, vile horror, and unrelenting, crushing riffs. What they’ve created is an album that can sit pretty hatefully on the same shelf as their previous releases, one that honors what came before and blazes a path for what could come after.

This one is bleak and dark but you’d expect nothing less from Lord Mantis. These guys pummel and sludge in equal parts, the heart of the band always dwelling in utter darkness. Opener “Santa Muerta” is a grinding spit in the eye, hateful and full of venom. It gives way to mid-pace rocker “God’s Animal,” a song content to beat you over the head with its leaden hammer, lacing in classic rock solos and melody, always keeping that relentless, blackened doom at its core. “Qliphotic Alpha” comes next and it continues that mid-paced crush, adding layered keyboards and a more industrial feel. Nightmarish comes to mind in its unforgiving, punishing blackness. Bits of mechanized vocals extend the feeling of cold depravity. It eventually slows to a sludge crawl, with the shrieks of a damned soul echoing in its bones. A true epic. “Consciousness.exe” has a brighter guitar tone opening, as if rays of sunlight are dappling through the gloomy curtains. There’s a floating sensation here, different from the others, Lord Mantis again sticking to the mid-pace trudge and sludge, the guitars scraping the walls of a brightly-lit asylum. This flows into “Low Entropy Narcosis,” with its spoken-word vocals and acoustic guitars. It feels like an invocation, a song for a funeral, giving space and breathing room on an album that is crammed with riffs and despair. The crunch and rumbling blackness returns on “Damocles Falls,” the band returning to the grumbling doom they are so adept at. Descending into guttural vomiting at about the 2:30 mark, the song slows considerably, blackened riffing adding a nice layer of cosmic melodicism to the proceedings. It turns into a fist-raiser and a headbanger, a cauldron of bleak emotions. “Fleshworld” brings the speed back, blast-beating right out of the gate, finding a rock n’ roll groove at about the 3:15 mark, slowing even more at 3:50; all groove once it punches your face in. If you could point to one song that encompasses the entire Lord Mantis sound, this would be it. They cover everything here. Closer “Hole” is epic, an everything has come around now it’s time to pay the piper kind of song. Grinding, hopeless, full of dread and grand despair. This is the sound of a warrior dying on the battlefield, shield shattered, sword broken, demon harpies swarming about him, ready to claim his soul. Hell, it even sounds like ram horns are being blown in mourning. This one bends its head and drives the funeral home.

Lord Mantis have created another great record. If your thing is sludge and doom, you should get this one immediately. It’s not an easy listen, and repeated spins will bring out more (blackened) nuances. This is definitely a worthy of addition to their catalogue, and a prime example of turning chaos and turmoil into art.

In this article:LORD MANTIS, Profound Lore