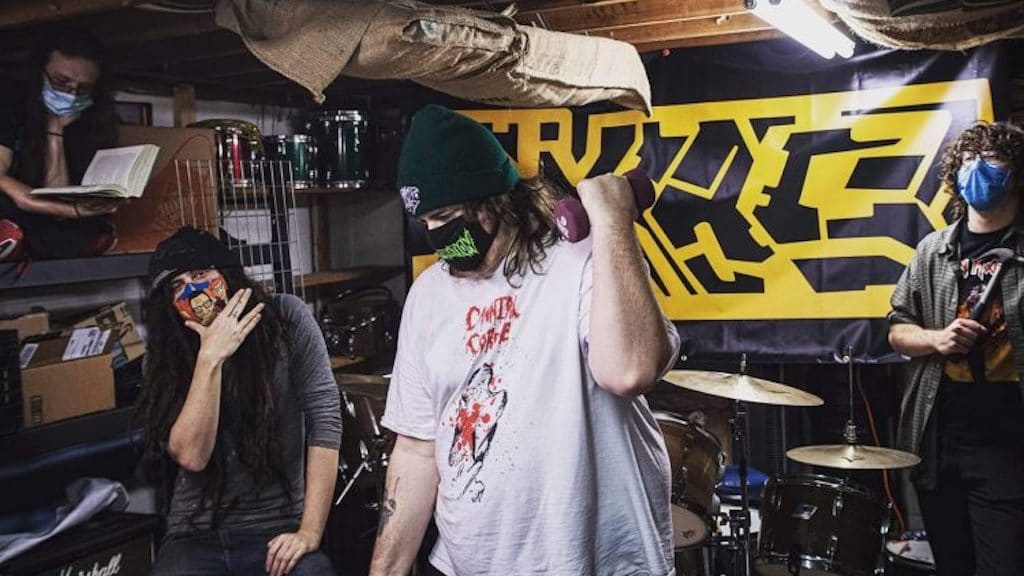 Like it or not, the east coast of the US (specifically PA/MD/VA/DC) is home to some of the best and most interesting/creative bands in contemporary grindcore. With bands like DOC, TRIAC, CHEPANG, and FULL OF HELL, it’s hard for anywhere else to keep up. Well, there’s another name that should be added to that list, and that’s IXIAS.

Originally a trio based between Baltimore and DC, IXIAS has gone through a few lineup changes — one of which had them performing as a two-piece for a bit — and is now a four-piece based entirely out of Baltimore. Their initial sound sat somewhere between DISCORDANCE AXIS and early PIG DESTROYER (Explosions In Ward 6 era), but as they’ve grown, more influence from bands such as ASSÜCK and GASP has shown up, pushing them from the status of being a memorable band to being an unforgettable one. During their existence, they’ve released a tape on ESTRANGED COMMUNICATIONS, along with splits with NECK BREATHER and DETERIORATION, and now have recorded an LP due out in December on GCBT and To Live A Lie (more on the joint release in a bit).

And that LP is why I’m writing this. Entitled Tinge, the album contains a 21 song barrage, chock full of erratic tempo shifts, oddball electronics, dissonant riffs, and shrieks and growls that would make any of the previously mentioned bands proud. What IXIAS does is something that very few try, but most who do fall flat. Like their east coast peers, they’re pushing the boundaries of grind while at the same time paying homage to the classics. To me, IXIAS is a very special band and one who I see doing great things.

The release of the LP is another boundary-pushing endeavor. There will of course be the music (vinyl release by GCBT), but there will also be a film that accompanies it (released by TLAL). This sort of thing is incredibly rare, and the closest thing I can think of is PIG DESTROYER’s Prowler In The Yard and the PITY short film, or maybe something done by BRANDON WALD on his BLACK RING RITUALS and INVOCATION FILMS labels, however, that isn’t really the same thing. This almost feels like something the BUTTHOLE SURFERS would’ve done in the early 80s, or maybe even one of the artists associated with the New York No Wave movement of the mid-late 70s. The video being premiered in this feature is an excerpt of that film, which should give you a taste of what to expect.

In this article:Featured, grindcore, HEY GENE REMEMBER WHEN YOU REVIEWED THEIR FIRST TAPE NOT KNOWING IT WAS ON MY LABEL, IXIAS

Holy shit! In the unrelenting tsunami of Metal and Hardcore releases it’s easy to forget that nobody has made a Grindcore record quite like...