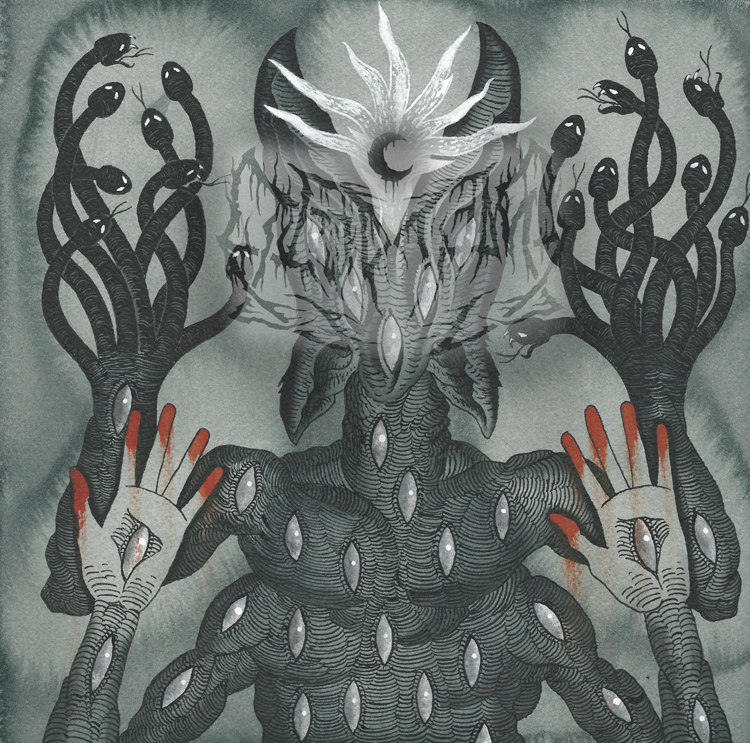 Jef Whitehead is back, and with him is also back his inseparable, disgusting, immeasurably wretched and totally fucked alter-ego: the immense, allfuckingmighty, omnifuckingpotent, Leviathan. Scar Sighted is a gem in this 2015 that has just started for two reasons mainly: one, you will not hear a metal album quite like this all year, not only for this year actually, but likely for years to come; and two, with Scar Sighted, Leviathan is FUCKING BACK, back to their most disgusting and geniously appalling craft, the one we had loved so much up until the all time masterpiece Massive Conspiracy Against All Life came to life back in 2008. Jef has been through a lot since then. He left the Bay Area, had a fallout with Moribund Cult that made him decide to put Leviathan to rest seemingly for good, moved to Chicago, got involved with Nachtmystium. Now Jef has moved away from Chicago and is residing in Portland, is painting a lot, tattooing, raising a kid (!!!), and seems to be dwelling in his most primal and ancestral instincts, and focusing on what we all have loved about him for over fifteen years: his incredible and visionary music. That said, onward with what is most important here: the music, which is something that is the only and invincible protagonist of this album, and the only thing that really matters in this smoldering pile of bile-drenched sonic wretchedness. As previously mentioned, with Scar Sighted Wrest is back at what he does best and at what we have all fallen in love with him for over the years: creating deformities in our minds that are so out there and so fucked, that you wonder how on earth your ears are even hearing such a barrage of disfigured and mutilating hatred. Many staple elements of Leviathan’s sound remain, but also, much has changed. Wrest’s demonic and robotic vocal meanderings remain, and they are the shit of the most horrifying horror movies. Vocals so out there and ruined and drenched in torment that you can’t even decipher what orifice of his body they came out of, possibly a gaping wound in his throat with a mic in it, shoved all the way down his windpipe. The guitar work is immense, and reminds us once again, who, along with Deathspell Omega, invented this wretched and disembodied way of being so awesomely anti-musical, and was one of the first people to use dissonance, atonality and completely anti-musical notes to sculpt riffs and solos that wind and twist like a daunting hallucination.

While the complexity, musical deformities, unchallenged ugliness and bizarre structures remain to this day the central pillar of Leviathan’s sound, it is also true that much has changed in Wrest’s sonic vision, and Leviathan today appears, once again, as something that has morphed and changed and that is completely unpredictable and impossible to decipher. We all knew that what came into place in a Leviathan album, what made it so fucked and bizarre, is the immense array of influences that have morphed Wrest’s vision over the years. Something that has ranged from deathrock to industrial to no-wave, to avant garde to math-rock and post-punk all the way to doom, death metal, goth, noise and ambient. Today, what seems to have played a major role in the crafting of Scar Sighted are Wrest’s most urgent and impactful influences: death metal, doom and punk, namely, all coerced under the iron fist of black metal – and you will even hear some incredible crust and almost d-beat like rampages going on in this album, something capable of turning the work’s filth knob up to a hundred.

Doom metal seems to be another not usually dominant element in Wrest’s aesthetic that plays a crucial role in Scar Sighted. Just take the entire ten minutes of the title track: ten minutes of dismal and crushing funeral doom that will hollow your soul and harrow your mind. An unprecedented moment in Leviathan’s career. The big game player and game changer here, though, is death metal. This album just fucking reeks of rotting death, and it’s old school death setting the agenda here, of course. The opening skull-crushers, “The Smoke of Their Torment” and “Dawn Vibration” are probably the most death metal Leviathan has ever been, and the songs’ grooves, heaviness and punishing riffing is something that will shove you into your grave with the rudeness and hostility of a fucking death squad. If I were to define this record based solely on my gut, I would say that Beherit is the band, and the main influence, pulling the strings on this album, because while the work remains firmly rooted in black metal, you can clearly hear how at times the music becomes punishing, raw, very simple and straightforward, aiming for total filth, for groove and a weird and sinister circularity. The guitars also appear more downtuned and loaded with filth and heaviness than in the past, something you would not typically see on early or mid-career Leviathan albums that were mostly centered around dissonance, speed, and much more cutting thrash-derived riffing. I mean, you can even hear some low and gurgling death-grunting going on here, something that may remind you of the vocal delivery seen in extreme death metal bands like Grave Miasma or Aevangelist.

I could spend fucking hours sitting here typing why this album rules, but honestly, there is so much awesome shit going on in this thing, and there are so many influences coming into play and so many styles and variations of metal here that covering the entire spectrum of Scar Sighted’s completely fucked awesomeness seems like an impossible mission, and something that words could never do justice to. What I can say is that not only is Leviathan back to its top form, but that it has also shifted and changed once again, opening the way to a brand new era in the band’s crazy history, and representing a completely new and fresh beginning for Wrest, something that will be extremely exciting and captivating to follow. Scar Sighted is like nothing Wrest has ever released before, and is why this record demands your complete and unapologetic attention. Out on 2/17 through the always immense Profound Lore Records (pre-order here).