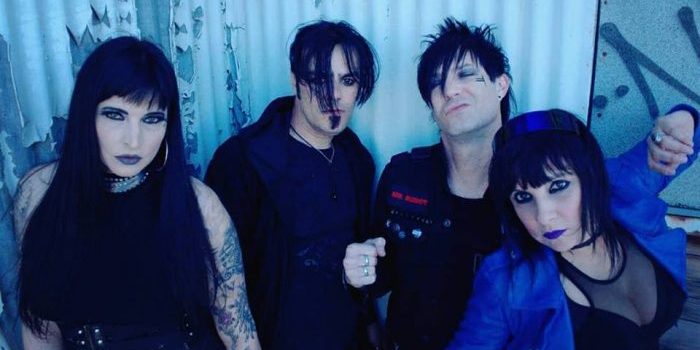 Portland electro-industrial quartet Die Robot recently released their debut LP Technopunk! This could not be a more fitting title for this masterpiece– EBM/techno in sound, but lyrically very political, the album takes you into the band’s own starry galaxy they’ve created.

“10,000 Years” launches right into a rage fueled industrial rock/pop anthem for the ages, with sounds reminiscent of 80s new wave and 90s industrial. My favorite song on the album is “Beautiful Skin”– it’s basically 1980s synthpop for a new age, and the lyrics are fantastic! “Human Eyes” is slightly more mellow compared to the intense punk tracks that define the album, but it’s still very dancey and futuristic.

An obvious highlight is “Virtual Life”, the most futuristic song on Technopunk with a fitting message. It feels like outer space electro-rock with alien synths. “Armed Forces” is similar in intensity to “10,000 Years” and really makes you want to sing along with Vince. “Futility” has almost a trip-hop atmosphere to it– a crazy powerful dance song with punk overtones. I nearly pissed my pants when I heard “Order of Death”, their incredible cover of Public Image Limited’s final track on This Is What You Want … This Is What You Get. It’s so good! I love to play it back to back with the original, they’ve truly given the song their own unique spin. Technopunk ends with another favorite of mine, “The Visitor”, which has an 80s synthpop flair.

In true industrial album fashion, there are of course remixed versions of their songs at the end! “Human Eyes” remixed by Particle Son (PDX), “Virtual Life” remixed by Synth Witch (PDX), and “Armed Forces” remixed by RMLfx. As an added bonus, they’ve included a rad cover of “Lucretia” by Sisters of Mercy as heard live at Star Theater Hive! Here is my interview with Barbie Saint!

Q: How and when did Die Robot first become a band? How did you come up with the name Die Robot?
Barbie: Vince and I were in bands together before Die Robot, but we first became this band when we moved to Portland  in 2012 with the desire for a harder, more industrial sound, and we met our first live band members. We started playing shows in 2014. The live lineup changed a few times since then. The name came about while watching the Alien movie, you know the part where Ripley fights Ash, the android. I screamed at the screen “Die Robot!” and we all looked at each other, and we knew right there that was our name.

Q: Were any band members previously playing in other bands?
Barbie: Vince and I had other bands before Die Robot. We both had a project named Pop Dolls, our synth pop / mod rock duo. He had a high school band called Diagnosis Red and I was in The Others. Vince and I have been in different bands since high school. He is from Miami and I’m from Buenos Aires,  Argentina. I moved to the States and we met in North Miami Beach in our early 20’s. We started talking music, and I think we became bandmates that day. I remember listening to his songs and thinking, I’d like to make music with this guy. In between, I had a meeting with this guy from Universal Latino with my songs and first solo recordings, and the guy told me “We can make you the next Shakira.” I was like “What the fuck, did you even listen to my music?” The rest is history. I didn’t sell out, haha! Vince and I formed Pop Dolls, which was a synth pop/mod rock duo. We released a few albums under that name: Nova, Made in Plastic, and B-Trak Models. We have approximately 90 songs recorded together. Q: I understand there’s a new lineup?
Barbie: Yes! We are very happy with our new live members, as Die Robot went though a few different line ups in four years and even though we love each one of our former members, and invited musicians, this is the best we’ve ever sounded. We have two new members, our guitarist Heath Nunes, formerly of Ill Intent, and Yvette Lera on keyboards and sampler percussion; a former member of legendary Chicago band Lick.

What is the writing process like? Who writes the lyrics?
All Die Robot songs are written by Vince and me; he is truly the best, though. We’ve been writing songs together for 10 plus years now and we are really close friends.
For Technopunk, we programmed the drums and Vince recorded some of them and all the vocals, so the recorded drums on our new album are part analog, part machine. Our producer and studio keyboardist John Case, a.k.a. John Irish (RMLfx Owner/Creator, Bound in Oblivion and former keyboardist of many bands like 16volt, H3llb3nt, and Dead Animal Assembly Plant). He recorded some of Technopunk‘s keys and synth parts. He also contributed with some great ideas and most importantly the opportunity to learn and record with some amazing gear for the first time in our career. He is not just a producer to us; we consider him an honorary member of Die Robot, and we learned so much from him. I of course recorded all the bass and guitar parts, back up vocals, robot voices and some of the synth parts as well. For our live shows, we sometimes had invited other musicians to play with us onstage, and we will continue doing that. So yeah Vince and I write the music and the lyrics. Depends on what song, but most times it starts with him. I always say that Vince is really a musical genius. Q: How long did it take to complete Technopunk? Were there any hurdles you had to deal with along
the way?
Barbie: It took nearly two years since the moment we started writing the songs. We released a few singles and a maxi single for Armed Forces during our time recording it. It was an amazing time. In the studio, it took maybe 7 months to complete, we took our time to get the “alien music like sound” (laughs). We recorded it at Retro Mechanical Labs studios and it was produced by John Case.

Q: Who are your musical influences?
Barbie: So many though, I’m a DJ too so you can imagine I listen to a lot of music. Just to name a few, Front Line Assembly, The Prodigy, Nitzer Ebb, Skinny Puppy. I love The Cure too and Depeche Mode of course. Q: What have been your favorite live shows so far?
Barbie: We played with John 5 and The Creatures (Rob Zombie/Marilyn Manson) and Stabbing Westward, those shows were amazing, Orgy too though. Every festival we played, I love playing festivals. There is something really magical and beautiful about sharing the stage with a lot of bands during a 3 day period. I loved being a part of Out From The Shadows this year, we had the honor to headline Day 1. And then playing PIGfest again (the Portland Industrial Goth Festival) for two years in a row now, those are some of my favorite shows.

Q: How has your music evolved since its inception?
Like I was saying, we were a bit more synth pop, mod rock, and with time, we just became harder,
punker and a hell of a lot more industrial. (laughs) Q: What’s next in store for Die Robot?
Barbie: We’ll be going to Seattle Friday, September 14 to play at the Hard Rock Cafe with God Module, Murder Weapons and Pill Brigade. This will be the first Industrial show at this Hard Rock and we are totally stoked about this! And then on November 10 we will be playing with Clan of Xymox at the Star Theater, this show is part of their Days of Black Tour. In December, we will do another west coast tour (laughs) but just going through California, with a bunch of shows again in Sacramento, San Francisco and this time around, Los Angeles.