Now returned from an action-packed two week tour across Europe to promote their new Deviances album, deathrock band Virgin In Veil took the time to discuss their music and the tour with us. Virgin In Veil boasts a strong lineup: Jacques Staph on vocals/bass (Masquerade, Secular Plague, ex-Sleeping Children), Suzi Sabotage (Masquerade) on synth/backing vocals, Rudy Soininen on guitar, and William Freyermuth (Masquerade, Secular Plague) on drums. Hailing from Helinski, Finland, the band has only been around for the last year and a half, but have already made plenty of traction. A demo was released only two months in, and their debut EP, The Glory Hole, was released nine months after that. Their debut album, Deviances, made its release on Danse Macabre Records on October 14th, 2016. You can stream it here.

Virgin In Veil’s sound can best be described as mid-00’s revival deathrock with punk-style vocals. The lyrics are mostly sexual and political in nature. They have a fantastically dark yet energetic stage presence which extends beyond the stage. They also have a reputation for fun, beer-fueled debauchery! Their recent tour across Europe had them partying in Poland, Italy, Germany, and Austria.  Prior to this, they’ve also played in Russia, California, Nevada, Mexico, and Sweden. You recently returned from your Deviances Tour across Europe! How was it compared to your previous tours?

Jacques Saph: It was the best tour out of the three we have done together. Audiences were fucking great and most venues were packed. We travelled over 7000 kilometers, crossed 11 borders, got pissed off by the bastards in blue 5 times, all over two weeks. It was very exhausting, but also a lot of fun.

Suzi Sabotage: It was quite a marathon, since the amount of shows from the previous tour were doubled, and of course the fact that we played two shows a night counted. It went astonishingly well, this Virgin in Veil line-up is tighter than it ever was.

William Freyermuth: Best tour so far, Rudy has brought the band to a new level.

Out of every city you’ve toured, which has been your favorite?

Jacques Saph: Vienna, I’d say. The city is beautiful, and the audience there was amazing. They welcomed us and enjoyed every second of the gig, as we did. Milan was super fun too, it was in a squat with a relaxed atmosphere. People pogo’ed a shitload!

William Freyermuth: Every gig had its charm. Milan had a great crowd and I had the time to visit the city, which was a highlight. Mülheim also deserves a mention.

Rudy Soininen: Erlangen and Vienna. There was a great atmosphere in both of them. And at the venue in Erlangen we had the best meal of the tour I think. As a vegan it’s hard to find proper food from gas stations, so it’s always pleasing if at the venue you get something more to eat than a salad or chips.

Could you share a crazy tour story with us? It doesn’t have to be from the last tour.

Jacques Saph: Haha, everyday of touring has its own crazy stories. I could write a fucking book about it. What do you wanna hear? Trashed gas stations? Sex on the roof of the hostel? Asses flashed to truck drivers while driving on the highway?

Suzi Sabotage: It was incomprehensible, the amount of times police bothered us during this tour. The worst occurrences were in Germany and Austrian/Czech border, where they kept us longer than anyone else we’ve seen, without giving us any reason. I didn’t know a Finnish van would be so suspicious out there.

William Freyermuth: Waking up while the organizer is trying to spoon you…

Jacques Saph: Haha, that was golden!

You guys formed this band in January 2015 and released a demo after only two months. What were your motivations behind forming Virgin In Veil? Was it filling a void your other bands could not?

Jacques Saph: Well, it was quite simple, I was playing with Secular Plague for three years. I enjoyed it a lot, but I wanted to play deathrock again, but with a huge punk influence; more than the average deathrock band, I’d say. I wanted Virgin in Veil to have a strong sense of melodies and ambiences, but with no compromises on the sound, which I wanted fast, aggressive and disturbing.

Your lyrics are very politically charged. Does one member write them or is this a collaborative effort? And what is the meaning behind the name Virgin In Veil?

Jacques Saph: Lyrics are either by me or by Suzi, or sometimes we write them together. It mostly occurs when I start something and then lack inspiration. Suzi takes on and finishes the fucking lyrics in no time.

The name “Virgin in Veil” mixes sex and religion, and I always find the mix of those to opposites subject interesting, and yeah, arousing.

Suzi Sabotage: I have a serious surplus of lyrics, sometimes Jacques takes one from there or most often I write a songtext especially with Virgin in Veil in mind. Taking a stand and not only chanting about death or obscurities is highly important to us; if one of our fans’ awareness broadens thanks to us, that is one of the best rewards there is.

Jacques Saph: Yeah, at some point, Virgin in Veil can be seen as the successor of Sleeping Children. The same sense of catchy melodies, haunting ambiences, sexual imagery… but in a more mature way. At the time, I was like 22, and not super savvy in politics and history as I am now. So Virgin in Veil lyrics are as decadent as Sleeping Children’s, but they are more mature, deeper. We often cover Sleeping Children’s “Between Your Legs” during live gigs, and it’s very fun to play this song again over ten years after I wrote it.

Apart from Sleeping Children, Rudimentary Peni is a super huge influence to us. We don’t sound like them, but their musical approach has inspired a ton of riffs for me. I should also mention Radio Scarlet, especially for the guitar parts.

How long ago did you move from France to Finland, and what are the biggest differences between the two as far as goth subculture, from your experience?

Jacques Saph: Just two years ago, France, especially Paris, had a super vivid goth and deathrock scene in the mid 00s, with bands like Deadchovsky, Jacquy Bitch, The Trespass, Violet Stigmata, etc. It was cool. I don’t have much more connections with the Paris scene nowadays, but it seems to have faded away, sadly.

Finland is quite a great country for alternative cultures, as most people are more open minded than in the rest of Europe. But still, the goth scene here, let alone deathrock, is super small. There’s a punk scene which is quite popular but largely overrated, with most bands just being alcoholic losers trying to replicate the sound of the 80’s Finnish scene. That being said, there’s many great bands here in Finland, my personal favorites being Kuudes Silmä and Fate VS Free Willy.

Your music videos paint quite a complete picture of the band; you guys really know what you’re doing! What first got you into the goth subculture? Was it a particular band/album?

Jacques Saph: I first got into punk when I heard the Sex Pistols Nevermind the Bollocks, but it’s The Cure’s Seventeen Seconds that introduced me to darker music.

Suzi Sabotage: Darker music captivated me around 2009 or 2010. I was also then intensely listening to hardcore bands with gloomier vibes, like Pyhäkoulu.

Rudy Soininen: Musta Paraati when I found them in 2008. Their album “Peilitalossa” is still important to me.

I am sure your other bands keep you quite busy, but what do you guys like to do when you’re not working on music? Do you have other artistic outlets?

Jacques Saph: I work as a freelance web developer. When I’m not playing music or coding stuff, I enjoy spending time at home with Suzi and Valentino, our kitten. And from time to time, going to a good party with friends and let the debauchery do the talking. I’m also a whore for history and geopolitics, so I watch tons of documentaries, and read a lot about subjects that interest me.

Suzi Sabotage: I adore to hang around home with Jacques and Valentino, downshifting with books, music and films, but also actively promoting and working for our bands. I love to frequent the rehearsal room to do some singing and other instruments – and to have a night out now and then.

Rudy Soininen: Well, I live with the love of my life, too, and we have four rats and a hamster. How can you have the time for anything else when you already have five children to take care of, haha?

It’s now been over a year since you toured America. Any chance we can have you back soon?

Jacques Saph: As soon as guns and the death penalty are outlawed! More seriously, I don’t have any plans for it now but I’m sure we will come back at some point.

Suzi Sabotage: We are always up for gigs, and quite a many of them are needed in faraway places like the U.S.A. to make a tour, otherwise we simply cannot come. So please offer us a show or a few to help us come back, if you are reading this, or recommend us to a promoter. Doesn’t matter where, if we can gather enough gigs in the area we will do it!

William Freyermuth: Just tell me where and when and I’ll be there. 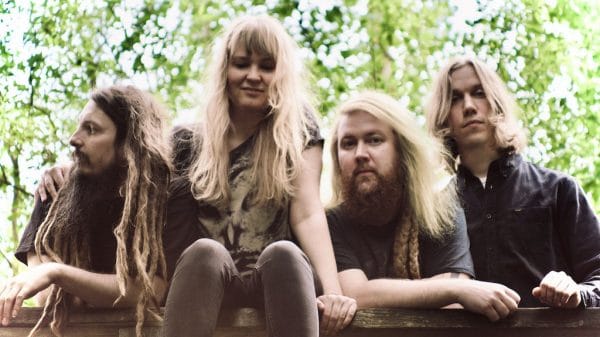