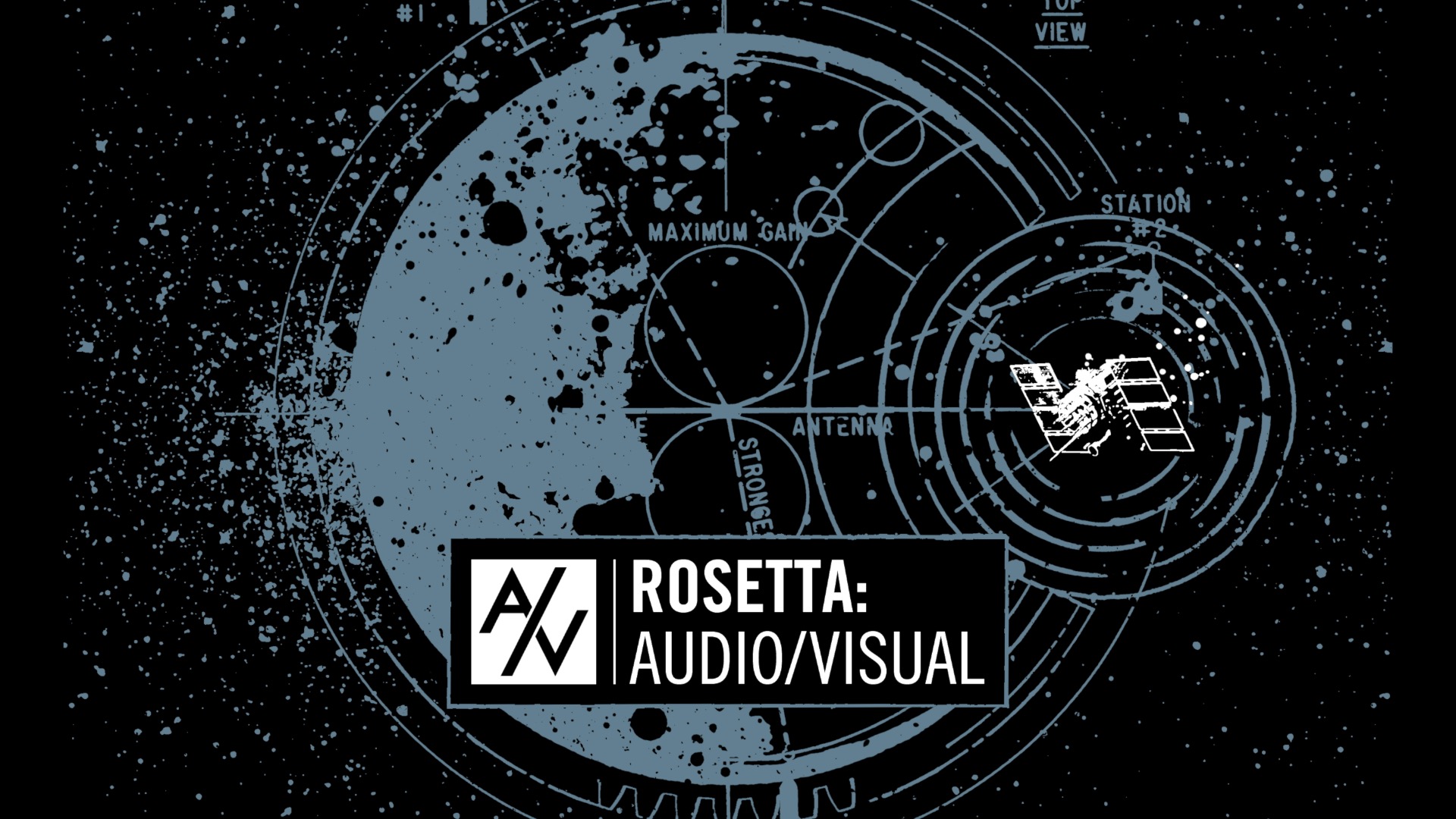 At the end of 2014, Justin Jackson released a four years in the making documentary about the post-metal band Rosetta and their history entitled Audio/Visual. The score of this flick was also made by Rosetta themselves, and became available on their bandcamp earlier this year. I wanted to learn a little more about this project, because I really enjoy documentaries that makes you feel closer to a band, as well as the score, which was incredibly sensitive for an uncharted territory. I got to talk with their guitar player Matt Weed, who found a way to answer my questions during the recording of an upcoming Rosetta album, so expect to hear from them again by the end of the year. Audio/Visual forced you to look back at some parts of your life; aside from the Translation Loss issues, do you have any  regrets about choices you made or didn’t make?

Matt Weed: I wouldn’t say we have regrets. I think it’s one thing to understand how the choices that you made in the past continue to affect your present, but something different if you feel bad about it or wish you made a different choice. I think we’re all comfortable with the choices we’ve made. Obviously, we could have handled the relationship with TL better than we did, but I’m glad that we learned from that experience and have continued despite the challenges. We definitely have no regrets at all about going independent and trying to pursue a future-oriented business model rather than being stuck in the old and obsolete music industry paradigms.

When I watched it, something struck me, a phrase from Michael Armine, saying that the difference he wanted to make in the world was in classrooms, not on stage. I found it extremely powerful, because music is definitely something that can help people emotionally and on a sensory level, while miseducation is truly a deadly plague. Would you care to deepen that thought?

There were a lot of personal things said in this flick, from daily struggles to childhood wounds to label issues. Was it therapeutic for you to speak those things out loud ?

Maybe for Armine it was therapeutic. For the rest of us, I think we had mostly come to terms with those things. Armine was the one who was friends with the TL guys before Rosetta signed to the label. The rest of us only met them in the context of the business relationship, and became friendly with them after that. Armine had the most to lose from things going bad, and the most to work through in retrospect.

It’s probably a little dumb to say, but I feel really close to the band now that I’ve seen it from the inside. When you listen to the discography of a band, you never think about the struggles there could be behind each release – was this one of the objectives behind Audio/Visual? To use your case as a launching pad to make people understand the intricacies of the music industry?

Well, as I’ve said elsewhere, the documentary was not our project. It doesn’t present our point of view; it presents Justin Jackson’s point of view as a third party observing us for a few years. We had no editorial control over any of the content. As such, we didn’t really have any particular goal for the film. It’s the story Justin wanted to tell, not necessarily the story we would want to tell ourselves. I think if people come to understand what it’s like to be in an independent band as a result of seeing the film, that’s great. But the reality of people’s lives is always more complicated than can be presented in a 60-minute film.

To see how many money problems you’ve had, I think it’s fair to say that passion is what’s keeping you alive; do you manage to find this kind of passion in today’s bands?

I don’t know. A lot of bands don’t seem to last very long. Most of the time, a band gets big, has a 3-year period of popularity, then breaks up or fades out of the spotlight. I really respect bands that can keep going and keep evolving over a period of 10, 15, 20 years or more. I think now I understand what an amazing accomplishment it is for a band like Neurosis or Deftones to last for 20 years. Those bands are institutions, their reputations transcend genre, style, or branding.

Do you at some point plan to release the documentary on a physicaformat?

Justin plans a DVD release, but I don’t have details on when that will happen. He’s doing that on his own. I know it won’t be available from the band, but only from him.

Was releasing the whole score of the documentary on bandcamp important to you? Because it’s not easy to notice it inside a film where you carefully listen to what people have to say ?

Justin asked us to do the score. We did it for free, but in exchange we retained the right to release it as an album. That was important mainly because the revenue generated by releasing the score album helped us pay for the new full length recording. Since we have no label anymore, we have to finance everything ourselves, and that means we have to be very careful about money. Any source of income is helpful. I think it was nice to be able to give the fans something different from our usual sound, and at the same time help pay for a new record. I think the score stands on its own as an interesting musical piece, even if you haven’t seen the film. And the tracks on the album are significantly longer than what appears in the film.

The album Audio/Visual is quite far from what you deliver usually; how did you manage to create such a solid piece of ambiance? Was writing a score for a movie one of your life goals?

Honestly, I had never thought about doing it before Justin asked. Now that we’ve done it, I know I enjoyed the process, as different as it was from the usual process we go through. I’m interested now in working on scores for other independent films and video games. So there may be more of that in the future.

Do you have any other musical projects that collide with cinema or documentaries ?

Not right now. But we might in the future.

Last year you released another EP called Flies to Flame, back on Translation Loss. Did the making of the documentary make you reevaluate the relationship between you two?

No. Flies to Flame was actually written and recorded well before The Anaesthete was written. We finished it in February of 2013. It was the last record on our contract with the label. They were kind enough to allow us to release The Anaesthete independently before Flies to Flame came out, because they just weren’t able to do the Flies to Flame release until late 2014. But I’m glad that it finally did come out. Even so, Flies to Flame predates The Anaesthete musically, and should not be interpreted as a new direction for us. It was more of a lo-fi retrospective on our past work, before moving on to new things.

Since it took four years in the making, where did you find the strength to keep going forward with this project?

Well, as I said, it was Justin’s project. He did all the work. But we did become friends with Justin through the process, because he was around for a long time. We were entirely preoccupied during that period with trying to figure out the best way to move forward as a band. There was a lot that happened during that time that Justin decided not to put in the film… troubles that had nothing to do with the TL relationship. We bought a van for $6500 that only lasted for 9 shows and then died and had to be scrapped. We were evicted from our practice spot by the police. It was terrible, we had no money and that was why it was so important for The Anaesthete to do well. It did, and things are a lot better now.

On the special website for Audio/Visual we can see in the description part that you aim for spiritual freedom. I’d like to know your definition and/or your view on contemporary “freedom.”

Freedom means different things to different people, obviously. I don’t think freedom includes being free from hardship. I think it means having individual sovereignty, having self-determination. Freedom includes living with the consequences of the choices you make. DIY is important to us not because it’s a kind of dogma or lifestyle, but because doing things yourself means being able to say NO to the way that rich, powerful, corporate forces want you to operate. It means being able to work in the way that you feel comfortable working, and embracing whatever comes as a result. It means choice, and it means responsibility.

With all the Rosetta spacecraft movements last year, did you get more messages about the name of your band ?

We got tons of messages, from all over the place. We even did a short video for the “Wake up Rosetta” social media campaign. We were happy to help out because we thought the research mission was fascinating.

Finally, the ending question, if I went into the library of Rosetta, what books would I find ?

It would be different for each of us. Armine likes science fiction, like William Gibson or Philip K. Dick. I like that stuff too, but I also like to read about late 20th century history (especially the Cold War), and I’ve been reading a lot about environmental science lately. I always loved the novels of Cormac McCarthy. Blood Meridian is my favorite novel ever. Dave really loves Sword and Brush by Dave Lowry, from which a lot of the song titles on The Anaesthete come.