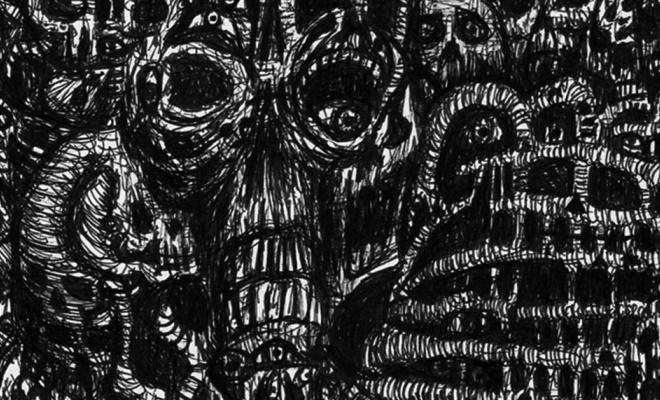 A few months ago the name Coltsblood may not have meant a whole lot to you, but tours with Watain and signing with Candlelight is sure to change that, and more importantly, this devastating record that they call their debut album, Into The Unfathomable Abyss, is destined to do wonders.

Doom and sludge make up most of Coltsblood’s palette, but the band has opened the gates to allow many black metal strains to seep into the mix. With this is mind, there are some similarities to their fellow Liverpudlians Dragged into Sunlight.

First song proper ‘Beneath Black Skies’ is a tumultuous doom track that builds on the tone set by intro ‘Valhalla Awaits’.

The moments of faster tempos give this album a whole new depth though, especially the uncharacteristically short two minute barrage of ‘Blood’ with its searing BM riffs that set off a firestorm of aggression, and lodged in between the doom dirges it makes an unexpected but welcomed change of tone and vibe.

‘Abyss of Aching Insanity’ changes back the pace to that of a more indolent one and is not only an apt title but it’s Coltsblood at their most lethargic and agonizing, with a glacial trudge in the guitar work that is eventually met by ringing lead guitars that vaguely recall Ea.

‘Grievous Molestation’ is rife with Burning Witch riffs, but the deeper vocals from vocalist John add Coltsblood’s own tinge to the severe sounds, which is something the band has accomplished with the record as a whole.

To end, the band allows the severity of Into The Unfathomable Abyss to settle in with the droning outro of ‘Return to the Lake of Madness’. This is a towering debut album for any band to make and quite the statement of intent too. File Coltsblood under: ones to definitely watch.