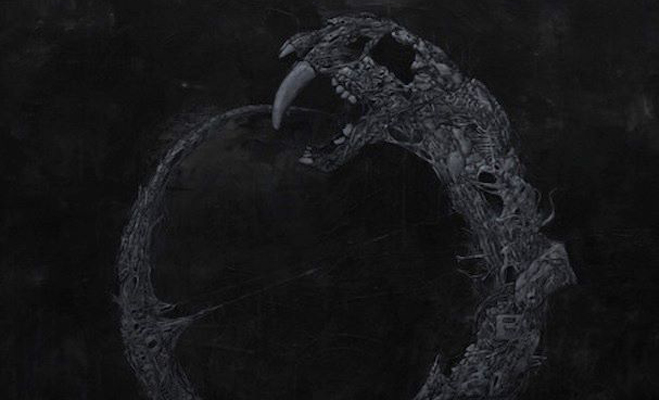 IV.I.VIII continues to punish for its entire running time, the album spinning with filthy progressions and consistently harsh vocals from frontman D. His voice writhes with a bilious aura that slips and pours into the cracks of the song, digging deeper and deeper into unclean truth. The screamed introduction to “Black Tears” showcases his range, which passes from higher registers to bottomless growls all too easily. The track segues from a terrifying missive to a groove-laden chasm with unnatural effortlessness, yet it never loses that underlying sense of danger. The guitars pulse with horror and the drums hold it all together with a beaten rhythm that often shines through the murk. Sanford Parker’s production here is massive, and each element is given the freedom to reign without detracting from the bigger picture.

“Lust Vs. Vengeance” is a disgustingly heavy-toned beast, and Coffinworm dredge unknown depths to generate a feeling of total exhaustion. The drums gallop while the dissonance of the guitars breathe a mist of tripped-out vibration over the closing minutes, with D. once again setting fire to the shadows with that ferocious roar, before “A Death Sentence Called Life” bursts through the darkening clouds to grab you around the throat with a vile intensity. This final track twists and turns with sheer abhorrence, the raging and violent strength hammering through the drums and relentless guitars to stamp its point all over the ground on which you once stood. It’s blistering, demanding and cruel, and IV.I.VIII ends on an immense trip to the absolute nadir of the human condition. Coffinworm are here for your soul and there’s truly nothing you can do to stop them.

IV.I.VIII is released on March 18 via Profound Lore Records and is available to pre-order now.