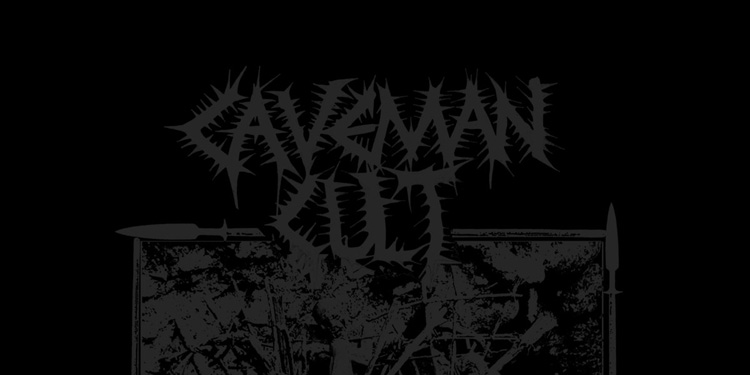 Caveman Cult. Either you love the name or you hate it. That seems to be the general consensus with most when they first hear about this band. However you feel about it, though, (I personally think its awesome, fuck off), it is undeniably fitting, for the style of music played by Caveman Cult might as well be the very definition of barbaric and primitive. Raw and relentless, this trio unleashed their first demo Rituals of Savagery just nearly two years ago to critical acclaim from all fortunate enough to have met its acquaintance. As hammering and crushing as they come, Caveman Cult quickly established themselves as a force to be reckon with in the American Black/Death underground and they’re back this summer with their first full length Savage War is Destiny.

Doubling down on their approach, Savage War… takes the raw aesthetic and battering style of attack employed on their demo and maximizes it. This might be hard to believe if you just take my word for it, but you’ll know the truth for yourself the second “The Bludgeoning” begins after a short, noisy intro; and even more so after 31 minutes+ of uncompromising, cranium-cracking goodness has decimated your hearing. Piercing screams, downhill drumming, and distorted, reverberating strings collide to form a violent cacophony on Savage War… and I don’t believe most can even properly digest its contents in a single listen – or five – or ever.

It’s that kind of release. Just like it’s that kind of band name. Either you get it, or you don’t. As a friend of mine recently said, it’s “killing music at its finest.” Be you without an insatiable thirst for chaos and death, Savage War is Destiny might just be too much for you. It takes five tracks before you’re even given a breather, as Caveman Cult beat and batter you with barrage after barrage of bloodthirsty, mayhemic fury.

Setting the standard for what may be called War Metal in the modern era, Caveman Cult roar through this release with notably some of the most focused, tight knit, devastating drumming in the underground today. Yet, I don’t mean to box it in as being technically proficient either, for there is a lot of flare, personality, and unpredictability in the workings of Rick Smith, as his furious cascade of rolls and blasts are as explosive as they are well executed. Examples of all these traits are found in tracks like “Iron Scourge” and “Ceremonial Disembowelment,” where you’ll notice a lot of variation in tempo and rhythm along with sudden, jolting bursts of unforeseen blunt force trauma.

These melee attacks are given voice by very pronounced, commanding gutturals that glorify strength and utter contempt for the human race. The sooner we’re wiped out, the better. It’s no wonder then that an album called Savage War is Destiny seems to get more violent and unrelenting as it goes along. By the time you get to “Death Before Surrender” and “Supremacy of the Savage Hordes,” you’re experiencing break neck levels of devastation, especially after all that has come before it. The cumulative effect here cannot be understated. Just when you think Caveman Cult were going to stall out, they hit you harder and harder with savage determination. In essence, what we have here is a slab of bestial warfare that stands on its own two feet and has few worthy contemporaries in today’s modern age, for few have endeavored to epitomize the barbaric, primitive nature of man the way Caveman Cult has with such overpowering force. If you can stomach the chaos of it all to give this record the repeated listens it deserves, you’ll find yourself more than addicted to its breakneck pace and penchant for its occasional break in the action with a slower, headbangable riff or what might be called a more mid tempo section (comparatively speaking), that is often abruptly interrupted with an awesome drum fill or with a sudden riff change and avalanche of blast beats. And it’s these moments of sudden explosion that will astound you and keep you coming back for more, if not the overall relentless nature of the music in general. Let it be known to all who dare to lend their ears: at 31 minutes and change, the debut album from Caveman Cult might be a quick one, but not a painless one, and as we all know, pain lengthens time. Wimps proceed with caution, this release is NOT for the faint of heart!

Simple but well-executed, Kriegzittern and Minenfeld take the basic death metal template well-known to fans of Hail of Bullets and make it their own....