Alright, I’m still recovering from Bloodshed festival over the weekend of 14 and 15 September in Eindhoven’s Effenaar. Calling the festival’s line-up rich is an understatement which doesn’t only apply to the main festival days of Friday the 14th and Saturday the 15th, but Thursday’s pre-party and Sunday’s Afterbleeder bands as well. Unfortunately I wasn’t able to attend the pre-party, but the running order consisted of Hetze, Devoured Elysium, Dead Loyalty, Pressure Pact, Ill and Punished Earth. Friday kicked off with sludgy doom Confusion Master from Germany who had just released their debut in April. With a sludge kind of a warm up, next up was Ghettö. These Bordeoux boys played devastating powerviolence/fastcore which I wish lasted longer. Kit-destroying drums that almost sound like a machine gun, riffs bonding grindcore and punk, and hellish shrieks of agony and everything ugly on the planet.

Looking upon the running order, most bands played a 30-minute set, with a few exceptions. It did make me wish that some bands played longer, but at the same time, those 30 minutes might’ve pushed the bands to give their best in this short window – because bands truly did deliver. The timetable also carried a ping-pong running order, meaning when a band finishes on one stage, another starts playing at the other and so on, with the exception of the noise stage aka crustbus, but we’ll get to that later.

One of my favourite discoveries of the weekend: Like Rats. With a banner looking like a blackened Dead Kennedys logo, Like Rats from Chicago delivered merciless sludgy death metal with hardcore elements and interesting riffery. Sounds like quite a mix right? Check them out.

The quickening never stops. With lyrical themes that deal with vegetarianism, animal rights and hate for the human species, Boak unleashed unforgiving grinding fastcore upon the second stage. Props for that ‘Kill the humans and save the forest’ Princess Mononoke shirt guys!

By now more festival attendees were arriving and the pits were starting to get more violent and real as the timetable escalates. Another great discovery for me was Fredag den 13:e from Gothenburg, Sweden. In general, I’m a sucker for crust punk or d-beat bands, but what attracts me even more to this territory of punk is when a crust band embraces atmosphere and metallic elements, which is what Fredag den 13:e offered, I felt, while maintaining rock n’ roll in the mix.

The line between d-beat crust and metal continued to blur at Bloodshed. Hailing from Mannheim, Germany, Hellknife brought crunchy crust riffing, jawdroppingly fast drumming and black metal passages in the riff here and there which made for a tasteful combination of influences.

Une Misere was next, but I wanted to check out the noise stage taking place at the ‘crustbus’ because it had music only two hours a day and they were clashing with anticipated acts the next day, so I thought this was a good time. I caught DMDN who was mixing with 3 record tables at the same time. I don’t see that often. I don’t see music in a bus either everyday. Needless to say, everyone should experience music in a bus. Every concert should be in a bus. I went back to the venue and caught the end of Une Misere which included a cover of Raining Blood’s intro.

French grinders Whoresenation blew my fucking mind. As described on their bandcamp, it’s “straight-forward, relentless, raw and punishing grindcore onslaught” which describes their sound to the point, and man, could they play. Tonio on drums was one of the best drummers I’ve seen. They also just dropped their sophomore full-length in April. Albums-of-the-year listmakers and grindheads, take notes. 20 songs – 20 minutes.

Spectral Voice. I’ve been into them since Necrotic Doom. I knew they’ve been up to something, and when Eroded Corridors of Unbeing came out, it was one of the best releases last year in my books. It was the first time I see them at Bloodshed and was easily one of the best performances on the line-up. Spectral Voice’s necromancy emerged under heavy use of fog. Their switch between pure almighty doom and relentless death metal is amazingly fluid. Heavy and mystic as fuck.

Friendship from Japan played sludgy grind that refilled the void in the audience’s heads with chaos. No mercy. Their vocalist spent more time singing in the pit than on stage. Afterwards, Afgrund offered a good old-fashioned taste of d-beat brewed Swedish death metal.

Having missed Dawn Ray’d at Roadburn earlier this year, I was stoked to check them out live at Bloodshed. This three-piece anarchist black metal band put on a remarkable, unforgettable and vicious performance. Cold guitar riffing tinged with violin passages, ferocious vocals, and a politically and socially charged lyrical theme. Black/death metal outfit Nightfell consists of the prolific Tim Call (part of Mournful Congregation, Weregoat, Saturnalia Temple, etc.) and Todd Burdette (Tragedy, His Hero Is Gone, Warcry, etc.). Their sound ventures beyond black/death as their hymns involve sludge-laden riffs and doom hypnosis.

I caught about 10 minutes of Japan’s energetic hardcore Palm. Even though I would’ve loved to see more, I had to go camp for the beast playing up in the next slot, Demilich. The relevance of their only and legendary studio album today, Nespithe, is proof that they have stood the test of time. I’m a huge fan of old-school Finnish death metal, but Demilich is probably my favourite of the bunch. Needless to say, it was my first time seeing them and allegedly their second time in the Netherlands since Netherlands Deathfest 2016. They conjured their avant-gardist, twisted, weird death metal flawlessly, it even sounded better than the recording.

Ultha followed up with a trance-enducing atmospheric black metal set which was also the first gig to feature Lars from Sun Worship on second guitar. Agoraphobic Nosebleed put on an exclusive European performance which was great fun. Having been beat and up after a long day, I had to retire to bed to charge up my batteries for the next day, missing Massgrav who closed the night.

I had unfortunately missed the day’s opener Raylin as I was digging into FOAD Records’ wax den, but I was still able to hear them annihilate the stage. My first band to see were death metal locals Abrupt Demise which ought to have woken me up. At the second stage, Discomfort from Italy conjured up blackened grindcore/hardcore which may also fall within the crust territory. Sick set and definitely worth checking out. Horsebastard from Liverpool utterly obliterated the stage (and ears). They play insanely fast, enraged and hateful fastcore/grind. Probably one of the fastest bands at this edition of Bloodshed. Formed originally by members of Aborted and hailing from Belgium, Leng Tch’e upped the ante with their ruthless deathgrind. Fun fact: Leng Tch’e (or lingchi) was a form of torture and execution used in China from roughly 900CE until its ban in 1905. It translates to slow slicing and is also known as death by a thousand cuts (which is the name of Leng Tch’e’s debut).

Citizen Patrol’s cancelled their appearance, but Pressure Pact who played the pre-party were able to play an extra set, replacing Citizen Patrol, and bringing the old-school hardcore punk sound back to Bloodshed’s weekend. LA Sludge veterans 16’s last day of the tour with Primitive Man culminated in Eindhoven. Followed up by another energetic and violent set of Japanese hardcore punk by Encroached.

Being a personal favourite and one of my introductions to crust, Extinction of Mankind was a real special treat for me to see. Dirty, riff-driven, sludgy and heavy. What else can you ask for? Satanic speed metal warriors Bütcher put on an memorably epic performance. Imagine 80’s speed metal meets Mercyful Fate and Midnight, blending fast riffkraft with harsh, blackened vocals as well as King Diamond-esque falsettos. Just when I thought this couldn’t get any more rad, they dropped a cover of Agent Steel’s Agents of Steel. I urge everyone who hasn’t heard these dudes to check them out.

Primitive Man’s huge bestial sound of nihilistic sludge completely zombified me (and others I assume) and border-lined drone metal sometimes. Full of absolute filth and grime, and another personal highlight of the festival. Then I went to see Pissgrave. I’d never heard them before. Less than 1 minute into the set and I thought “this is the best thing today.” Not to undermine the other bands at all, but I can’t remember the last time a band melted my face this hard. Upon checking them out online after the festival, I saw that they’re usually labeled as death metal (I could definitely hear early Deicide influence in there), but what I saw was a rather chaotic mix of black/death metal which could easily equate to war metal. One of the most disgusting and vile sounds I’ve ever heard live. Though I’d discovered a bunch of amazing bands at Bloodshed 2018, if you pointed a gun at my head to choose my best discovery, I’d choose Pissgrave. Enough talk, listen to their Suicide Euphoria which came out on Profound Lore.

As the evening was coming to an end for me, I watched Enemy Soil as I was lowkey sinking into sadness. Despite the badassity of the line-up, Necrot’s been my most anticipated to see along with Demilich and Spectral Voice, and was a main reason for me to buy a ticket. Unfortunately when the timetables announced, their timeslot was to start 10 minutes before I was supposed to catch my long ride back to my mancave. So as soon as Enemy Soil wrapped up, I sat watching Necrot rehearse. Too bad for me, their rehearsal went fast and smooth. I got to see only two songs, which were the first two of their debut of death metal perfection Blood Offerings. They sounded stellar. With a heavy heart, I packed my stuff and headed back to my home destination, having to miss atmospheric crust legends Tragedy. Friends’ and peoples’ response after the show was extremely positive. Below you can see a part of their fierce set.

Shout out to Doomstar Bookings for putting this beautifully filthy festival up, all the bands, Effenaar, the vinyl and CD outlets and the people. Special thanks to Jvh013photo (Jurgen van Hest) for the fantastic captures of the event! Listen to the Enchanted Sounds of LYCIA "Rewrite" 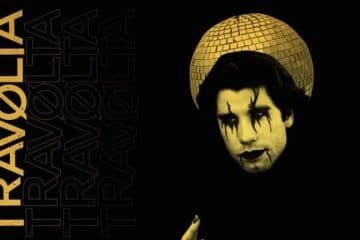 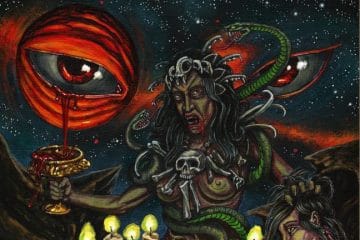