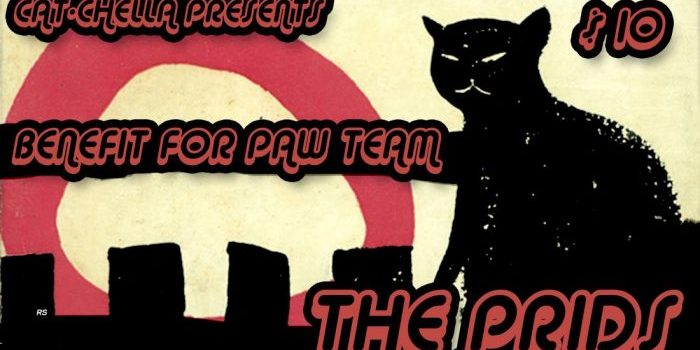 Each year, the Cat-Chella benefit show raises funds for a different animal welfare beneficiary. This Thursday at Holoscene you can see four of Portland’s best post-punk bands while supporting Portland Animal Welfare Team! PAW Team’s mission is to provide free veterinary care to the pets of homeless owners and those living in extreme poverty. Show starts at 8pm, only $10! Darkswoon are a bombastic shoegaze band not unlike Cocteau Twins, especially vocally. I got to see them at one of Dave Cantrell’s Songs From Under the Floorboard showcases earlier this year and they completely blew me away! They’ve got a heavily textured sound perfected to dreamy electronic bliss.

Vibrassae are another gem on This-a-Way Records. Defining the angelic side of shoegaze, their music is incredibly emotionally evoking. If beautiful sorrow had a sound, it would be Vibrassae. They really know how to pull you into their own atmosphpere. As an added bonus, Aaron has a pretty great trick with a screwdriver you have to see!

Arctic Flowers lean on the punk side compared to the rest of the lineup, breaking things up as the night continues. If you peruse Cvlt Nation regularly and haven’t heard of Arctic Flowers, shame on you! A leading deathrock band during the revival period nearly a decade ago, these guys sound straight out of the 80s.

The Prids are Portland’s pride and joy, having been established in the 90’s and continuing to evolve and become a major influence for a slew of other bands! Their album Do I Look Like I’m In Love? from early this year is nothing short of a masterpiece (here’s my write-up in case you missed it!). To say Cat-Chella 2 will finish out strong is an understatement. DJ Wednesday will be playing between sets! More information can be found on the Facebook event page.