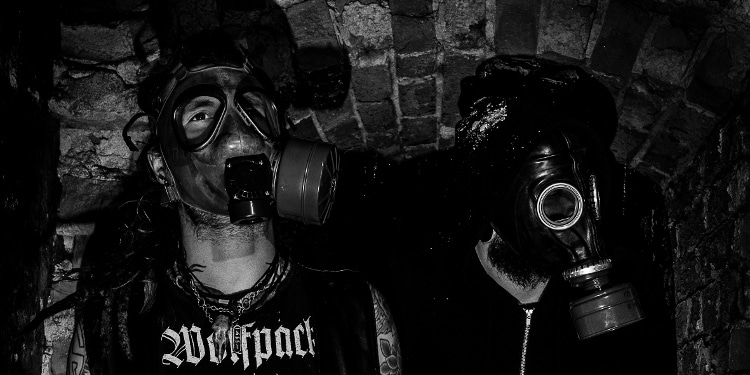 Swedish anarcho-black metal punks TRESPASSER have recently unleashed their incinerating debut album Чому не вийшло? AKA Why Didn’t It Happen?, a firestorm of anarcho-punk and black metal annihilation that sounds the alarm of the apocalypse, bringing back to mind the glory days of bands like Iskra, while also packing in the fury and malevolence of classic bands like Marduk, Watain etc. To remark on the exceptional work today we’re honored to unleash their brand new video for the album’s opening track “Hunted Like Wolves”, and below you’ll also find an exclusive interview with the band as well as tour dates to their first ever tour coming to pillage a town near you. Rage on!

Trespasser was formed by me, XVI, to balance the right wing tendencies in the black metal sphere. Being repulsed by the fascistoid views held by the bands I worshipped, and remaining unimpressed with outspoken left-wing bands lack of brutality and musical skill, I set out to create the record I
longed to hear but had given up hope to find in the record stores. Brutal and relentless anarchist blast-beat mayhem. After recruiting Dräparn on vocals we hit the studio. The result is TRESPASSERS debut LP “ЧОМУ НЕ ВИЙШЛО?”.

This is a seven song opus dealing with the history of anarchism.
Although centered around Ukraines Nestor Makhno and the Makhnovshchina – inspiration has been found in a wider context of anarchist literature, songs and culture.

Let me be clear. This is not black metal. Its everything black metal is not.
Its un-orthodox, non-magickal, un-true and un-cult. This is political music
and these are anarchist anthems. It is materialist and anti-fascist music.
I do acknowledge the connection between religion and politics, but I puke on black metals self-centered ego-worshipping and quasi-spiritual rituals.
Liberation and emancipation lies not in individualist neo-spiritualist
introspection. It lies, like always, in organisation.

This is meant to be inspiration and meditation – but also a call to arms.

What is the story of Trespasser so far?

Trespasser started as a one-person band after my old band went silently into the grave in 2017. It might sound cynical, but at the time I was tired of playing with others and having to compromise with my visions around everything from songwriting to imagery to bandnames. I also wanted to evolve from the d-beat based punk I had been playing for 15 years.

I’ve had the idea to create blast-beat based metal with an anarchist theme for a long time, but I had no idea there was already a genre called RABM. So when I started writing songs I felt like a pioneer, which I of course was not.

I realized very quickly that a top notch vocalist would be key in realizing my vision and my own voice just wouldn’t cut it. I turned to Dräparn because of his outer worldly and hysterically brutal voice, which I had experienced on the rare occasions he unleashed it, as a joint vocalist in his previous bands. Thankfully he accepted – without him and his awe-inspiring voice this record wouldn’t have been half the vicious and crushing adrenaline-rush it is.

Do you think you benefit from your punk background/upbringing?

Without the punk scene I would be a totally different person. I have great love for the punk scene. My political schooling comes from punk bands rather than literature and the DIY-anarcho-feminist ethos that, in big parts, permeate the punk community is deeply rooted in me as an ideal. When I started Trespasser I felt that I had to distance myself a bit though. Mostly because I felt I was stuck, music-wise, and had been stuck for a long time. I mean, punk musicians mostly aren’t that interested in development. There’s lots of interesting bands out there, don’t get me wrong, but when you love neck-breaking blast beats and guitar masturbation like I do, there just isn’t that many punks that do that.

Since I came from the punk environment I was nowhere near proficient enough to execute the kind of music I wanted to create on neither guitar, drums or bass. Writing the lyrics and the songs came out of the pure exhilaration I felt after I decided to go my own way and found a music-lyric theme that worked. Learning how to play the instruments was the hard part. I sat in the practice room for several hours, several days a week for a long time just trying to get the hang of the double bass drums, the blast beats and the totally different way to play fills when it comes to metal rather than punk.

What do you hope to accomplish with Trespasser?

Revolution! I still believe that music is a powerful channel for propaganda. And Trespassers anarchist message is not just an image. It draws deep from my own conviction. Hopefully I can inspire someone to discover anarchism that wouldn’t pick up an Operation record or read Kropotkin.

The whole idea was to combine the political ideal of the punk scene with the musical know how of the metal scene. To create a project I myself longed to hear. Left wing extreme metal. I’ve come to learn there’s a whole genre out there doing just that, that lesson is a really cool side effect of this. So yeah, I hope to save some metal heads from right wing indoctrination by bringing them music that walks like Marduk but talks like Crass. And I hope to inspire the punk community to listen to more blast beats, haha.

What about your artwork, where is it from, who made it?

I made all the artwork myself.

When it comes to inspiration for the artwork I really just centered around the russian civil war. Old propaganda posters, archive footage and contemporary artwork. It’s in no way totally historically correct or ideologically coherent – just like normal propaganda, haha.

The goal was to create an epic, grandiose and inspiring imagery that would work with the music and political message. The poster included in the LP, for example, is a photo of actual black army cavalry, but based on a bolshevik propaganda poster and with lines from the “Warszawianka”. So its quite ecclectic in a sense

I tend to like the music of assholes. Dissection, Marduk, Funeral Mist. Murderers, sexists, fascists. Which is a big conflict in my mind coming from the highly politicised punk community. And like I said before, it’s also a reason I started Trespasser. To offer an alternative for punks wanting to listen to metal without supporting shit-heads and for metallers to widen their political horizon.

Apart from that I tend to fall in love with a couple of bands per genre, and that’s it. I rarely swallow a whole genre hook, line and sinker. Many people label Trespasser as black metal, and I can see why cause that’s where I drew a lot of the inspiration from. But I have a real conflicted relationship with the black metal scene. One record in particular must be mentioned in the creation of the first Trespasser LP. When I heard Marduk’s “Frontschwein” something really clicked in me, I listened to that record on repeat for a year or more. I never liked them that much before (other than “Autumnal reaper” and “Sulphur souls”). But with that record… It really spoke to me and I think the influences are so obvious that I could hardly deny the direct inspiration I drew from it.

Dissection’s “Storm of the lights bane” is one of those records I’ve listened to too many times since I discovered it in high school. Especially when writing tremolo-picked-dual-harmony guitar leads this record can’t be denied by anyone as an inspiration.

And honestly I have no idea how to even start explaining my relationship to Nile’s “Black seeds of vengeance”. One of those records I discovered before I even knew what blast-beats were. It totally blew my mind as a 13-year old when it came out and I still hold it as one of those records that I’d totally bring to a deserted island.

What does the future hold for Trespasser, any new music?

I’m constantly writing riffs and lyrics. Everything is a song (to me), as a wise old punk once proclaimed. If “ЧОМУ НЕ ВИЙШЛО?” was a meditation over anarchisms history and heyday next record will look forward. I can tell you as much – less nostalgia and more confident fighting spirit. I don’t want to disclose too much since it’s still in it’s cradle, but the theme will revolve around a post-revolutionary world and the road there. A prolepsis into utopia if you will.

You will probably recognise the sound, but I will never again allow myself to turn stale. My mission is to be more diverse without loosing the relentlessness.

Is there another tour or more shows on the horizon?

We have few things in the works but we definitely want to play more so get in contact with us if you want to do something together! Everything that’s ‘a brewing will be posted on our page on FB, so follow us there or just send an e-mail if you wanna know more!

What inspires you and why did you choose this theme for the album?

Anarchism always was so beautiful to me. I mean, it’s a dreamers ideology when all other ideologies have stopped dreaming. Apart from maybe religious fundamentalism and national socialism. But those are nightmares. And capitalisms dream have already come true, so.. What’s left if you believe in a thriving, equal and just society? Anarchism! Dont get me wrong, lots of anarchiSTS have done, said and written stupid shit through the years (Bakunins anti-semitism, Proudhouns blatant misogyny etc.). And I don’t agree with every self-proclaimed modern anarchist either, it’s a motley movement.

But the primary objective remains. We need to form peasant and worker guerillas and community farms, and that’s where Nestor Makhno had the right idea. Total equality, worker soviets (real ones!), fuck the cheka, kill everyone (that opposes freedom for working people). And if I’m being crass (or an artist) the imagery and aesthetics of the pre-industrial anarchist is just magnificent. The image of black flags against a blood red sky – that was the dream and inspiration of the whole record. See them flying in the wind. Knowing the day has come, and night will never fall again.

I also read somewhere that when Stalin died in -53, the black flag of Nestor Makhnos Black Army was raised in one of the russian political prisons. Almost 30 years after Makhnos death, after facing ruthless repression from Lenin, Stalin, Trotskij – Makhnovists were still faithful to the old revolutionary ideals. Or maybe they just wanted to piss people off. It’s hard to tell with anarchists sometimes.

What should people expect when they see Trespasser live/from the tour?

Total war and a hailstorm of hope, faith and love. The goal is to rally people and inspire organisation. Make people feel – make people laugh and make people cry. And hopefully they take that energy and go down to Rojava and defend the most interesting socialist project in modern time from the invasion of the fascist Erdogan! And if not that at least read or write an article, talk to your peers, go to a demonstration or whatever.

Trespasser is meant to be inspiration and meditation – but also a call to arms!