(Note: This interview first appeared at the No Doves Fly Here site a few months ago.)

The Bay Area’s Alaric have received positive attention on CVLT Nation before; their recent split with Atriarch, reviewed here, was amazing. Members have played in such great bands as Noothgrush, Dead and Gone, and Cross Stitched Eyes. Alaric themselves, however, have a darker, more postpunk approach to music that takes as many sonic cues from bands like Part 1, Killing Joke, or Amebix as it does from any previous projects members have been involved with. The band have been playing a lot of shows with deathrock bands like Fangs on Fur and Altar de Fey. Alaric’s music is a melancholy, downtempo, introspective form of hardened postpunk that marks a new and distinct turn from the sound of members’ bands in the past. They’ve been one of my favorite current projects and I can’t wait to see where they will go next in their sonic evolution.

This is an interview with Shane, Alaric’s singer, and Rick, the bassist. Thanks to Jason Willer, drummer of Alaric and also singer of Cross Stitched Eyes, for help with this interview.

OLIVER: First thing’s first: Who is currently in the band, what instrument do they play, and what notable bands have members been in, in the past?

OLIVER: What does the name Alaric refer to? Who thought of it and what does it mean?

SHANE: Alaric is the name of an old friend of Jason and Rick’s who passed away.

RICK: It refers to a dear friend of ours (Brion Deadboy Alaric) whose lust for life and fascination with death touched our lives. We decided this to be a fitting name due to the fact that our music bears many parallels to his life and death.

OLIVER: Do you all consider yourselves to be a deathrock band? You recently played with Fangs on Fur and I know bands like Part 1 are a big influence on Alaric. How would you describe your music to someone who’d never heard it?

SHANE: I never think in those terms. But if it’s a useful hook or handle I don’t have a problem with it.

RICK: Everything dark is a consideration to us. I describe it as dark, textured, constantly evolving, yet always casting shadows. Inner torment and a glimpse of beauty.

OLIVER: When did you all start?

SHANE: Jason and Rick were playing before I was invited. My first practice with them was October of ’08. Russ was brought in a little later.

OLIVER: What are some of the bigger musical influences on Alaric’s songwriting style?

SHANE: You’d have to ask the musicians in the band about that.

OLIVER: The recent material on the split with Atriarch seems more complex, nuanced, harrowing – is this just the natural progression of the band or is there a conscious decision to make the songs slower and darker?

SHANE: We have a huge backlog of parts, things recorded at practice, etc. We were drawn to finishing these three songs first. I can’t say it was a conscious choice, but it’s been a pretty intense year. These songs are simultaneously more abstract and more specifically personal.

RICK: I believe it was unintentional. This was simply the way the songs needed to be when we wrote them.

OLIVER: Deathcharge recently released their first LP even though the band has been been around since about 1997. From an outsider’s perspective, it similarly seems like the pace of Alaric’s releases is slow. The Spectres from Vancouver, BC, are the same way. Is this due to work schedules, or….?

RICK: In our case it’s due to our commitment, as a band, to only record when we feel it. Exactly as we wish it to be (which takes a great deal of time). We’ve disregarded the same amount of material as we’ve released — simply because we were not satisfied. There is also the burden of finance involved with recording.

OLIVER: What’s the best show Alaric has played, who was it with, and what happened?

SHANE:  Might have been a private concert for just us. Our song “Weep,” lyrics and all, was created, and came out the way it is on the recording. I like playing bars and stuff, too, though.

RICK: The last one was the only show I can remember clearly, it was nice.

OLIVER: Why do you think the West Coast and Pacific Northwest especially is cranking out so many dark postpunk style bands right now…?

RICK: Not sure. I agree that there is a resurgence of interest in dark punk, deathrock, and no-wave that seema to all but disappear for a number of years. I couldn’t say why. Maybe the rain?????

OLIVER: What are the upcoming plans for Alaric? Any tours? Will there be a national tour any time soon….?

SHANE: We’re going to do a short thing with Atriarch out here to celebrate our split LP. I’d love to do some more if it is survivable.

RICK: April – northwestern tour with Atriarch. After that — ????

OLIVER: Are any band members besides Jason that deathrock DJs in their spare time?

SHANE: Russ does the No Other Radio network which is not deathrock. It’s a long-running experimental recordings radio show. Show page with a link to archives can be found here: http://www.kpfa.org/nootherradionetwork/

OLIVER: Where can folks go to buy, check out, etc., your material. Thanks for your time, guys. Hope to hear more from you in the future! 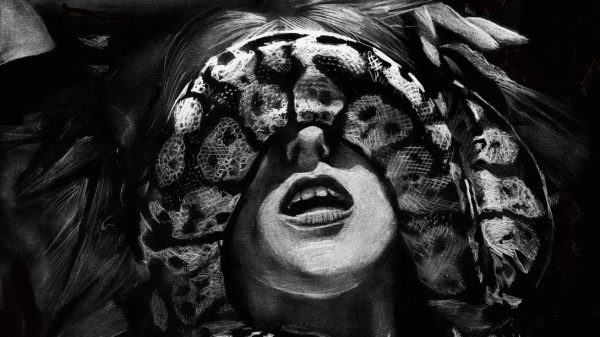 Golden Era Deathrock is more alive than ever: Altar De Fey’s ‘And May Love Conquer All’