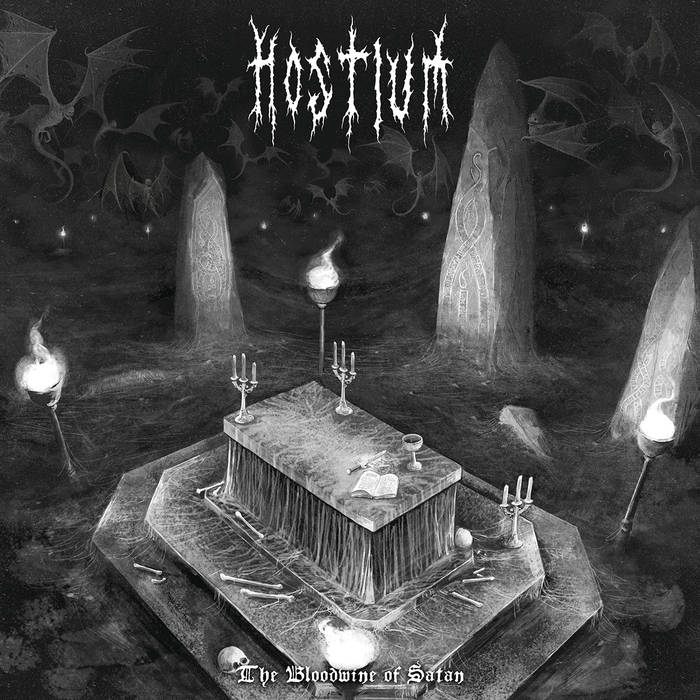 I’m sure plenty of you have heard the saying, “something wicked this way comes.” Well, after the intro sermon on Hostium’s The Bloodwine of Satan LP, you might just echo that sentiment. Iron Bonehead Productions is as reliable as labels come, and in this new holocaustic metal offering, Hostium bring the underground some much-needed cardio-pulmonary resuscitation.

Perhaps that’s an exaggeration. The underground is flourishing. Commercial bands are holding on to their fat recording contracts via major labels that just want to cash in. Unfortunately, music is also a business, and everyone knows art suffers under the intent to commercialize. Hostium needn’t do any of it for validation. The Bloodwine of Satan is ritual worship. Sacred music for Satan, so to speak. Whatever your beliefs are, Hostium play music that underground metallers will relish, even just for a while.

It is metal done well. A genre-bender, more like. The Bloodwine of Satan has hints of black metal and old-school heavy metal in a mish-mashed first wave-inspired salvo of pristine music. Calling them one lousy identifier won’t suffice. File this under ‘good.’ The music sustains interest. There are catchy sections, blast sections and galloping transitions. It may not make the Cvlt Nation end of year lists, but this CD/LP is of worthy note to intelligent metallers who don’t give a damn about bands on large tour busses selling out entire stadiums. So, bring on the ritual! It’s ritual, but not quite in the way that describes music even slower than Monarch’s Sabbracadaver. In fact, the music is mostly uptempo. The Bloodwine of Satan is a legit full-length album, comprised of eight tracks ranging from four to six minutes. Leaving genre tags aside, the music is unique. It reminds me of Varathron’s His Majesty At The Swamp classic, merging influences seamlessly in a display of commendable aesthetics.

The drums are lively on the album. Listeners can hear the fill-ins, the blastbeats. Worth noting is that drummer, Luzifaust, experiments with some interesting drum patterns at times. The guitar riffs sound like they’re behind the mix somewhat, but the production values still lend a convincing charm. Like a warrior adept at the use of his weapon, the instrumentation here suggests at competent musicians who love their dark art. The Bloodwine of Satan does nothing noticeably less-than-stellar.

The songs mix well from first to last. The album as a whole feels organic, quite unlike albums of bands that use drum machines and ambient keyboard touches. Most impressive for me is vocalist Necrovermin’s strangled vocal roars.

The members of Hostium hail from Vancouver, Canada, and also play in another band called Nordwind. Their The Bloodwine of Satan LP comes after the release of their first EP, Pissing Incest on the Virginborn, which came and went eight years ago. Support this worthy effort if you’ve ever loved anything from Iron Bonehead Productions. Let’s hope we haven’t heard the last of Hostium just yet.

In this article:BLACK METAL, Hostium, Iron Bonehead Productions, review, The Bloodwine of Satan