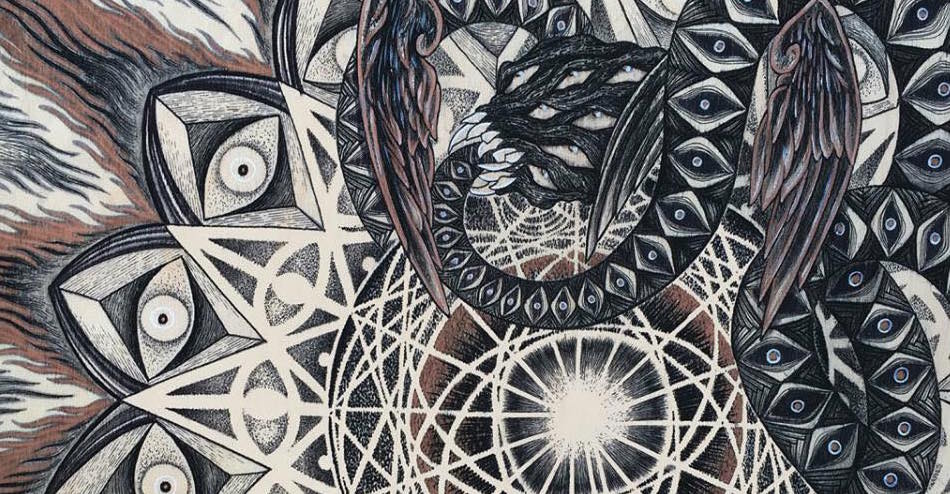 I’m not gonna lie on this one, people. To say that I could have cared less about Abigail Williams up until last week would have been a vast understatement. My knowledge of them is at best, limited, and perhaps at most, slightly jaded and elitist. A fact that I am trying to temper with age and a new found ability to try and hear new things. Which brings us to their newest album, The Accuser, released courtesy  of Candlelight Records. A band like Abigail Williams – meaning one that has had a revolving door of members since their inception, as well as a chameleon-esque ability to change styles – can be polarizing, to say the least. I’m not going to sit here and trash their previous records or styles, because, well, those albums led up to this whirl-wind of sonic depravity. All those break ups, the moving between different cities, the constant refining of their sound, has resulted in an album that is sure to stand shoulder to shoulder – perhaps even topple a few over – with the newest crop of North American Black Metal bands that have been pushing boundaries over the last few years. To say that Abigail Williams have crafted their finest offering would be an understatement. The Accuser stands on it’s own two, track-mark bruised legs and delivers what will assuredly be noted as their finest album to date.

First off, Ken Sorceron, the staple figure behind Abigail Williams, should be patted on the back for actually pushing through all the bullshit that this band has been plagued with. Not many people can keep a project like this afloat for so long, let alone pull off an album this grand so far into their career. As I mentioned before, this band really never had any place in my life before this album. So as a result of this review, I was forced to get a crash course in their previous albums, particularly the 2012 album entitled Becoming. If Sorceron and his fellow necromancers were looking to up their game and really make people take notice of them, then they succeeded in leaps and bounds with this newest release.  The Accuser, as a whole, sees this band shedding their skin yet again, revealing a deceptively complex and even darker release than anything in their back catalog. Within the first minute of “Path of Broken Glass,” the opening track, it was apparent that I was going to have to reevaluate any expectations I had for this; a fact that left me realizing that the best way to digest this was to just jump into the deep end of The Accuser and pray that I don’t end up drowning within it’s bleak, oppressive sound. As the album progresses, it rapidly reveals multi-facets and jagged edges to Abigail Williams assault. Particularly the emotionally charged fourth track, “Will, Wish and Desire,” a song that floored me with its initial explosion, and was my go-to song when digesting this beast. It’s a fantastic piece of metal, one that goes above and beyond any of the other songs, which says something about this album’s actual depth and content. Even further in, Abigail Williams show strong nods to the second wave of Black Metal. Especially with the fifth and sixth track, which showcase a tasteful ode to the forefathers of this now infamous – and over populated – genre. “Godhead” in particular has such a classic In the Nightside Eclipse feel to it that it was hard for me not imagine an ancient, cobweb-encrusted monastery cloaked in the darkness of night while listening to the song. It should also be noted that drummer Charlie Fell absolutely destroys this song, with some jaw-dropping double bass and blast beats behind the drum kit. Each song on this album has its own individual stand out moments; when listened to in its entirety, each individual track meshes extremely well together. Top-notch musicianship and song structure add a heavy emotional depth and atmosphere that is often lacking these days in extreme music, specifically in Black Metal.

If one is looking for easy comparisons as to what this new line-up and era of Abigail Williams have conjured into this world, The Accuser seems to take heavily from Nachtmystium and the aforementioned second wave of Black Metal, with injections of perhaps even Ash Borer’s cold distant take on the genre. When looking at the current line up, which features members who have played with Cobalt, Wolvenhammer, Krieg and Abysmal Dawn, the particular name dropping of Nachtmystium makes total sense, as both Jeff Wilson and Charlie Fell served time alongside the now infamous Blake Judd, before the world turned against him and his music. So it makes total sense that they’ve joined forces alongside Sorceron to carve out this new era and inject their previous influences into Abigail Williams; resulting in this album sounding incredibly mature and yet a mutated hybrid of each member’s previous projects and playing style.  All five individuals pull their own weight, from what I can tell, accompanied by years of experience in various bands that have worked within different sounds; culminating in these animals forging ahead together under a well known moniker. The end result, of course, being this dense slab of music that exudes a dark charm and devilish character the more one listens to it.

At the end of the day, it’s safe to say that Ken Sorceron and his new compatriots have achieved the vision they were going for when they united under the banner of Abigail Williams. The days of metal-core breakdowns and dark tributes to symphonic Black Metal are gone. The Accuser sounds like a totally different project, one that has been forged and tempered in isolation and suffocating despair. While admittingly, it does borrow a bit from the sound of more bench-marked projects, it still has the balls and chops to stand up alongside other projects within the extreme metal scene, particularly the always “tolerant and open-minded” American and European Black Metal scene. And while I can already hear the rabid cries of the “Trve Kvlt” demographic denouncing this release, I offer this one piece of advice to you all: Shut the fuck up and give this album a spin. It delivers on all fronts and reeks of immense potential for future releases, if this line up can stick together for another record. Trust me on this one. Because when I sit down for dinner every night, I butter my bread with only the most malicious Black Metal I can unearth. The Accuser and more importantly, Abigail Williams have proven to be a legitimate threat to all extreme metal acts. And for that newly discovered fact on my part, I thank them from the bottom of my hollowed-out heart. In this article:abigail williams, BLACK METAL, Candlight Records, The Accuser