Rome recently released an official video for the song “Silver Coil” from their new LP, Hell Money. Most folks know that Rome is essentially comprised of one man, Jerome Reuter, and that the band’s name is actually a shortened version or nickname derived from his own first name. Along with Of the Wand and the Moon, Rome are one of the larger contemporary neofolk acts without roots in the original 80s apocalyptic folk scene. Their incredible 2009 Flowers from Exile LP brought them to the attention of audiences outside the narrow confines of the neofolk and martial scenes, leading to a following among goth, postpunk, and other crowds. (In fact, Rome began as a postpunk band.) Jerome Reuter’s expressive and mournful baritone voice is one of the trademark appeals of the band — their secret weapon, if you will — and the band’s take on Rose Clouds of Holocaust-era Death in June type neofolk continues to find new fans to this day.

I’ve wanted to interview Jerome Reuter for quite some time, especially since LPs like Masse Mensch Material grabbed my attention and refused to let go. By the time Flowers from Exile came out, I was fairly obsessed. The new LP, Hell Money, is a slightly more personal, confessional, and stripped down affair compared to the bombastic tours de force one could find in their last few LPs.

Jerome Reuter was interviewed by Oliver in February, 2013.

Oliver: The latest LP is called “Hell Money.” Can you tell readers what gave you the idea for the name of the LP — what the name means? Is there a unifying theme throughout the LP the way there seemed to be, for example, for the “Flowers from Exile” LP?

Jerome Reuter: I don’t want to dissect that title, to be honest, partially because this time around there was no specific concept or theme to the album or its lyrics.

Oliver: Many of your fans probably know that before Rome, you sang for the postpunk band Mack Murphy and the Inmates. I know one of those songs, “Lately,” laid the groundwork for the “Querkraft” track. What is it that happened that made you want to change your direction away from that kind of dark postpunk sound and into a more explicitly neofolk sound as found in Rome? Did you hear any certain bands that influenced you before the change, or was it something more personal?

Jerome Reuter: After several recordings Mack Murphy and the Inmates just ceased all activities mostly due to personal reasons. You know, most people in that band had their own life going on in different countries and no one really wanted or could make the sacrifices necessary to make it as a band. It’s a jungle out there, so you really have to live for your work/art if you want to succeed in any sort of way. And we wouldn’t have made it very far, I’m afraid. It was a good band. And we were all close friends before and after it. Most of them are part of the live crew I have with ROME now. It just wasn’t the right time for us back then. So I started ROME after that, just because I was in the mood to do that type of thing. You know, things have a way of growing and people have a way of changing over the years. So for me it was just about combining what I did in MM&TI and other bands I was in, with the more obscure and experimental music genres I was into. I wrote all the songs for Mack Murphy and the Inmates and some of them were still very important to me, so I incorporated them into the world of ROME also.

Oliver: What bands besides Mack Murphy and the Inmates were you in before Rome? I think I read an interview in which you stated that you were in some punk, and maybe even some metal, bands before Rome? What bands were they and are there any releases that completist Jerome Reuter fans can check out?

Jerome Reuter: Yes, I started out in a black metal band when I was twelve. This was in the early nineties when black metal was still quite a vibrant and somewhat new thing. After that I played mostly in Punk bands. I was the drummer, then bass player, then singer and so on… I settled with the guitar and vocals at some point because I was tired of telling other people how to sing my songs, haha. There’s a lot of releases out there. There’s things I don’t even remember. I’ve recorded at least one album every year, ever since I was 16…so there’s some more stuff out there, but I’m not sure I’m proud of each and every one of them, I’m afraid.

Oliver: Your LPs always seem to be a mix of historical references and personal experience, and they are usually (to my mind) about loss, unrequited love, or otherwise about people who feel a connection across vast distances but are painfully separated. The new LP seems intensely personal and without the historical references that were present on, say, an album like “Masse Mensch Material.” Would you agree? Was there a different approach you wanted to try on the new album to separate it from your past efforts?

Jerome Reuter: Yes, I agree. There was a different approach this time around, indeed. I was actually working on the album that will probably be released this year but then I felt like I was repeating myself too much. After the trilogy was completed, I just kept on going, but I soon discovered that it all felt too much like the same stuff again. It wasn’t bad, but I wasn’t really convinced, so I just stopped. And then at some point, like a home invasion of some sort, there were these new types of songs emerging, out of some weird turn of the stomach. And I just let it flow. I wrote that record in 7 days and felt much better after that, haha. I had puked my guts out, so to speak. There’s a lot of personal stuff on there. A lot of stuff that had no place on a ROME record before. Now I’ve been back on the “new” record again, and it feels good too, so I’m pretty confident that I’m gonna finish that this year.

Oliver: What bands would you say have had the greatest influence on you? Folks would probably think Death in June and Current 93. On Flowers from Exile I could hear a kind of gothy, Sisters of Mercy-esque influence. (But maybe that was just me!) What influences on yourself do you think would surprise most fans of Rome?

Jerome Reuter: Among many others, Death in June was certainly both influential and inspirational, yes. I don’t believe that comes as much of a surprise to anyone familiar with the genre. Obviously I am still very much influenced by songwriters like Johnny Cash, Nick Cave, Leonard Cohen and Jacques Brel and some others. I am actually often influenced by books and movies. I like Werner Herzog’s films and Alejandro Jodorowsky and that sort of stuff, but I don’t know if that is surprising to any of the supporters either. When it comes to my morale – especially regarding my work and my life as an artist- I guess I should drop these names here: Helge Schneider, Captain Beefheart and Karl Valentin.

Oliver: A related question, and one I like to ask bands: If you were stranded on a desert island with a working record player, and could only bring 5 LPs with you for the rest of your life, what 5 LPs would those be?

Jerome Reuter: It’s tough to be really certain about this, but I guess I’d go for:

Oliver: I was a big proponent of the “Rome Living Room Tour 2012” for the USA. I don’t know if any living rooms were actually played (were they?) but you did tour the west coast and, if memory serves a city or two on the east coast of the US. What was that experience like, overall? How were American crowds compared to European audiences? Will you play the USA again any time soon?

Jerome Reuter: Yes, we played some living-room shows both in Europe and the US, but we were not able to do a longer tour out of it, because the distances were just too big. The US-tour was amazing, really. We can’t thank Merrick Testerman (of Aural Apocalypse) enough for making it all happen! I sure hope we can come back soon! The crowds were great and different in every city, just like in Europe, basically, where we also don’t have the same kind of audience all the time.

Oliver: A favorite song of mine is “Das Feuerordal” off Masse Mensch Material. Great lyrics, vocals, instrumentation, and everything. Can you say what inspired this song? Was it a particular person, or relationship, or maybe it was something more historical, like your songs in Flowers from Exile?

Oliver: Do you actually consider yourself to be a neofolk artist? Some other groups, like Of the Wand and the Moon, seem to be exploring psychedelic sounds. Rome has maintained a kind of experimental ambient angle in a lot of tracks, especially on Hell Money and Die Aesthetik… Do you see Rome going in any particular direction with the next LP or with any material you’re working on now? Can you give us a hint what that may be?

Jerome Reuter: I can’t really say until I am done with the work… I originated in the genre of neofolk but I’ve never liked being associated with it too much and I’ve always combined that style with other genres…so in a way I don’t give a toss about genres and expectations. I just do whatever I want to do, whatever I like. Just like my friend Kim from OTWATM. So, yes, I’m constantly exploring new terrain, but I am also always going back to some of the roots. Hell Money was all new to me. I feel like the next one is going a bit more towards a place that reminds me of Masse Mensch Material. It’s just how it happens. You never know where the song or theme is gonna take you.

Oliver: How many languages do you speak? I’ve seen song titles in German, English, and French. Masse Mensch Material seemed to be a very German LP, while Nos Chants Perdus had a very “chanson” French feel. Was this intentional, and what does this represent?

Jerome Reuter: I’m fluent in French, German, Luxembourgish (yes, that’s a language!) and English. I understand Spanish and Italian somewhat, but can’t really speak it. That’s it. And I probably can order wine in most others, haha.

Oliver: Thanks for your time, Jerome.

Jerome Reuter: Thank you for the interview! All the best. 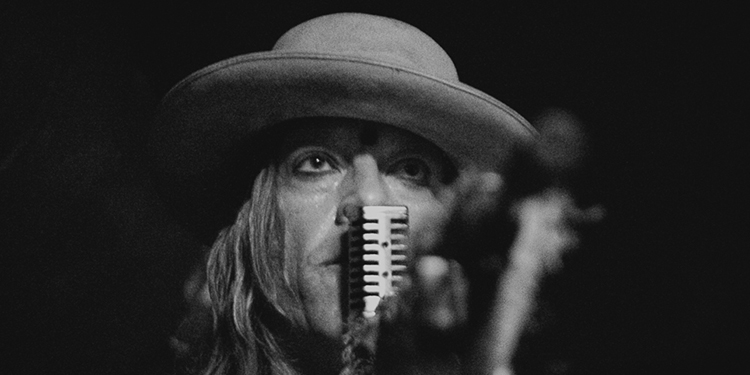 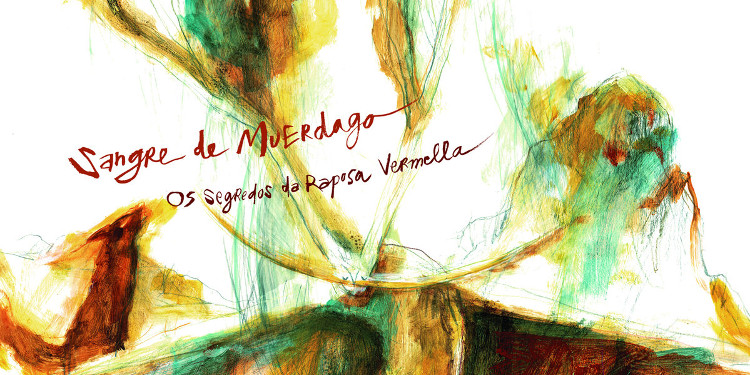 Greetings – we just wanted to inform you that today’s most entrancing folk ensemble – Sangre De Muerdago – have just released a brand new...

Down in June vs Death in Rome

Death in June are a band who have been dogged by controversy, but the influence of their music and aesthetic on the underground is undeniable....