The late Kenn Kroosaficks accorded the 2011 self-titled Bellicose Minds EP one of “the top positive punk/deathrock” releases of 2011, here on CVLT Nation. Although Kenn passed away in February of this year — at the premature age of 20 — his taste in music was (and is) spot on. Portland’s Bellicose Minds have announced a new LP, The Spine, due out soon. This interview is dedicated to Kenn.

Bellicose Minds are one of the best dark postpunk bands around today.

Interview conducted by Oliver in August 2012.

FROM NICK BELLICOSE: Disclaimer: Nick Bellicose will be answering the entire interview, the others in the band lay mute on all subjects concerning the band, its activites, and ideas. DIE.

Oliver: So, first thing’s first – when did Bellicose Minds start? Also, who is currently in the band and what instruments do they play?

Nick: The idea of the band started in 2008, as a form of experimentation and a feeling of boredom with what was going on at the time. We chose the name and had a solid line up in the spring/summer of 2009. It consisted of Me (Nick) AJ (Drums), and Suzy (Bass). In the winter of 2009/2010 we brought our friend Keith (Bog People) in to play synth and guitar for us. He was an amazing addition to our sound and stayed with the band until early 2012, when he left due to time restrictions. The current line up is Me (Nick) AJ (Drums), and Mira (Bass). We are all very happy with each other and we’re enjoying the music. Which is the best you can wish for.

Oliver: Who came up with the name “Bellicose Minds” and what is it supposed to mean? In other words, is there any particular story behind the name?

Nick Bellicose: Finding band names is hard with so many good, obvious ones taken. You can either spam the button on the name generator web site or draw words from a hat. We didn’t want that. It feels heartless and cheesy. We really wanted a name that had a meaning, and said something about the band. There were some ideas thrown around, but I ended up coming up with The Bellicose Minds. The rest of the band liked it. It reflects our attitudes towards life and society, to be in a state of agression and warfare. Non-complacent, driving forward through the sea of shit we live in.

Oliver: I really like the vocals – they have a classic sound but also don’t really sound like many vocals you actually ever hear bands having any more these days. They remind me a little of Vex (the UK postpunk band) or later-era The Dark after they got gothier (“Shattered Glass”). Are those conscious influences on your vocals’ sound, or the band’s sound as a whole? If not, what is?

Nick: It’s easiest for me to sing in a lower register. I always liked the way Jim Morrisson and David Bowie sang when I was a kid. That was music I heard from my parents as a very young child. I started finding my own music to listen to at the age of 9 or 10, and always looked for extremes. I love extremes. I listen to a lot of hardcore punk and anarcho-punk from the late 70’s and 80’s. I draw from the aggression and provocation in many of the lyrics from those styles of music. Darker punk/post punk bands definitely have a big influence on how I forge the lyrics and sound in our songs. Singers such as Mark Burgess, Adrian Borland (RIP), and Mic Jowger (Pink Turns Blue) are huge influences because they all had their own style, and felt their words. At the end of the day I always try to come up with my own style and ideas — my own voice. Influences are important, yet it’s important to respect them for what they are and not become a rip off.

Oliver: More about influences — if someone had never heard your music before, what sort of band would you tell them you are were? Postpunk, “dark punk,” goth-punk, etc.? A lot of bands shy away from self-labeling, but in any case how would you describe your sound to others?

Nick: Postpunk. It fits in terms of genre and it fits literally. When people press harder on the subject I usually tell them to just listen to some of our stuff.

Oliver: What are band members’ personal favorite bands? A question I recently like to ask is if you had to take 3 and only 3 LPs with you to a desert island, to live out the rest of your days with, what 3 LPs would it be?

Nick: None. We’d all be too pissed off to want music. We’d sit in silence and wait to die because desert islands suck!

Oliver: I understand you’re currently working on the Bellicose Minds LP. What is it going to be called, and how many songs are on it? Also, is the style similar to what you’ve been playing so far or are there different things in the mix? (Is Stan Wright producing it?)

Nick: Yes, our LP is in production. It’s recorded and off to pressing in September. The title is “The Spine” and it features 11 songs. The human spine is complex, fragile, and extremley powerful. It connects our body and minds and allows us to generate great good or evil. It was a fun theme to work around. The style is similar to what you would expect from us, but more mature. Stan (of Arctic Flowers) and I are producing the record together, and Blackwater Records is doing our US release. A European release on Sabotage records (GER) is planned as well.

Oliver: Gotta ask you about the lyrics of “Tension Building,” which I love: “A nation of big, fat lazy idiots / That don’t know how to read / And only know how to breed.” Is this a song about the Idiocracy-ization of the US, or….?

Nick: Yes, it totally is. It’s a frustrated exclamation against the “NERF” society we live in. I won’t write an essay about my whole theory on the “NERF” society complex, but I’m sure you can kind of stitch a idea together of what it means from the song.

Oliver: I’ve asked this of some other bands from the Pacific Northwest about the sound that now seems to be coming from a lot of bands there, which is very much a deathrock-tinged, peace punk/postpunk/darkwave hybrid – Deathcharge, Spectres, Dead Cult, The Now Dead, The Estranged, etc. I know bands elsewhere, in other cities, are doing this, too, — but it seems a lot of the bands making this style of music now — which I count myself as a fan of, by the way — are concentrated in the San Fran to Vancouver, BC, Pacific northwest corridor. Do you have any idea why this might be happening in the past 5 or so years, the development towards this style by a lot of punk bands….?

Nick: I’ve wondered that myself, too. An important thing to realize is that all these bands evolved within the DIY punk/hardcore scene in the northwest. It was a long evolution that reaches back years. Deathcharge, the Spectres, and the Estranged were playing like that years ago.

Deathcharge started in 1997, The Spectres have been going since 2005, and the Estranged since 2004. It was so refreshing to have bands like them on bills. It broke the stagnation which d-beat became in the mid 2000’s. It was like a thunderstorm that broke a hot, humid, overcast decade. In addition to that, the climate in the northwest can invoke dark thoughts. Six to seven months of rain and clouds drive some people away from the region, yet it inspires others to write dark music. If you connect the two ideas it makes sense, but a third factor to add in is the fact that many of the members of these bands always liked dark music alongside hardcore/punk and metal, anyway. So the passion for it was always there to begin with.

Oliver: Are the songs on the upcoming LP going to be sort of socially-observant songs like “Bloody Hands” or “Tension Building,” or will they be more personal — or will they be a mix of both? Is there a primary lyrics writer, and what are the main topics or subjects that compel you to write?

Nick: There will be a mix; the personal and socio-politcal will both be there. I write all the lyrics for the band. The others let me have my way with that entirely. The state of things around us are what bring me inspiration to write lyrics. If you look around you or even scrape the surface of current events and have a good lyrical imagination you shouldn’t have a hard time writing notebooks of material that’s scathing and truly grimm.

Oliver: What are some of your favorite bands out there nowadays that are currently going?

Oliver: Will you all be touring or playing out any time? Coming to Texas any time soon?

Nick: Fall 2012 is looking good for us in terms of getting out and playing some really cool shows. We are playing DISTORT VANCOUVER FEST in late September, A VARNING IN MONTREAL in early November, followed with a West Coast tour with BELGRADO right after Varning. If you live in Montreal or on the west coast, keep your eyes open for us this Fall — we will be playing somewhere near you. We are not playing Texas anytime soon, but would really love to come there and do some gigs as soon as possible. Thanks for the interview Oliver, and thanks for your patience with us on getting it to you. Flakey punks is flakey. 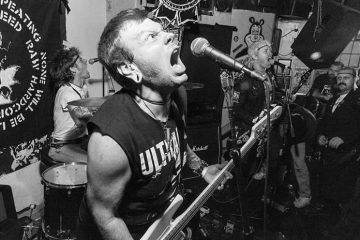