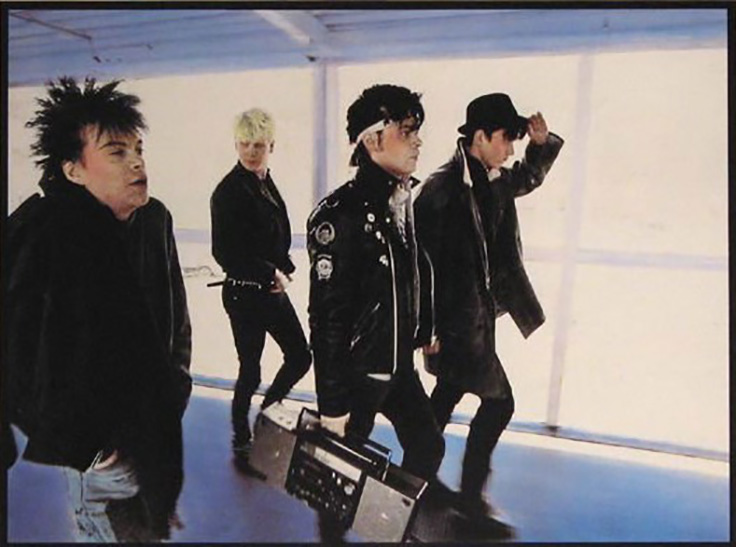 In this contemporary, content-rich world of music and the internet, significant advances can slip through our cracks and one of those for me was not realizing the pioneering Finnish post-punk band Musta Paraati had not only reunited, playing several European fests, but were releasing a brand new album with Cleopatra Records on October 19. If you’re like me and only know a handful of Finnish words from memorizing translations of hardcore lyrics, you might not have realized their name translates to ‘Black Parade’ in English and that’s exactly what they’ve titled their new LP, which is already available for preorder. Clocking in at a bit over 45 minutes, it’s a key turning point in their musicality in several different ways. For starters, all the songs are in English, an obvious departure from early days. Secondly, recording technology has simply improved since the 80s tenfold and the production level on these tracks is able to display the lushness achievable now, even with similar material to 40 years ago. The songs have an air of maturity that you’d expect from veterans and the compositions are well thought out, every instrument taking up its righteous space while retaining its individuality. Keeping in tow with their previous releases, their lyrics span the gamut of what I now call “the darks” – themes about all things spooky goth, to Nietzschean self-empowerment, to general disdain for the socio-political climate. Most interesting in the mix is a self-cover of their 1983 track “Johtaja” , now translated into English as “The Leader” which they’ve made this amazing new music video for:

We even had a chance to interview them about the past and future of the project:

What compelled Musta Paraati to officially reunite in 2015?

MP: The time and position of the planets were right. Our original keyboard player had a birthday party in autumn of 2014 and we put the band together with Ylppö for one gig. Things started to develop faster than we expected. Suddenly we were playing at all the major festivals in summer 2015 and in autumn of 2015 we started to make new material. Was the resurgence of interest in post/goth punk surprising to you or did you think Musta Paraati was lost to history?

MP: We knew that there was a strong cult following in the post/goth punk scene. The 2001 Peilitalossa re-release with 23 songs was really important as all our recordings were sold out back in the 80’s. For the sold out release gig in Tavastia in March 2001, Saku collected a special band with hardcore Musta Paraati fans like Ville Valo, Ylppö and Gas Lipstic, just to name a few. The same line up played the Ankka Rock festival in the summer of 2001.

The first incarnation of the band was short-lived but has since made quite an impact. Did you feel at the time that your music was unique or underrated?

MP: It must have been unique as we have a very strong and passionate following. In 1983, we were the highest selling rock band in Finland. How do you feel Black Parade compares to the early material?

MP: We did not want to make Peilitalossa 2. It is 2018, not 1983.  We started to make new songs in autumn of 2015. When Jyrki joined, we let him choose the songs he loved. What ever songs we play together, it just sounds like Musta Paraati in one way or another.

Singing songs in English is new for Musta Paraati, how does it feel departing from such a separate language like Finnish?

MP: We wanted to do this album in English and Jyrki69 lyrics captured the right mood instantly.

Do you have any plans to tour the Western Hemisphere?

MP: Of course – the sooner the better.