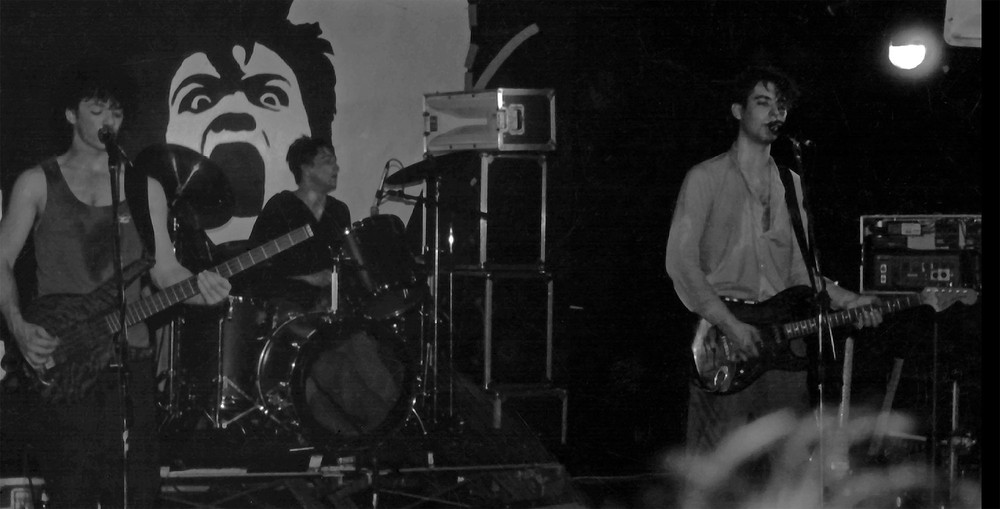 When I was a moody teen in junior high, I sent off for the Projekt Records catalogs quite frequently (paper catalogs through the mail, mind you!) – and it was in the pages of those that I first read about unheard-of genres with lush, evocative, and appealing titles like “darkwave,” “dream pop,” and “ethereal wave.” (It’s also there that I encountered band names like Black Tape for a Blue Girl, Lycia, Attrition, and more.)

Fast forward to 2016 and these genre tags are thrown around with careless abandon; much like the term “goth” – or maybe even “punk” itself at this point – titles like “minimal” and “darkwave” seem like throwaway, garbage basket terms. When it comes to actual darkwave, though, Berlin’s Pink Turns Blue are rightly regarded as one of the founding acts. Unfortunately, obsessive over-categorization runs the risk of pigeonholing bands unfairly, and it’s more than clear that Berlin’s Pink Turns Blue, from their earliest 80s material on up to the present, have also been one of the finer exemplars of continental postpunk, period – whatever subgenre some music journalists want to relegate them to. I was granted the pleasure of chatting with Pink Turns Blue vocalist Mic Jogwer recently about the band’s new LP, The AERDT – Untold Stories, on Germany’s Orden Records, released in April of this year.

As with a lot of bands from the 80s era of darkwave and postpunk, Pink Turns Blue wear their punk influences on their sleeve: Indeed, although the band’s audience demographic is comprised nowadays mostly of goths, the band’s name actually comes from Hüsker Dü. (“In 1985 we were big fans of Hüsker Dü,” Mic says, below, adding that the band strives for a “punk attitude, but with melody and emotional depth.”) The introspective and experimental nature of Hüsker Dü informed Pink Turns Blue’s approach to music in a Berlin that, at that time – the mid-1980s – was a focal point of the icy and apocalyptic Cold War zeitgeist that had attracted David Bowie, Iggy Pop, and even Killing Joke (viz. Killing Joke’s chiliastic 1982 Revelations LP) to record some of their darkest material in Germany’s troubled and divided capital. Germany’s Fulda Gap was going to be ground zero in humanity’s final holocaust in World War III, and time was running out. Pink Turns Blue were making desperate and dark recordings in Berlin for the moment; time itself might end at any second in the looming conflagration. The result was their first LP, the seminal “If Two Worlds Kiss.” (A great snapshot of this particularly German musical milieu is also captured in the excellent 3 volume Godfathers of German Gothic CD series.) Enter Pink Turns Blue’s new LP, The AERDT – The Untold Stories, and none of the apocalyptic romanticism has subsided. The atmosphere throughout the ten song disc is tragic and forlorn, with beats that seductively cajole one into a kind of dreamy dance mood. Thirty years of post-Cold War “progress” has seen the world devolve into a surveillance state of gross economic inequality, where pockets of the economic “third world at home” (to borrow a phrase from Noam Chomsky) have been growing within the world’s only remaining superpower and across Europe’s economic landscape as well.

Pink Turns Blue, as always, make music for the shadowy corners of the psyche, playing upon an inner sense of despair and doubt. Pink Turns Blue are a band, after all, that still proclaimed, in 1993, even after the fall of their hometown’s Berlin Wall, that we were all still a part of the “Dead Generation”:

The AERDT – The Untold Stories starts strong with the track “Something Deep Inside,” an eminently danceable number with a strong bassline delivered powerfully via Reubi and the trademark impassioned pleas of Mic. The songs for the most part stick to Pink Turns Blue’s trademark dark and thumping sound that can put one in the mind of the Sisters of Mercy’s clean, gloomy, and bass-heavy tracks on Floodland, as well as stuff off earlier efforts by The Sound. In fact, the fourth track on Pink Turns Blue’s newest LP, “The Clown,” is the most classically postpunk track on here; it sounds like it could have come from The Sound’s seminal “Jeopardy” LP. “NYC Breakdown” has a stompy vibe that is somewhere between The Fall or the Blue Orchids and The Birthday Party. For the most part, the entire LP is a collection of well made postpunk dance numbers that never abates save for the poignant and sentimental “Tomorrow Never Comes,” easily the most ballad-like composition on the LP. Pink Turns Blue was interviewed by Oliver Sheppard in June, 2016.

Mic, you’ve come out with a new LP, “The AERDT – Untold Stories.” What will this LP sound like, and what direction are you taking with it compared to past Pink Turns Blue efforts? What does “Aerdt” refer to?

Mic Jogwer: AERDT stands for ART and EARTH. Beauty and real life emotions. What did we try to achieve? The same intensity and atmosphere that stand for PINK TURNS BLUE but without sounding retro, or dusty, or just caught in an era. Ideally we would have created a new version of post-punk. Punk attitude, but with melody and emotional depth.

For folks that may be encountering you for the first time, can you explain when and where you started, and who was in the original lineup of Pink Turns Blue versus who is in the band’s lineup now, for the new album?

The band was founded in Cologne, Germany in 1985 by Tom Elbern (guitars), Marcus Giltjes (drums) and myself, Mic Jogwer (vocals and bass). Before the release of our first album, “If Two Worlds Kiss,” Tom left the band and our then keyboarder Ruebi Walter had to pick up the bass and I had to play the guitar. For many years we played as a threepiece with Ruebi playing most of the songs on bass and some keyboards. Today we are again a threepiece with myself (Mic Jogwer – vocals and guitars), Ruebi Walter (bass or keyboards) and Paul Richter (drums). Drummers are changing quite often. Sometimes we have an extra keyboard player, if available. It’s not essential, but it’s nice. Who came up with the name “Pink Turns Blue” and what does it mean?

In 1985 we were big fans of Hüsker Dü. One of our favorite songs on their album Zen Arcade was called “Pink Turns To Blue.” a song about a girlfriend that died on drugs.

You’re one of the more important acts in what would come to be called “darkwave” by the 1990s. Is this a genre label the band accepts, and was exploring gothic or dark sonic and aesthetic territory an important focus for the band early on?

Our second album, “Meta” was heavily influenced by LAIBACH. We went on tour with them several times, and loved their music and their producer; Janez Krizaj helped with the recording of three of our albums. We discovered samplers and very slow songs and drum machines. But now we’re back to the good old band again. Who designed the cover of your first LP, “If Two Worlds Kiss”? It’s a striking photo and design that almost looks more like an angry punk LP than what the LP actually sounds like. Is that a photo of someone in the band? Who is it?

It’s a self-portrait of Marcus Giltjes, our first drummer. He studied fine arts. It is called “PANIC.” And it’s a best-seller as a t-shirt!

Since the advent of the internet it seems the reputation of Pink Turns Blue continues to grow. The internet has made a lot of previously-obscure bands achieve a level of notoriety that they might not otherwise have had. How do you feel about the internet exposing more people to Pink Turns Blue, and conversely do you also feel like maybe it has hurt the band’s ability to earn income from record sales, thanks to mp3 or music blogs and file sharing networks?

What is great about the internet: It is possible to find people liking your music globally. Unfortunately people are not really willing to pay artists in the end since you can get it everywhere for free and you urgently need the money for more beer and parties. Which means that an artist has to earn his money doing crappy day jobs and spend the night and weekends writing and recording songs and playing somewhere. Still, it is great to get heard. Who were some of the bands that exerted the main influence on Pink Turns Blue’s sound when you all formed in the mid 1980s?

We all had different idols, but there aren’t really any surprises here: Joy Division for Tom, Killing Joke and The Cure for Marcus, Siouxsie, and Joy Division and Bauhaus, and later Laibach for me.

Pink Turns Blue began in Germany while the Cold War was still happening, and the country was divided into a “capitalist-democratic” West and a “communist-Soviet Bloc” East. That time period is seen by many as being a gloomy time in Germany’s history. Did any of that filter down into influencing the sound and approach of Pink Turns Blue?

I reckon it was just the opposite of what all the light-blue and pink-white wearing disco-mainstream pop was about in the mainstream 1980s. We wanted depth, doubts, darkness, eeriness. We wanted to sulk. We wanted to probe the depths of darkness. This music was the soundtrack to the ones who wanted to live on the other side, who had a higher artistic or intellectual aspiration than what was being offered in the world of 80s Top 40 and pop music at that time. We wanted to appeal to the poets and the romantics of the age, not to the consumerist mentality that was so rampant then (and now).

Pink Turns Blue’s new CD as well as other info can be found at their official website, here.