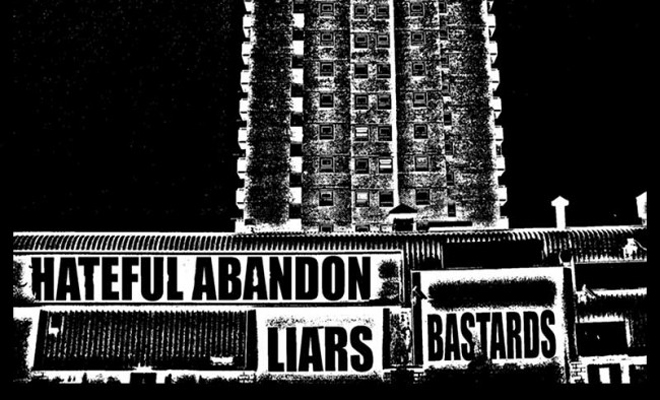 Bristol, England’s Hateful Abandon are probably one of the more adventurous and ambitious bands around these days. Rooted, ultimately, in the black metal scene (specifically, depressive black metal bands Abandon and Basilisk), around 2006 or so frontman Vice Martyr took his project in a surprising new direction, mining British postpunk, goth, and anarcho-punk for the unique LP that would end up becoming 2008’s “Famine (or into the Bellies of Worms)”. That debut LP is a bleak marriage of Vice’s deep, sonorous vocals with the old school black metal of Darkthrone and the gothy postpunk sounds of bands like Joy Division and the Sisters of Mercy.

In a 2006 interview, Vice Martyr explained his turn towards a more postpunk influence in his songwriting:

It’s pretty confusing when you sit down to perform a Black Metal record and the sound that emanates from the speakers is not Black Metal at all. Couple that with the recent spate of ‘cut n’ paste’ Black Metal that gets churned out of teenagers’ bedrooms on an almost daily basis, and you get a pretty frustrated person. […] I’ll never let any ‘genre traps’ get in the way of my musical output ever again… Music genres are a total fucking con, created by music journalists in suits and ties that want to sell you magazines. Hateful Abandon and anything I do in the future is simply music… not Black Metal, not Metal… just music. People can call it Black Metal I suppose, that’s convenient if they simply HAVE to put everything in one little neat and tidy slot. There’s NEVER a limit. Track 4, “The Test” is more of a straightforward noir synth-pop number, utilizing samples and an array of dark synths:

It’s track 2, “Culprit,” that may be my favorite on the LP. Again there’s a militaristic feel coupled with atmospheric, gloomy keyboards, and swirling, slashing postpunk guitar sounds that I think characterizes a lot of HA’s best stuff. One thing that cannot be over-emphasized is the incredible job that Swine’s Tom has done on the drumming. Live drumming mixed with programmed drum machines (or at least that’s how it sounds to me) is combined with the percussive effects of old-school industrial sounds: Things like chains clinking, oil drums being pounded, metal scraping against metal, etc. The element of experimentation that drove bands like Savage Republic and Einsterzende Neubauten to make music is on display on much of HA’s work.

Hateful Abandon’s music is usually shoe-horned into the newer “post-black metal” category I’ve seen bandied about for the past 6 years or so: A newer genre tag that includes bands like Lifelover and Circle of Ouroborus, apparently. Whatever you want to call the music, it’s good. I think “Liars/Bastards” is a better and more cohesive LP than their sophomore Move LP, personally. It’s a post-apocalyptic journey that isn’t bound by artificial genre conventions, incorporating the best elements of the rebellious ideology of Crass records, the original spirit of industrial innovation that drove labels like Throbbing Gristle’s Industrial records, and the somber postpunk and gothic rock of bands like Joy Division and Killing Joke.