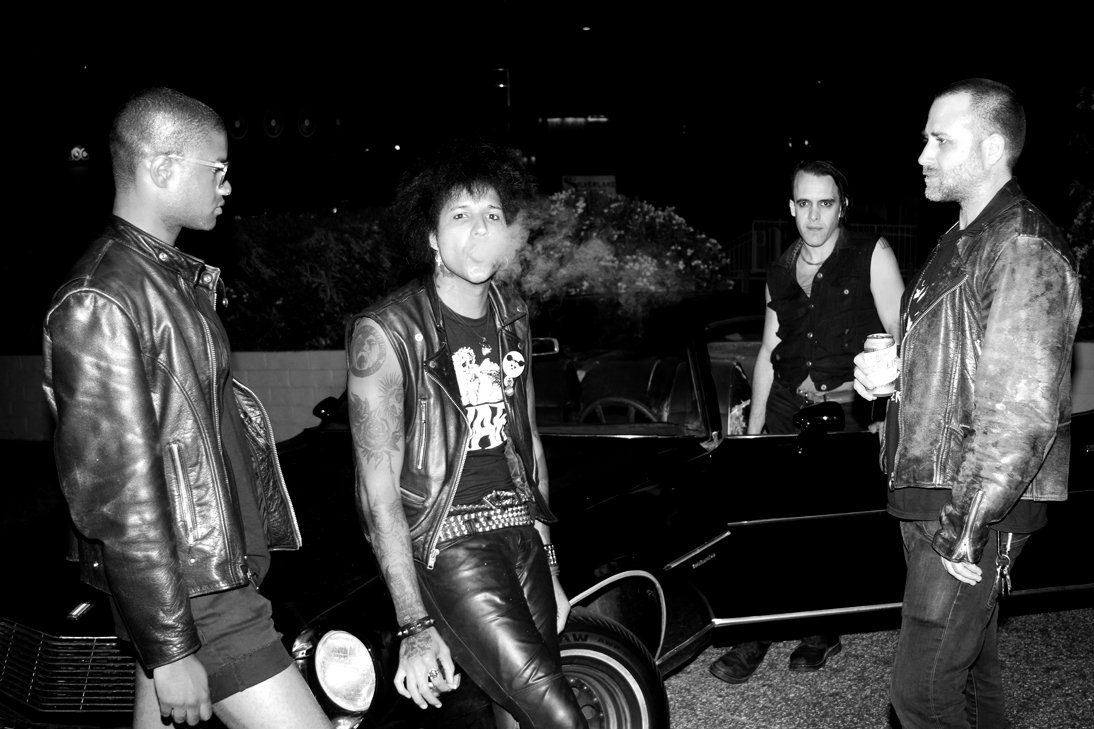 My favorite description of Bales’ previous band, Lost Tribe, is the one at the website of their old label, Blind Prophet: “apocalyptic post-peacepunk darkwave but with a solid d-beat & crust backbone.” (Phew!) Bales’ distinctive vocals have always at once recalled the burliness of Samhain-era Glenn Danzig as well as old UK studs-and-bristles punk, but with a darker edge, and comparisons to old dark UK postpunk like Vex and Killing Joke are usually never far off, either. The Wraith’s new demo shows Bales’ vocals continuing in that tradition, with Colin Ambulance (formerly of LA deathrock band Cinema Strange) providing some flanged out guitar.

Give it a listen: Davey Bales was interviewed by Oliver Sheppard in September, 2016.

Davey, how long have you been writing poetry, and did any of that feed into the lyrics you wrote for Lost Tribe or your new band, The Wraith?

Davey: I’ve been writing poetry since I was 12 years old. I never hung out with anyone when I was a kid because my mother didn’t approve. So I would always listen to classical music and sit down and write what I felt.

Are we talking about your sweet mom that traveled from Waco to Dallas to see you perform (in Shadow Age)??

But obviously you and your mom are on good terms now, right?

Davey: Yes. My mother is awesome! She always tells me to do whatever I want and to live freely. I know your mom lives in Texas. Do you have any Texas roots?

Davey: I was born in Richmond, Virginia. My mother moved to Texas three years ago after she retired from the military.

Do you consider yourself a punk, a goth, or a deathrocker? If you had to choose one, what would it be?

Davey: I consider myself a punk and will always stick to that. My personality is do what you want and be a rebel. The punk movement has always given me hope to be a true individual. Think for yourself, be yourself, and be a leader.

Same here. If someone pointed a gun to my head, that is also what I consider myself – I mean, Dave Vanian and Siouxsie Sioux are some of my favorite punks, but nowadays things are so splintered out that they’d be called goths if folks encountered them in a club.

Davey: You have to understand that everything at some point gets labeled as a certain genre, whether you like it or not. Speaking of punk, what are your five favorite punk or deathrock or postpunk bands… also, what bands do you think have had the most personal influence on you? They can be different.

Davey: Damn, that’s a tough question. As of right now my five favorites are Pure Hell, anything Stiv Bators put out, The Chameleons, Kaaos, and Opera de nuit. I think Stiv Bators is a fuckin’ genius. He’s always had such a great creative way to express how he feels with singing and song writing. He’s a big influence. Plus he’s done so many styles of music.

As far as influences and inspirations in general – Prince. Definitely Prince. I can’t emphasize that enough. A question I am not sure many people have asked – two bands you were in, Lost Tribe and Shadow Age, were actually very multi-racial bands, with women on board in important positions in the former case. I am not saying Lost Tribe was Sly and the Family Stone, exactly but… Postpunk and goth rock are usually considered “white peoples'” music, often ahistorically. I feel like in 2016 in the US, we should be past a point where this is anything noteworthy, but, as a frontman for a lot of cool postpunk and deathrock type bands, what do you think about the progress music or the culture has made in these terms? Have you ever felt like your audience was not receptive to you, but they would be if you were like a pale, skinny, cocaine or heroin-addicted white dude singing the same stuff you were?

Davey: For me, I don’t give a shit about race or what color you are. But I’ve noticed there’s not a lot of black punks in the scene. There’s new bands out there now that have a mix of ethnicity. I do know that there’s racist shit that involves the “goth or post punk scene.” It shouldn’t be about race, or even gender. I honestly feel that we’re all fuckin’ freaks and wierdos, so why be prejudiced? Just hang out with a person, get to know them, and take your racist opinions elsewhere. I love goth and post punk because I feel connected to it emotionally. Just like everyone else. Goth and postpunk are a different form of punk, in my opinion.

So then what do you think about folks like Boyd Rice?

Davey: Personally, I hate neofolk. I’ve read about Boyd Rice and I don’t believe he’s a racist. There are plenty of people who are into history and like to use controversial imagery from history as a symbol. But that’s not always connected to racism. I would just ask him personally what he’s all about. So should everyone else, instead of bashing someone if you don’t know shit about what they stand for.

What are some of the primary influences you think The Wraith are pulling upon?

Okay, that’s all I need to know! Interview over! Have a good night!!!

Davey: Hah. Unlike some Killing Joke material, I don’t actually talk about politics in my songs because I’m not a political person. But Killing Joke is definitely a main influence, both in the Wraith and in other stuff I do.

About your “Dead Flowers” collection of poems: do you read poetry a lot and/or do you have an influences on your poetry? Either writers, or maybe sonngwriters and what they write? I always ask about band influences – you are a poet, I wonder if you have any poets that influence you?

Davey: Yes, I love reading poetry. It’s the only thing I really like to read because I can relate to whoever is writing it. We all are beaten down in life. So why not read something that’ll get you through the day? Three of my main influences are Charles Baudelaire, Sylvia Plath, and Jim Morrison. Those people had power in their words and really made a huge impact on daily life. The most talented people have lived tormented lives. Those are the ones that write the most genius shit. I love Charles Baudelaire’s Flowers of Evil. That guy is my undead soulmate.

With Dead Flowers, what were you trying to express, and do you think you achieved it? What inspired you to write these poems, and what made you choose these specific poems to include in the collection?

Davey: I’ve always wanted to share my poetry with people who can relate to it. Either you like it or you don’t. It doesn’t bother me none if you don’t, but if you like music, you should read the lyrics. I guess what I’m trying to express is myself and how I view the world. I’m not doing it to be cool or hip; this is how I feel about life. Writing is the best way of expression and it really helps get your shit out. It’s the same as being a musician. You put your time and effect into what you’re creating and you share it.

(Indistinct chatter about graveyards and the black arts.)

When do you think you will tour again? Either with The Wraith …?

Davey: Shadow House and The Wraith are going on tour in January 2017. We’re gonna start booking it soon. We wanna do a small tour first and then see what’s up before we come to your neck of the woods.

The Wraith have a Bandcamp page here. They also have a Facebook page here.