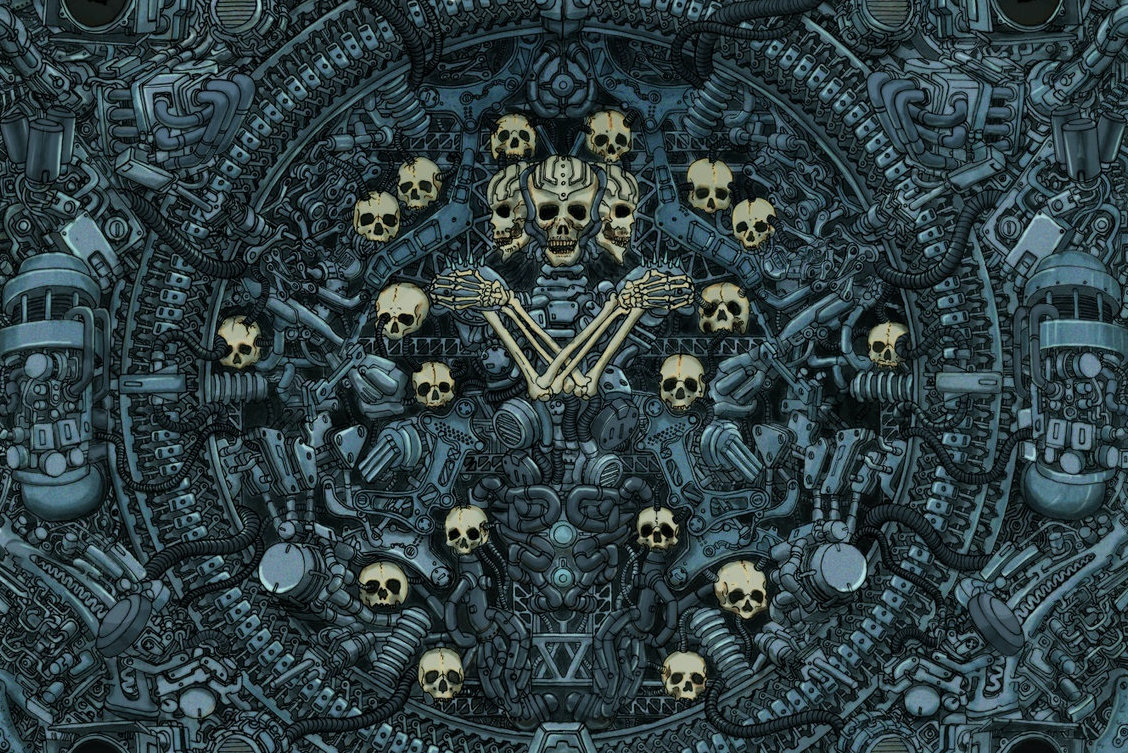 When the Spanish doom trio dropped their debut album Gran Poder in 2006, they were starting their careers far ahead of where most bands end their musical development. While it was immensely heavy, Gran Poder illustrated Orthodox’s ability to mix jazz, improv, and noise into their sound to stunning effect. This experimental streak has been an integral part of their sound ever since.

In 2011, original guitarist Ricardo Jiménez departed the group and they continued to operate as a bass and drum duo, often incorporating various other instruments into their eclectic sound. Now, they are poised to release their latest album Proceed on June 30th and it will be the first to see Jiménez incorporated back into the fold.

One might assume that bringing back the guitar would lead Orthodox toward more conventional territory and they wouldn’t be entirely wrong, but “conventional “ is a relative term when it comes to these guys. “Past Seers” kicks things off with an immense doom riff, that while excellent, is more powerful than it is unusual. Yet, around the three-minute mark bassist, Marco Serrato launches into a solo that is as cool as it is unexpected. It’s too short given how awesome it is and when it’s over they return to the tectonic doom crawl. Later on, Jiménez launches into his own guitar solo, which is equally thrilling. His sound is more Casper Brotzmann than Tony Iommi, his six-string launching shards of noise across the sonic field.

If “Past Seers” was doom with some unexpected twists and turns, “Abendrot” takes things into truly challenging territory. From the opening notes, Orthodox burrows into a chugging but asymmetrical groove. It’s as if Meshuggah chose to cover Sleep and it came out sounding like neither of them. Maybe it’s Godflesh for fusion jazz fans. The whole thing is heavy and hypnotic, seemingly built from variations on a single riff but every moment feels like a surprise. Find a music theory professor to explain whatever it is they are doing here.

Throughout Proceed, Orthodox moves from highlight to highlight. “Rabid God” invokes Unearthly Trance and the aforementioned Casper Brotzmann simultaneously. At times they hint at industrial influences and the drumming is insane. “Starve” hints at more traditional doom for a while, but midway through really hits on a punishing industrial groove reminiscent of early Godflesh or Scorn’s debut “Vae Solis”. After that, the trio dives into a mesmerizing riff maze that is simultaneously catchy and discordant.

The album closes with “The Son, the Sword, the Bread” and “The Long Defeat”, two songs both circling the ten-minute mark. The former starts off by fully embracing a free improv approach. A lone guitar figure rides on top of a scraping bass drone while Borja DÍaz’s drums interject thunderous tom rolls. Serrato’s vocals eventually arrive sounding like Jaz Coleman spewing the gospel of the slow-motion apocalypse we are living through. There is a doom riff that appears and disappears throughout and one can only imagine that it signifies the part of the ritual where the fires are lit and the censers burn. The deftness with which Orthodox executes such an avant-garde piece is a true testament to their skills as musicians.

Where “The Son, the Sword, the Bread” reveled in abstraction, “The Long Defeat” is crushing in its directness. They maneuver from one killer riff to the next with an elevated sense of urgency and each section lands with the precision of a surgical strike. “The Long Defeat” feels like the climax of the album, not just because it’s the last song but because there is a palpable sense of desperation to the delivery. Orthodox slows things up towards the end and it feels like the world is truly burning, is truly being purified by the flames.

Proceed is a truly astounding record. The instrumental performances here are unprecedented in the doom scene and the material is flawless. If I have shown my hand already, this is a definite contender for album of the year. Orthodox provides the heaviness that every doom fan seeks but also gives so much more. Crank this one up as the world burns down around us.