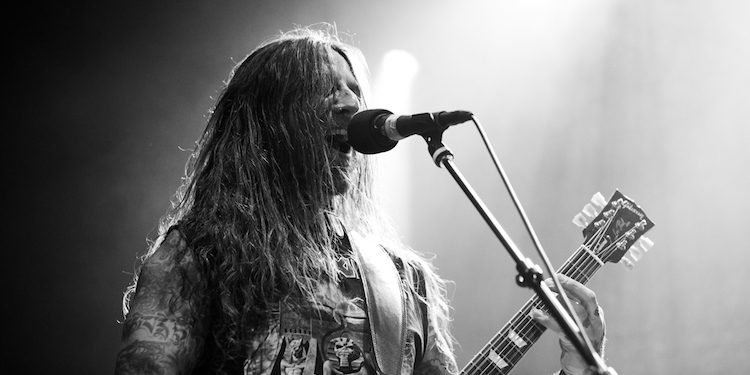 I should be better about honoring my grief but I’m not and so in the panicked throes of knowing that the weight of loss might someday consume me, I turn to bands like Amenra whose long and storied temple of worship is built to honor the triumphant and terrible witness of being in the presence of a singular, communal sorrow.

I must admit, I don’t listen to them much on my lonesome. Their emphatic and blackened orchestrations often prove too painful to bear in my day-to-day Man v. Modern World routine but I will always take pains to experience them in community where I can close my eyes and just be a body in a sea of skin, screaming, weeping, wondering at volume and torment as light.

I would say more. I should say more. But tonight’s set strikes a decidedly solemn chord in me that will leave me circling silent in the eddy for weeks.

My first band was called Angel Ratt and we weren’t so much a band as a pack of recently pubescent dinks trying to make some noise at the Catholic School talent show. We had posters, guitars and the unshakeable belief that if we just got up on stage and started “playing” something truly magical would happen.

We sucked so hard, in fact, that we were politely asked to leave the stage less than a minute into our hideously ill-conceived ripoff of “Bohemian Rhapsody” by a portly nun who swore the Blessed Mother would appear to her every time she stared at the sun.

So why bring it up?

Well, Charles circa 1992 didn’t really have a finely tuned ear or any really sense of progressive causality. Not only did he think the arena operatics of Queen and the thrash calculus of Voivod were sisters in the same noise but believed the jaw-dropping virtuosity in each was something innate and easy and had nothing AT ALL to do with years and years and YEARS of practice but once that egg cracked he kinda got it in his head that Voivod were show-offs and more or less wrote them off.

And that was dumb because Voivod are fuckin’ awesome.

A rather abrupt counterpoint to the palatial tumult of Amenra, Voivod kick out the jams with the old school weird and wonderful, blazing through their decades with a hard-wired glee.

If I weren’t so dumb I’d name check all the acmes but I am so fuck me runnin’ but still this band, this set is one of the most delightful and delighted I’ve seen in ages and OH! how I wish I weren’t such an arrogant little shit for so long and could raise my head back and shout along but there are MORE than enough folks here rocking the fuck out to make me feel like I’m part of the chorus.

The first and last time I saw YOB was in a heat-stroked Texas dive at 1 AM and, yeah, that was pretty fucking revelatory but I’ve often wondered since then if my praise of the band had as much to do with dehydration and intimacy as their ability to melt my face but here we are, sold out in Brooklyn, in a place that could raise a small army.

The air is cool. The night is early. I’ve had as much water as whiskey.

With their sap Sabbath psychedelia and tireless commitment to being, YOB reigns HUGE over the room, pounding and shredding through a set of howling ellipses so devastatingly massive it could birth a small universe.

Yet for all their ruthless heft, YOB is determinedly joyous.

And why wouldn’t they be?

After decades of trudging through the mire and Mike Scheidt almost fucking dying, YOB are finally, fully welcomed by the many as a force of love and light in a scene too easily impressed by lock-jawed reactionaries.