While You Hate, We CREATE! Fuck Racism in Metal! - CVLT Nation 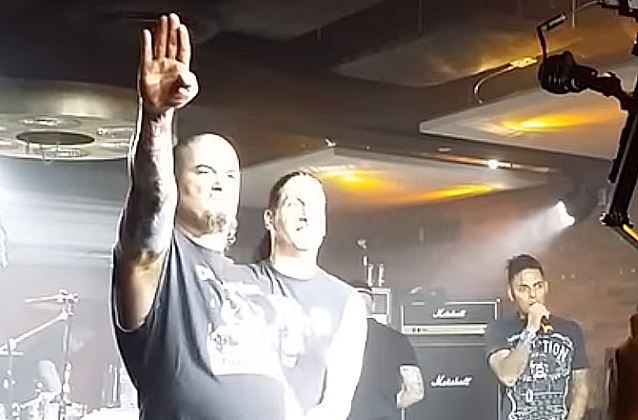 Racism is never a joke…Phil Anselmo, you straight fucking played yourself in the eyes of so many, and CVLT Nation will never support you in any way or form.

I have been an active part of the underground music community since the early 80s, and I have never made the color of my skin an issue until today. In the 35 years that I’ve been going to shows, playing in bands and collecting and appreciating punk and metal music, I have seen musicians and fans of all colors, cultures and genders. When Meghan and I started CVLT Nation, we decided that at its foundation we would ignore all music with a racist and sexist agenda. We weren’t going to get on a soapbox about it, it just wasn’t going to make it on the pages of this webzine. We would get angry in private, and publicly we would erase racism in metal from existence.

But we’re not going to lie about the music and cultures we admire. We post about hip hop, we post about Nina Simone and black biker gangs, and when we can’t stop ourselves we post about police brutality in the black community. And every.single.time. we have to deal with some maggotty racist scum bubbling up to the surface to tell us to stop with our “black propaganda” or to tell us how superior the white race is. We just delete, delete, delete. And move on. Because of two things: 1. Anyone who espouses the belief that the 0.01% of their DNA that determines their external appearance makes them genetically superior to another human being is a fucking fool and astoundingly ignorant; and 2. Because these ignorant cretins could never convince us that we should not listen to this music, love and support this music and above all lose our self-respect and love for each other and our family and friends because of something so insignificant as race. In the past, we’ve been told that if we don’t condone racist ideologies in metal, then we shouldn’t be running this site, because extreme music holds extreme views. In our opinion, racism is not “extreme,” it’s ignorant, dumb and worthless. So to those people, we say “fuck you” and move on.

For anyone who doesn’t already know: CVLT Nation is run by an interracial couple with three awesome biracial kids that we love with all of our hearts. Our 4.5 year old and 2 year old daughters have more metal running through their veins than most of our readers. I doubt even Phil Anselmo can claim that as an infant his favorite music was fast and heavy. When I heard Phil say “White Power,” it hit home, because it meant not only he does not think I should be a part of this community that I’ve dedicated my life to, but also that my children should not exist and I should not be married to my best friend. I know that we have some readers that might agree with his statements, or be apologetic for them, and to those people I say this: it’s your right to read our site, and thanks for the hits and for helping us feed our family, but just know that this site is run by the people you think you HATE, and by people who you think have no right to have a say about this music and this community.

It’s time for us all to take a stand against feeble-minded people like Phil Anselmo and all who think that what he was saying was a joke!

If calling Anselmo out for holding beliefs that show zero respect for us and our family and friends – including musicians whose talent makes Anslemo look like he’s got his thumbs up his ass – makes us Social Justice Warriors, then so be it. I would would rather be that then a racist piece of shit who has ass-backward views and can’t think for themselves. I have family members who were raped and lynched, but even if I didn’t, I couldn’t be silent about this, because if I don’t speak up I might as well be down with Phil. Honestly, I find it ironic that Phil makes money off of reworking blues riffs, but hates the people who created them. It doesn’t get much more ignorant than that.

Much respect to everyone online and in the real world who are brave enough to speak out against racism in Metal. Phil Anselmo’s idiotic actions may have inspired this discussion, but we have to acknowledge that this problem runs deeper than just one person in the industry, and should be addressed more often. To all of our racist, sexist, xenophobic or homophobic readers out there in cyberspace: please unlike us, because we don’t fucking like you! While you hate, we CREATE!