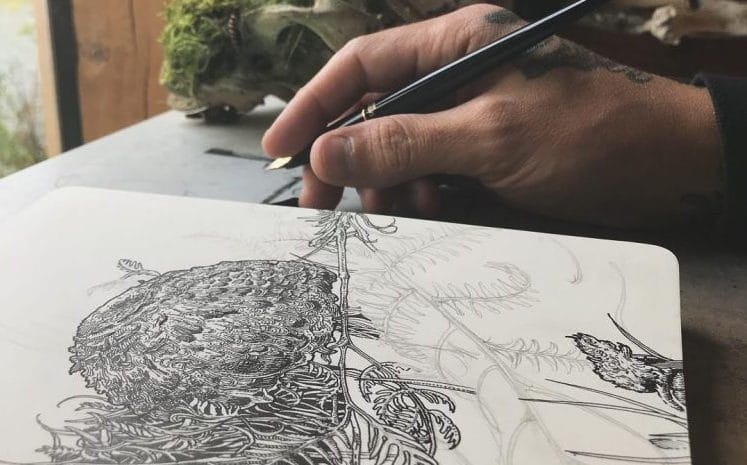 All the photos in this article: @richeybeckett

“When I was a child, my family brought me pens and pencils every birthday, every Christmas. They always gave me a set of colored pens, and I took the black pen out of every single art set and just used that,” artist Richey Beckett remembers his first approach to art when he was just a tiny child. Working predominantly in pen and ink, he has gained recognition for his intricately detailed record covers, movie posters, and screen-printed artwork.

“My earliest memory of drawing is reading the Beano comic and drawing my own comic strips and characters and trying to create my own little stories. When I was about 20 years old, my parents found in my house down on the skirting board on the floor where I’d drawn pictures as a child, and no one ever knew they were there until years later. And my parents were painting, redecorating a room and they found these little drawings that I’d made when I was probably crawling around as a child.”

Although the subjects have changed during the years, Beckett’s style has always remained faithful to a single technique. “I always just identified with pen and ink crosshatching style. I remember my father teaching me how crosshatching worked, and that made complete sense, so I felt like I understood that language. But then I got into fantasy, like Warhammer, like fantasy bows and Games Workshop stuff. So I would draw a lot of that stuff, like fantasy art goblins and barbarians and things like that. That was probably the next step, I think. Going from drawing cartoons as a child to nature or whatever and then drawing like crazy fantasy scenes, really chaotic. That was probably the next stage. Throughout school, that was what I was drawing”.

Beckett uses traditional pen and ink methods to create lavishly detailed pieces of black and white illustrations. Taking influence from historic biblical, literary and natural history illustrators and engravers such as Doré, Durer, Audubon, and Bewick, along with the decorative flair of Art Nouveau, he creates his own organic world which expands with each new piece.

“I remember being in school, and there was one moment they showed us a Durer piece, and I was just like, ‘what is this? This is my shit.’ I just identified with it and loved the style. I had learned to draw in pen and ink and crosshatching from a different background. And, somehow, at that point, I suddenly saw the same style I was familiar with but in this whole different context that I’d never seen before: these really dramatic, biblical images, drawn in that same method, though. And I was like, ‘this kind of this speaks my language.’ It resonated with me. Even talking about it now, I can remember that moment of seeing it being revealed in my classroom. And they brushed over it and just carried on talking about something else. So after that, I went and just researched it and found out about Durer and Doré and things like that,” he admits.

“It makes sense in terms of taking something from nature, turning it into something symbolic and also using it as just a decorative element. You can go out in nature and just find something that’s really beautiful and rather than just drawing it, actually turning into a frame for something or a decorative motif,” he explains. “People have always done it, and I think that’s a fascinating thing to take those natural elements and really emphasize them even more. They’re already beautiful but then use them purely for their beauty. I love with Art Nouveau the symbolic nature, as well. Always trying to have hidden symbolism in there, and it tells a different story to different people.”

Nature is the predominant element in Beckett’s drawings.“I pretty much harvest things every day. I’ll take my dogs out every morning, and while I’m out, I’ll always be photographing things. I’ll come home with pockets full of leaves and shells and whatever strange shit I find, bones, etc. And I’ve always done that since I was a child,” he confesses. “I collect things I find, even on the street, whatever it might be. Something of interest and then collect it. I have boxes full of just weird oddities and a bit of a hoarding mentality, I suppose. I still do that now, but it’s more just things from nature, and it could just be one single little leaf or something really minimal. But when you start to look at the minutiae and detail of it, it’s always full of inspiration.”

Living in South Wales (UK) has a significant impact on his art.“I’ve lived in the countryside for the last four years now, in a pretty remote area. And I’m surrounded by it. I see it all the time. I see the seasons revolving around me. If you’re in the city, you don’t really see that happen, only a tiny amount. There’s not that much to signify it, whereas when you’re in the countryside every day is different. So, yeah, I’m never short of inspiration, for sure”.

Music has always been another big muse for Beckett. He did graphics for bands like Metallica, Grateful Dead, Mastodon, Converge, Kvelertak, Baroness, Unearth, Trash Talk, New Found Glory, Sick Of It All and many more. “I’ve always been a huge fan of music, for my whole life,” he says. “I played music for years. After art school, I just played guitar for ten years and didn’t make any artwork for the whole time. I’m just obsessive over one thing or the other thing. So I jumped off the art ship and just started making music and did that for ten years. What it meant was that, at the end of that run, I then started designing band shirts, record covers, things like that. I think that because I had been on the other side of it, I knew the mechanics of how it worked and maybe what the artwork means to the band. So I could have a bit of empathy, like saying, ‘I’ve been on both sides of this, and I know how important this is to you,’ and hopefully have a level of communication and understanding for that. I did a lot of record covers early on, and I knew from being on the other side of it how important that is for a band. If you’ve been working on a record for maybe two or three years even in many cases, that record cover is kind of the torch that’s going to represent all of this work. And you want to do it justice, and you want it to be something that’s honest and articulate something for that band and the music. It’s a lot of pressure though, so now I tend to do more gig posters because they’re a bit faster than doing record covers. I love that. I remember growing up and seeing my Dad— Whenever he put a record on he’d put the cover-up on the display while you listened to it. So if you were listening to Dark Side of the Moon,you would see that cover there the whole time, and you couldn’t separate the experience from the visual.”

“The Pink Floyd record covers are the ones that stick with me most, for that reason,” he admits. “They’d always be on display when the record was playing. So you couldn’t separate the visual from the music. That’s, to me, part of the whole experience.”

Beckett’s first approach to posters and record covers dates back to the time he was playing with his band. “At the time I was playing music, I ended up making artwork for my own band just out of necessity. It was a hardcore band called Shaked by Fate. We toured all over Europe. It was kind of hardcore but more technical. The way I would write music is the same way I would draw early on where it’s just, like, if I drew a picture and just filled a sheet with chaos. The music is the same, like 20 riffs per song, not just one thing. I feel like I didn’t want to leave too much space and it’s the same with artwork.”

“Anyway, with that band, it was the case that we’d be going on tour and we’d need a new shirt for the tour. So I would draw something up and then when we’d go out on tour other bands we’d played with would see the merch we had, and they’d say, ‘Oh who designed the t-shirt?’ And I’d be like, ‘Oh, well I did.’ And they’d be like, ‘Could you do one for us?’ So, I’d come home from a tour, and I’d have three or four commissions, and that’s literally where it started. Then I’d do them for friends’ bands, and that became a catalyst for then getting into gig posters. And it just built from there. And then I was in record covers, and each step of the way you build it up gradually, from doing a t-shirt and you’re like, ‘This is super cool.’ And imagine one day I might do a record cover. And then you do one, and it’s like, ‘Cool. What’s the next small goal?’

In his long career as an artist, one of the most significant achievements for Beckett was being the artist in residence of the 2018 Roadburn edition. “I’ve never done a gallery show. I haven’t figured out how to do it or what it should be. So I’ll tend to finish a piece, and I’ll put it in a drawer, and the work will be done, and then I’m on to the next one,” he says. “Arriving at Roadburn last year and seeing all those banners was kind of overwhelming, just to see my own work on display in that way. But it was wonderful. It was amazing, and it was an honor to represent Roadburn.”

“It’s a unique festival, and it’s the perfect place to have a gallery like this where people can understand the relationship with the art and the music. I think there’s something that runs through it where the audience is a lot more open-minded than other festivals. Everyone’s open to seeing new art that they’ve never seen, meeting new artists or going to see bands and playsets they’ve never seen or heard before.”

Beckett has a precise idea of his plans for the rest of the year. “I want to explore more doing these sort of bold, bright, really colorful pieces. The Full Bleed exhibition during Roadburn is a chance to experiment because it’s the only time I’m really creating artwork that’s not for a strict project. I experimented a lot with these bold colors on this set for Full Bleed, and I want to keep doing that now. I’m excited to see where that goes and just create some massive, bold, bright prints, something really different and just keep exploring that. And do more gig posters. I think that’s the most fun thing to do for me, at the moment, because you don’t have that same pressure as you do record covers. But you’re also a lot freer to experiment and try things out. That’s where I have the most fun at the moment.”

In this article:#art, design, richey beckett 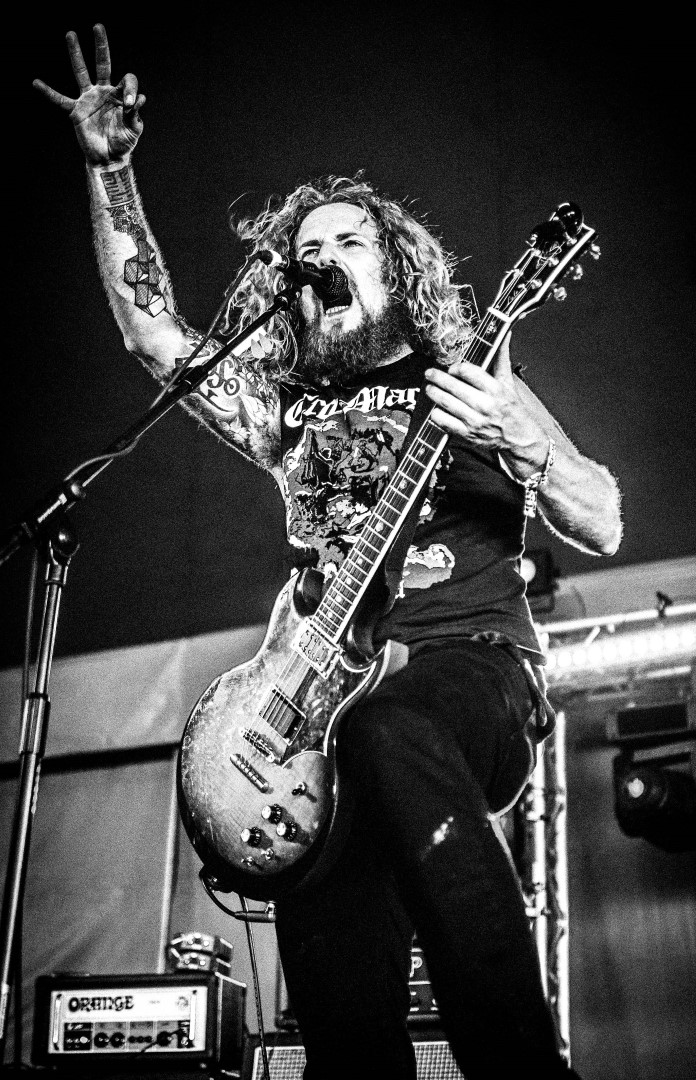 Below is the interview I did with Jimbob Isaac of the exceptional Hark. Personally, I’ve been a fan of his work since the Taint... 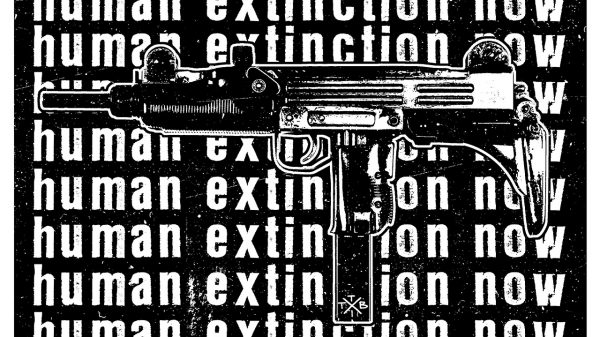 Many consider themselves artists, or designers, Some are good at what they do… I think he is So go ahead and check out TOM...