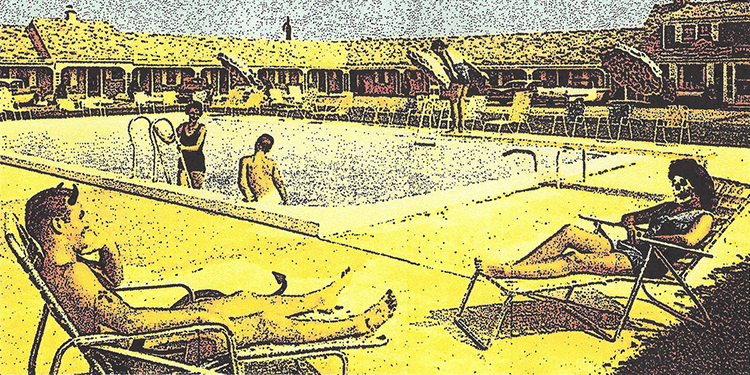 As a species, we’ve had a good run. Now, by our own doing, it would appear as though the combination of mother nature and the rapid nuclear proliferation by unstable states is more or less going to be our demise. Which is fine, I guess. It’s not like we really have say anymore – we’re more or less at the mercy of irreversible environmental degradation and neoliberal foreign policy. So, with that in mind, I guess it’s time for all of us to face the music, and I think it’d be very fitting that first music we face is an EP titled Rotten Earth by Arizona’s Arm’s Reach. Living in the desert just breeds pessimism. Fuck, even during the “winter” it’s still too goddamn hot to wear a sweatshirt. The dry, unforgiving heat of the southwest does things bands that just can’t be explained. It can only be heard in the music. There exists a constant battle to take pride in your home state, yet completely denounce its polices and downright miserable weather. Arm’s Reach are of course no exception; the band has been clear from the beginning that they have no interest in tolerating the ever-growing white power movements in AZ, as well as confronting the existential dread we all feel in these uncertain times.

The band’s newest EP is a six song assault on all things you fucking love to hate. Centrists, white supremacists, climate deniers, cops, and perpetually positive humans have no business listening to this record. Its not for you. It never will be. Arm’s Reach has officially found their sound by tapping into their love of hardcore throughout the ages. Big two-steps, blasts, side-to-side, and wall punching breakdowns as well as a complete sense of hopeless rage accompany you in every track. Rotten Earth is essentially what you’d get if Without a Pulse-era Cruel Hand, Focused Minds, and Wolf Whistle all got together one day and said, “we should fuck.” This is best illustrated on tracks like Spineless and Enforce and Oppress where the guitars and bass drive with simplicity all while the precise, yet pissed off drums and vocals carry the songs and elevate them to A+ hardcore jams. Arm’s Reach is their ugly and unrelenting offspring who have been involuntarily tasked with existence when they’d much prefer the void. Hell, at this point I think we all would, but we can’t go back.  So in the meantime, as we await our imminent collapse, I sincerely hope you give this EP the same amount of time you devote to scrolling through memes and pictures of food from restaurants in gentrified neighborhoods. I promise it’ll be just as satisfying, and by that I mean dismal and bleak, much like navigating the shit-filled conditions we’ve made for ourselves.