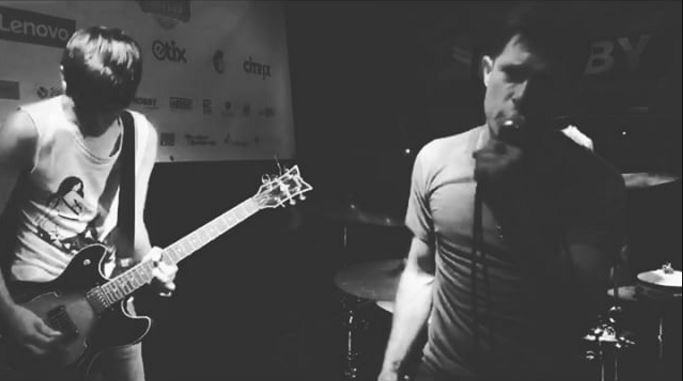 Postpunk duo Voight-Kampff have been around about a decade, first under the moniker Run Down (after the Saints song), then changing their name to its current form when they recorded their first LP in 2011. “I never really liked the name Run Down, so I jumped at the chance to change it,” singer Joseph Sulier explains. Colin, the other half of Voight-Kampff, elaborates: “In Philip K. Dick’s Do Androids Dream of Electric Sheep? ‘Voight-Kampff’ is the test/machine responsible for determining human from Android. The loose idea is that if you can’t distinguish what it means to be human then you have to ask if it means anything at all….”

Voight-Kampff’s new 12″ EP, “The Din of Dying Youth,” was recorded last year but is set to be released on Deranged Records in a few weeks (and in Europe on PTrash Records). The album puts on display the contrast between machine and human that is referred to in the band’s namesake; take, for example, track 4 on the new album, “I Believe in Love” – it announces itself with a clanging, icy drum machine, but is soon awash in balmy bass guitar lines and reverb-treated baritone vocals. The 6-song EP as a whole is a gritty meditation on loss – the loss of innocence that comes with growing older, the loss of lost time, lost loves, losing out to the inevitable process of aging, gradually surrendering to persistent forces of entropy and decline. What’s it all for? “Din of Dying Youth” serves as a weighty treatise on giving up the past for an uncertain future. On the new EP, Joseph’s deadpan, disaffected singing style recalls the classic era of Factory Records-style postpunk and 80s coldwave; Colin’s guitar work gives the band a slightly noir-ish Gun Club or Crime and the City Solution feel. The two elements blend together to produce an LP that is solidly in the dark postpunk vein of bands like the aforementioned Gun Club, but also the Birthday Party and The Sound, and whose song stylings contain more than a few nods to the Wipers, too. More recent sonic reference points could include The Observers or northwestern postpunkers in Lunch, although “Din of Dying Youth” is very much its own work stylistically. Joseph’s pained vocal style can be especially reminiscent of those of Adrian Borland’s in The Sound on several of the tracks.

Given the dark sonic journey that one is taken on throughout the EP, it’s easy to forget Voight-Kampff’s past in hardcore punk bands Formaldeyhde Junkies, The Breaks, and Damage Deposit; you’d never suspect, given the sheer gloom of “The Din of Dying Youth,”  that Colin and Joe were in some of the best USHC revivalist bands of the previous decade. In fact, Voight-Kampff are in good company with bands like The Spectres, Deathcharge, The Estranged, and The Observers/Red Dons – bands that began shedding the trappings of the d-beat and DIY underground purist hardcore revival of the first decade of the new millennium to explore and reclaim the rich legacy of postpunk, deathrock, and dark punk of the 1980s that had been woefully neglected by many punk bands until about a decade ago, when this project started. From a songwriting standpoint, Voight-Kampff has most in common with Colin’s prior project, Safewords, one of my favorite bands of recent years, a band that masterfully synthesized the guitar sound of bands like Warsaw and Crisis and melded it onto Wipers-esque basslines and song structures. (The Voight-Kampff symbol even looks a little similar to the Safewords’ logo.) “Din of Dying Youth” proceeds in the same vein but adds a touch of darkly shimmering psych-rock along with the gothy roots-noir postpunk of a band like Tex and the Horseheads or the Inca Babies, creating a sound that is a definite break from past projects. The first track on Voight-Kampff’s new EP, “Victims of Desire” – which is one of my favorite songs on the release – even reminds a little bit of The Dark’s classic goth-punk number “The Masque.”

Below I asked Colin and Joseph about the new EP and what inspired the making of this sonic missive. Voight-Kampff was interviewed by Oliver in April, 2017.

Hey all, to get some basic stuff out of the way – when did Voight-Kampff start, and who plays what instrument? How many members are there?

Colin: We started about 2006 as RUN DOWN after THE SAINTS’ tune. It’s myself on guitar and whatever else needs to be recorded, Joe on vocals, and all but a few shows have been Ashley Hohman on bass. Blanks have been filled in by a slew of sweetheart all stars. This LP, The Din of Dying Youth, is the first where I didn’t play acoustic drums; Cam Craig did the honors.

Joseph: I believe we started around 2006/2007 under the name Run Down and we changed the name to VK with the release of our first full-length in 2011. I do vocals and lyrics and occasional piano parts. Colin plays all other instruments, including drum programming. As far as recordings are concerned it has only ever been the two of us, but as far as live shows are concerned, on the rare occasion that we do play live, we just put a group of friends together to flesh things out, the most consistent member being Ashley Hohman on bass. What is the new release called, and how did you get involved with having it released on  Deranged? Who recorded it or produced it, and when did that happen?

Joseph: The new record is called “The Din of Dying Youth” and it’s a very heavy record both thematically and emotionally. It’s a bit of a concept record about childhood and the loss that comes with aging and various other dark and personal subject matter. It is not a sunny or hopeful record in any regard but I believe it’s the most honest thing we’ve ever done and we challenged and pushed ourselves into new musical directions more than we ever have. Deranged has been releasing our records since 2012. We recorded and produced everything entirely on our own, with Colin doing a majority, over the span of the last 2 years between basements and living rooms in St. Louis and Raleigh.

Colin: It’s called ‘The Din of Dying Youth.’ I recorded/produced it last year. I can’t remember how Deranged first got a hold of us but it was about pressing our self released cassette, Joe can correct me – in any event Gordon [Dufresne of Deranged Records] wanted to work more with us and everything had gone great, so here we are. Hopefully soon we’ll be in your headphones while you’re stoned in the dark!

Explain the name “Voight-Kampff” for folks….

Colin: Joe and I agreed on it. I dig sci-fi and was reading “Do Androids Dream of Electric Sheep?” while on my way to Seattle to play a show with Joe and thought it might fit us better as we had rushed to name the project originally. In Philip K. Dick’s book, VOIGHT-KAMPFF is the test/machine responsible for determining human from Android. The loose idea is that if you can’t distinguish what it means to be human then you have to ask if it means anything at all… Phil is probably rolling in his grave from my paraphrasing.

Joseph: Colin came up with our name in the midst of the recording session for our first full-length. I never really liked the name Run Down so I jumped at the chance to change it. We’re both big Blade Runner and Philip K. Dick fans, and the idea behind the Voight-Kampff test – a measure of the amount of empathy the subject is able to express as a determination of their human or replicant status – really resonated with me. What are some bands that Voight-Kampff members have been in in the past?
Colin: I played in several projects in Minneapolis: FORMALDEHYDE JUNKIES, SINKS, SAFEWORDS, most notably…? I also play in DAVIDIANS now in Raleigh, NC.
Joseph: I’ve been in plenty of bands since I was 14 but the only two that were really notable were hardcore bands, The Breaks and Life Like. How would you classify or describe Voight-Kampff’s music to someone that had never heard it before? Do you think “dark postpunk” fits? How would you describe it?

Joseph: I’ve always had a hard time describing it to people because we’ve musically evolved so much over the years. I guess dark post-punk is probably the easiest go-to. I’ve just always wanted to create a band that is very emotionally expressive and I think Colin’s guitar work really compliments that sentiment.Colin: That fits. I guess it’s kinda broad, but I can’t see the forest for the trees, so who knows. “Psych-punk gloom pop”?!?? Ha….

Some of the bands that I’m reminded of when I listen to V-K are Gun Club, old Nick Cave, maybe early Echo and the Bunnymen, mid-80s gothic rock. What are some of the primary influences on the band? What are some members’ personal favorite bands?

Joseph: I appreciate the Gun Club comparison, but I cannot stand Echo and the Bunnymen. As far as lyrically or vocally, I’m not sure I consciously try to pull influences from anywhere. I write a lot of poetry and tend to try to reshape some of those poems to fit the music. I’ve currently been listening to a lot of hip-hop like Kendrick and Mobb Deep and more folksy stuff like Ryley Walker, Bill Callahan, Leonard Cohen and Paul Simon, beautiful singer-songwriter kinda stuff. Constant go-to’s are always Morrissey, Belle & Sebastian and Cro-Mags. Been spinning Depeche Mode’s “Music For The Masses” a LOT lately too, a cohesively brilliant record.

Colin: I love GUN CLUB so that’s cool. Miami is my favorite, though it’s maybe not a popular choice… And yeah I also dig BOYS NEXT DOOR a lot and THE BIRTHDAY PARTY. WIPERS were a big influence early on. I love RIKK AGNEW, too, CHRISTIAN DEATH’s Only Theatre of Pain, for sure. Lotsa death rock. THE DAMNED’s Machine Gun Etiquette is a personal favorite, the first LORDS OF THE NEW CHURCH LP, the list goes on…

A favorite question I like to ask all bands: If you were consigned to a desert island and had some magical way to take 5, and only 5, records with you for the rest of your life, and could somehow magically listen to them, what 5 records would those be, and why?

Colin: I can narrow it down to just 5 songs:

Joseph: I sunburn easily and can’t swim so I would probably bring Chopin’s “Funeral March” as a soundtrack to my agonizingly slow death.

Voight-Kampff’s “The Din of Dying Youth” EP will come out on Deranged Records, who have a webpage here.

Voight-Kampff have a Bandcamp page here.

You can get other band merch from their Big Cartel page here.