The find of the skeleton of a “vampire child” in Umbria, in Central Italy, by archaeologists from the University of Arizona and Stanford University, made headlines in 2018. Most of the publicity around this discovery surely comes from the dark aura it spreads, but to a historian’s eyes there is much more to be excited for.

Before we go deeper into Late Antiquity history and Hun’s invasions, let’s answer the question that probably just rouse in your mind: what does it actually mean that archaeologists found the skeleton of a vampire child?

The so-called “vampire skeletons” are unconventionally buried corpses, arranged in a way that should prevent them from rising from their graves and feed on the blood of the living. In the case we’re writing about, a ten-years-old child was laid underground with a big rock in his mouth. To bring other examples, in 2014 an alleged vampire was found in Bulgaria with an iron plowshare stick in his chest and one of his legs removed. In the same year, in Northern Italy, archaeologists dig up the skeleton of a thirteen-years-old girl buried facedown 1400 years before. But why did people give such treatment to some specific bodies?  To better understand it, let’s focus on one very famous case: the Venice vampire, aka the Venice witch.

Between 2006 and 2008, a team of archaeologists working on the Lazzaretto Nuovo Island in Venice found the remains of a woman who appeared to have been buried with a brick stuck in her mouth. The brick was inserted so deeply and so violently that her teeth were broken and her jawbone smashed. The skeleton dated back to the XVII century, right in the middle of one of the deadliest plagues in European history – and this detail is crucial.

In fact, the reason behind this creepy burial style, which presents clear resemblances with the one of the vampire child, is to be found in the mass “vampire hysteria” which used to spread in ancient times in conjunction with epidemics. In eras of superstition and medical illiteracy, the propagation of fatal diseases was blamed on supernatural evil powers, like the ones of witches and vampires, who killed people to quench their bloodlust. Such beliefs were fueled by the appearance of the deceased: the stomach bloated due to the gases produced by bacteria in the decay process, and the bodies poured sewage and blood, that often came out of the mouth. Moreover, the mouth of the dead sometimes spilled acids, which ruined the shrouds, giving the impression that the departed tried to chew it. These signs, which are normal outcomes of decomposition, were understood as clues of the rising  of the dead from their graves to feast on human blood, spreading death and disease, and afterwards coming back to their burials afterwards for a postprandial nap. Therefore, it was necessary to keep the deceased stuck to their rest place and to paralyze their mouth, in order to stop them forever. That’s why the Venice vampire had that brick in her mouth.

The vampire child of Umbria, who was given a similar treatment, shows how old these practices were. The little skeleton dates back to V century (one thousand years before the Venice vampire), in the time of a severe malaria epidemic. In the area where the child was born, the disease was spreading in such a virulent way that it stopped even the most feared barbaric leader, Attila the Hun, who ransacked Italy taking advantage of the agony of the Roman Empire. Some evidences on the skull of the child suggest that he (or she) suffered from mouth abscess, which is a common symptom of malaria and may cause bleeding from the mouth. Therefore, both the vampire child and the Venice witch were given a non-conventional burial in eras of epidemics, when fear of death was taking over and people hysterically looked for a  scapegoat to blame for what they lived as an unexplainable calamity.

Yet there are at least two more interesting things to be said about the vampire child discovery, because the find of a “vampire skeleton” is, in itself, nothing new to archaeology.

The first concerns the dating. In V century most of Western Europe and the Mediterranean area was Christian and Christianity was chosen as the official religion of the late Roman Empire more than one century before. Christianity was widely common even between barbaric tribes, though often practiced in heretic forms such as Aryanism or Monophysitism. The find of an unconventional burial, clearly related to pagan cults, proofs that in V century non-Christian communities were still lively, though rare, even in a Christian area like Italy, and that in isolated places the ancient beliefs survived through generations.

The second highlight concerns the place of the find. The little vampire was found in the so-called “child cemetery”, a site located in the nearby of a Roman villa that was likely abandoned right during the malaria epidemic that killed “our” child. The cemetery itself is extremely weird, as it served as rest place for only for very toddles, newborn and unborn fetuses. Besides the children, archaeologists found also the skeletons of several dog puppies, that were likely sacrificed both to calm down the anger of the Gods and to obtain remedies. 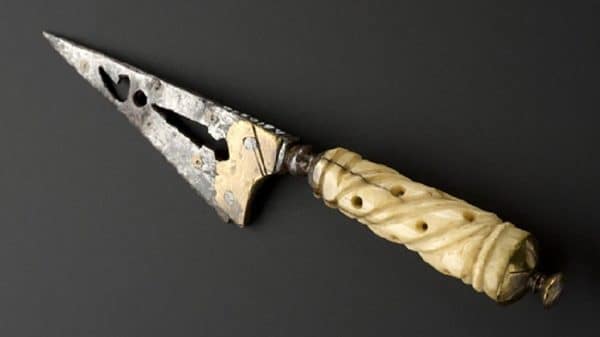