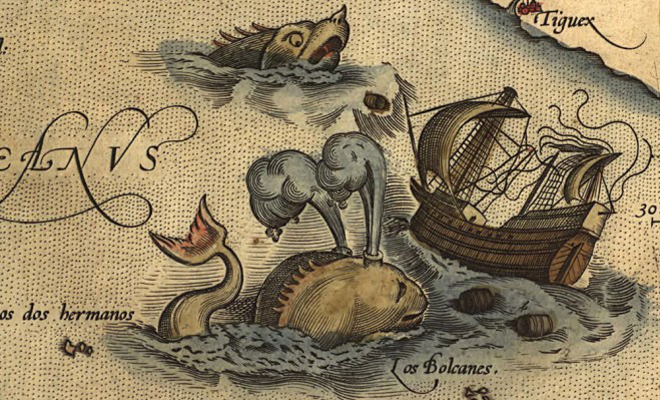 One of the things that is a window into the past is imagination, and medieval imaginations were vivid. Despite living in an age of Church oppression, people found ways of bringing their fears and superstitions to life. Medieval cartographers treated their craft like an art, and added fanciful decoration to many of their maps in the form of sea creatures and monsters. However, many of the monsters drawn on these 15th and 16th century maps were not only for show – cartographers often referenced nautical reports of sea monsters when they created their maps. Sometimes, the monsters were depictions of real witness accounts of what had been seen or fought during a voyage, and put on the map as a warning to sailors in the area. Narwhals became sea-unicorns, whales became angry, scaled monsters, and mermaids and mermen populated the waters of the world. According to Chet Van Duzer, author of Sea Monsters on Medieval and Renaissance Maps, as the age of exploration progressed, sea monsters became less and less frequent inhabitants of maps, which began to be seen as scientific documents and not in need of decoration. Here are some awesome examples of the medieval mind at work – I can only imagine how terrifying these images would have been to someone with no experience of the sea! In this article:medieval, Monsters, Sea Monsters