Having crawled out of the same Florida scene as Merchandise, UKIAH DRAG continues to create twisted soundtracks to the underbelly of trailer park life, despite having fled the sunshine state in favor of New York. At least, that is what I hear when I listen to them. Having liked what the band has done up until this point, I have been more intrigued by some of their more aggressive side projects. They have been wandering into a darker direction with each album. In the Reaper’s Quarters finds this darkness lending itself to more of the bad trip variety than a spooky nightmare. The first song almost has a blues-ridden and acid-drenched The Doors boogie to it, while the psyche smokes out the post-punk more often than not, creating a hillbilly Butthole Surfers shuffle. This is a unique sound, and while it might be darker than crunchy-hippy-psychedelic, it’s not dark enough to be pegged as death rock like you might have seen on some blogs. 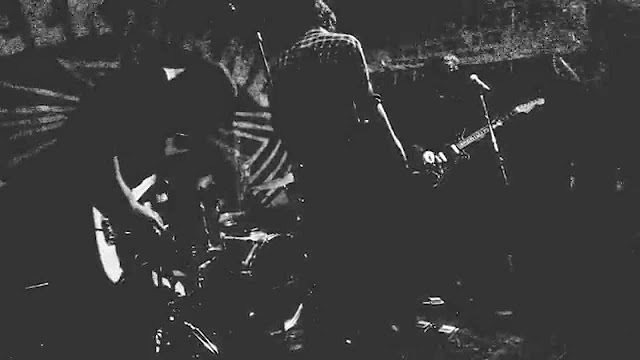 The band does color things a shade darker than your mother’s indie rock with the bass line of “Final Prayer,” and it does have a slight funeral creep to it, but the vocals keep it far from any thing gothy, with the exception of maybe the rowdiness of The Birthday Party – but overall, the bats being released are far and few between. At times, vocalist ZZ Ramiriez brings Mudhoney to mind. The band continues to paint the album within a similar palette, but with more dramatic brush strokes on “Drip From the Fang.” A lower vocal that my girlfriend refers to as “the voice” – which is any baritone that does a variation of Ian Curtis – makes an appearance on this song to offset the more Seattle trailer park vocal that tends to be the predominate voice expressed on this album. The lower voice begins to take over, sometimes adhering to things like staying in key, sometimes not so much.

They close the album out with “Night of Immaculacy,” which lingers in it’s noisy intro in a drone, before a more Iggy Pop-ish vocal wrestles against the Mudhoney tendencies while reciting lyrics at a Jim Morrison pace. For some reason, King Missile comes to mind on this song, even though its darker than what that blast from the 90s did. At the three and a half minute mark, I am wondering how they are going to hold my attention by beating this into me. The answer is they start kicking up noise at the five and a half minute mark.

This album is worth a listen or four, as these guys are doing just the right drugs to keep it interesting, and though they do use “the voice” they stay clear of some of the other post-rock cliches. The album seems to adhere to the motto of “when the going gets tough, the tough get weird,” which tends to work for them more often than not.