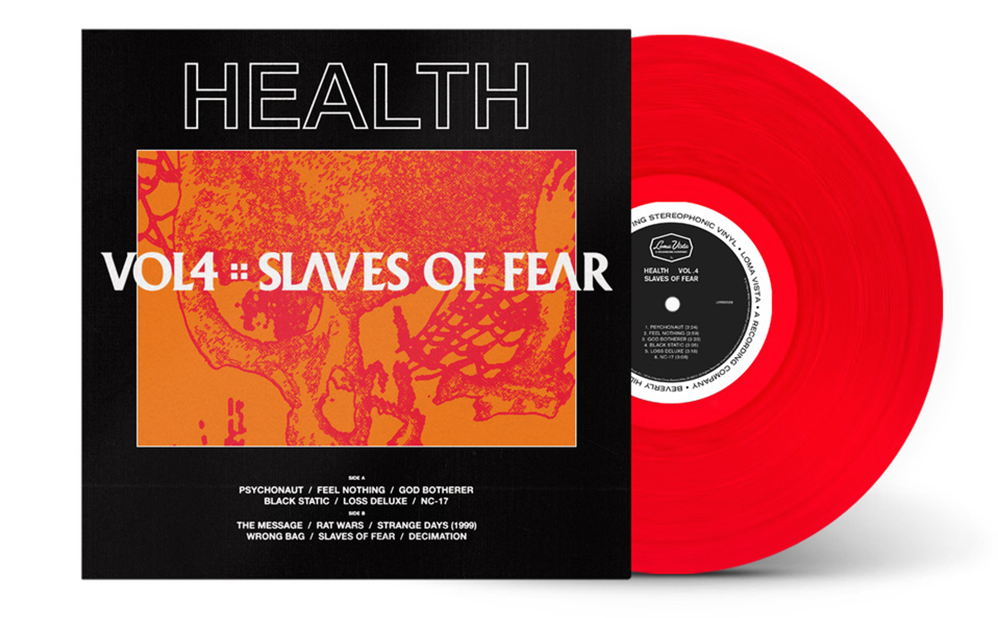 HEALTH is a very interesting alternative rock/noise rock band from Los Angeles, which has been exploring the more direct and melodic intersections between electronic and rock music. Since the mid ‘00s this band has been investigating this concept, resulting in a series of intriguing releases. From their indie rock beginnings, to toying around with noise rock in Get Color and their self-titled album, to full remix albums featuring synth pop and IDM ideas, HEALTH has displayed an excellent ability of crafting catchy and immediate music. That vision however came to complete fruition with their latter work in Death Magic, which found them incorporating an industrial touch to their noise rock core. With their new album, Slaves of Fear, the band carries down this path, but at the same time is able to move into an amorphous place where genres begin to dissipate.

This genre-bending attitude appears in a vivid form from the beginnings of this album where the middle-Eastern melodies of “Psychonaut” introduce this strange vision, before the industrialized rock weight comes in with force. Still, it is that rhythmic backbone that HEALTH establish that is the staggering element of Slaves of Fear. The drums arrive and explode with such power in the opening track and “Feel Nothing”, completely unraveling the progression with their presence. This mechanical structure provides a colder and more detached approach to this work, highlighted brilliantly in “God Botherer”.

Within those confinements HEALTH still undergoes certain mutations. Traveling to a further extreme, the band injects noise elements to their industrial structure, adding to the impressive sonic collage that resides in the background. The opening track for instance arrives with a more volatile sense to its progression due to this vital characteristic. The creative use of effects also aids in that regard, providing the tracks with more depth, as is the case with the final part of “Black Static” and even more with “Wrong Bag”, which completely relies on the sound design techniques to create an impressive ambient structure through the use of soundscapes.

On the other end, the band does not completely lose their humanity and organic quality through the industrial configurations. The first step towards a different direction is the twisting of the electronic motifs towards a more danceable rendition, providing a softer counterpart to the industrialized brutality. “The Message” sees them balance between these two extremes, while “Loss Deluxe” finds them absorbed completely within the groove of electronica.

But, what moves them even further towards an ethereal quality is the mesmerizing characteristic that the vocal delivery brings. There are moments when the vocals on their own are able to awaken an alternative rock spirit, surprisingly moving HEALTH towards a strange Tool-ian direction, while still the heavy beats rain down. This is also where the direct and melodic element of the band works best, as HEALTH are able to unleash some incredible hooks and catchy choruses. “Feel Nothing” is an impressive specimen of that modus operandi, while there are also moments when the whole endeavor moves towards an almost arena rock explosion. The title track is such an instance, starting from minimal beginnings to explode to a fantastic, militaristic progression. Yet, even when the pace drops and a more subtle approach is required HEALTH still delivers mesmerizing moments in “Strange Days (1999)”, or even moving to a ballad-like territory in “Decimation”.

Overall Slave of Fears is a very nice and endearing amalgamation of sounds, motifs and ideas. The most interesting aspect that arises from this work is that even though HEALTH take an extreme approach when it comes to their genres of choice, even including some trashy elements in the mix, the end result is a very easy listening and straightforward record. And that is their strongest quality.

In this article:HEALTH, industrial, Slaves of Fear