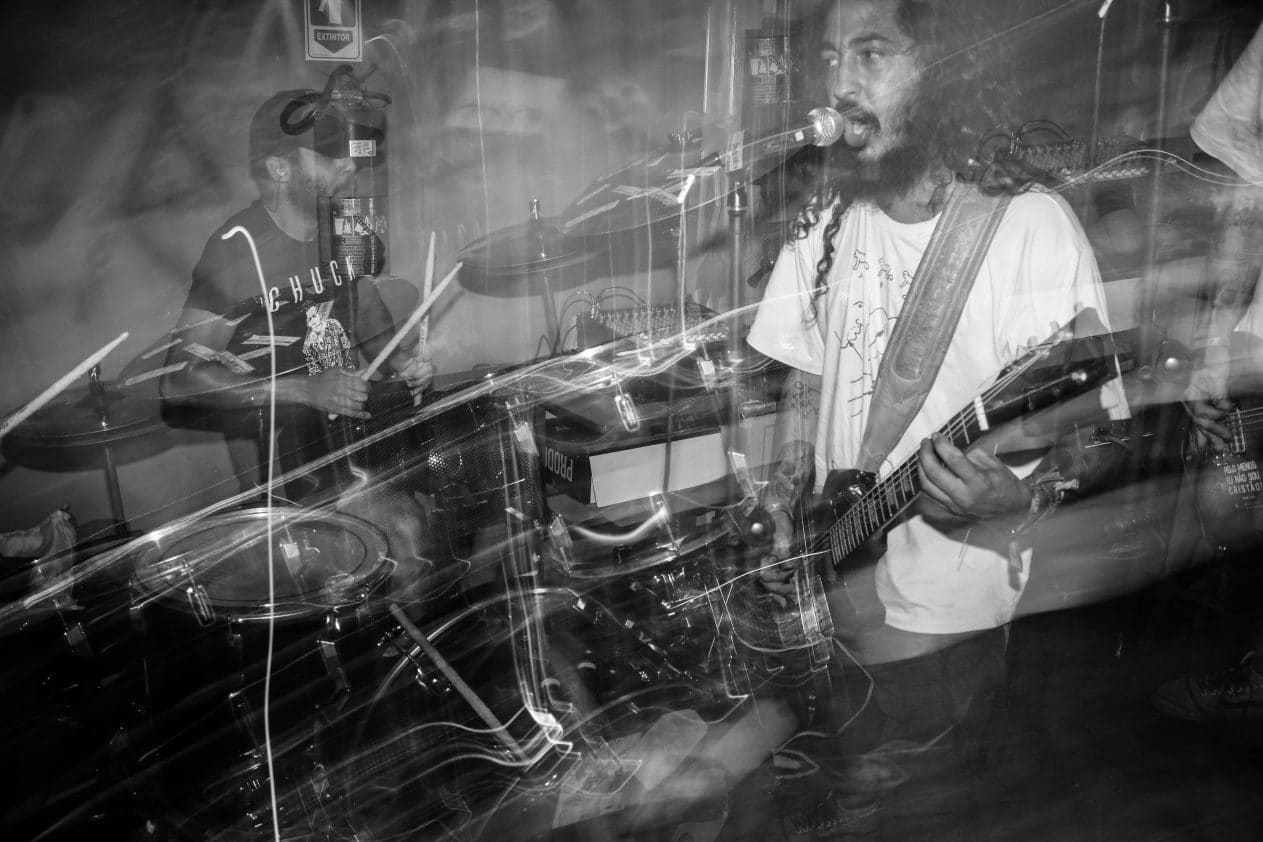 It can be a test of perseverance and a little bit of stubbornness create a band that bets in an extreme sound. But Test, a grind/death duo with hints of punk/hardcore from São Paulo (Brazil) make it happen with their desire to burst your ears with relentless machinery drums, piercing riffs and desperate vocals. One thinks that two guys can’t make a wall of noise like they do, but I challenge you to test yourself (sorry for the pun) by listening to them and prove yourself wrong. Maybe we can start with this video, one of their first clips.

Besides the brutality, music-wise, the creativity and chemistry between João Kombi (vocal and guitar) and Barata (drums) works as a bond to push things further. Their love for rock music and its hellish varieties and the desire to push the boundaries of the extreme genres put the band at the top of their game. Not by chance, they are praised by well-known names in hard music, like Max & Iggor Cavalera (ex-Sepultura), Shane Embury (Napalm Death), João Gordo (Ratos de Porão) and Kevin Sharp (Brutal Truth) just to name a few.

After all this accolades it’s time to try to sums up what makes Test a different beast among their ilk. Well, the band started off in the end of 2010 as a desire of João to got back to make music — he was the vocalist of the also thought-provoking Are You God?. Then he recruited the octopus that attend by the nickname of Barata, who also plays in the grind outfit D.E.R and handled for a while the drumsticks with crust/powerviolence Sick Terror. To avoid problems like no time for rehearsals and travels or have to deal with more people, they decided to go ahead as duo. After that they started to embrace the world going to the streets, literally. Actually to the sidewalk. That was an idea that already existed even before the band is putted together, according João Kombi: to throw the rigs inside a Kombi (vehicle similar to a van), assemble the equipment in the streets with the help of a power generator and show what they can do for the sake of heavy music. Test usually do that in front of venues that held shows like Iron Maiden, Black Sabbath, Metallica, Slayer, Monster of Rock festival, DRI and Cannibal Corpse. It got the attention of those who are roaming close to the events. That’s the way the name Test was getting spread around the underground scenes in Brazil and all around the world. Their mathematical riffs (not mathcore or anything like that) and the fast and thunderous beats help them to impressed people from independent circuit and also from mainstream. The duo already shared the stage as opening act in Brazil with Cavalera Conspiracy, Napalm

Death, The Dillinger Scape Plan, Carcass and many others. They also afford 11 international tour:4 in the USA (including Maryland Death Fest), 4 in Europe (they played more than one edition of Obscene Extreme), 1 in Mexico, another in Colombia plus other in Argentina.

Worth to mention too their prolific discography: we’re talking about at least more than 10 releases between full lengths, EPs, splits and live records. The most recent is an split with Chepang, from Nepal. You have to have in mind that all these pieces have the aggressiveness in common, but they all bring something different to the listener. The latest full for example incorporates some elements like noise, electronics and tribal to the grind/death sound. Proving that Test are aways testing (another pun, sorry again) the limits of labels is the split Otomanos,  with D.E.R. In this material you can hear the bands executing different songs over the same drum tracks at the same time. If you equalize your soundsystem only to one side (left or right) it’s possible isolate each one. And they dare to do it live, check it out here!

Another experimental crazy idea Test did was invited some freinds from other bands to play with them live under the name of Test Big Band. Here we have noises, bass and even a piano.

Test the audacity of your eardrums (can’t help but do this goddamn joke another time) with Test!