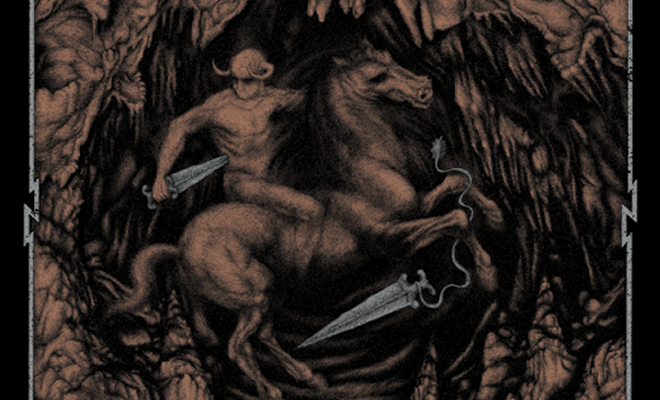 Few bands created quite the stir last year as Bölzer did with their 3 song Aura EP.  At this year’s MDF, people may have been just as excited about Bölzer as they were to see Dark Angel. What justifies a band with only one 3 song EP and a demo being flown in from Europe for one show (and then given a second performance to make up for a cancellation)? Alright, hype machine, you have my attention. I had to educate myself on this new “little Swiss band that could” as I almost entirely missed the boat on them. I made sure to catch one of the performances even though I wasn’t really familiar with them. It was not hard to see that even with a rented back line and likely a raging case of jet lag, they were still absolutely devastating. As a live two piece, they are every bit as confident, full and impressive as Inquisition. Hopefully, the now exponentially compounded excitement surrounding the impending release of Bölzer’s newest EP, Soma, will result in further and lengthier conquests on US soil.

My first mistake was that I initially wrote Bölzer off to be just another in the long string of dark death metal acts, not too unlike the dozens of current hazy Incantation-clones mucking up the game – some for better, some for worse. Whereas most of those groups eschew any sort of melodic sensibility for an oppressive avalanche of power chords and ultra-diminished tones, Bölzer exhibit a skewed, but understated, sense of melody. I do not use the term “melody” lightly. It’s not Burt Bacharach’s kind of melody. It’s melody concealed, only mildly, by filth and murk. We, as believers in outsider death and black metal, can’t be lured in with words like “melody.” No, we need a bitter, medicinal coating around any sort of ear candy. Bölzer ultimately write hooks that strike our ears and function like any melody, yet they are as stygian and foul as any act in their chosen field. Soma drives this point home even further considering that it takes what Aura already established and adds even further darkness. Soma will be a linked release with Aura, whether the band wants it to be or not. It’s juxtaposed to the themes of Aura according to the band. Sonically, though, they could be A and B sides, and make for a great, well developed and thought-out LP. Bölzer are smart to release Aura and Soma as EP’s though. Not only are they able to reveal their cards slowly, but they will be able to draw a psychological distinction between their releases, thus allowing them to make subtle changes to their sound without sacrificing evenness throughout one recording. Soma maintains a more somber and less direct mood than Aura does. Where Aura is feisty and grips tightly around the throat, Soma relents only slightly enough to let some air in and keep the victim alive a bit longer. While Aura stabbed and struck like lightning, Soma rolls, rumbles and pummels like thunder. The differences are subtle, but these are still clearly distinct releases from one another. Soma is only hindered by it’s lack of an “Entranced By The Wolfhook.” “Entranced” (from the Aura EP) was a constant volley of hooky, paranoid sounding riffs, and while ‘Steppes’ is a fantastic song, it lacks the pacing and the bloodshot mania of “Entranced.”  This actually doesn’t take away from Soma, but it rather just highlights it as a less direct, less manic song cycle.  More esoteric songwriting is what makes Soma stand apart from Aura. The EP is closed out by the 12 minute “Labrynthian Graves” which works to further codify Bölzer’s efforts at tightening their sound until the bolts strip out.  As the longer of the two pieces, “Labyrinthian” sets more of the dark tone of the EP than Steppes.

Muscular hooks, a unique tone and an actual sense of melody (no matter how warped or infirm) are what separates Bölzer from the majority of darker death metal acts. As Bölzer’s songwriting skills and all around sense of craft increases, I don’t think it would be out of place to say that their lead on many of their contemporaries (and probably some of the scene’s guiding lights) will increase as well. Both releases are essential, as will be the announced reissue of the bands now legendary “Roman Acupuncture” demo material.