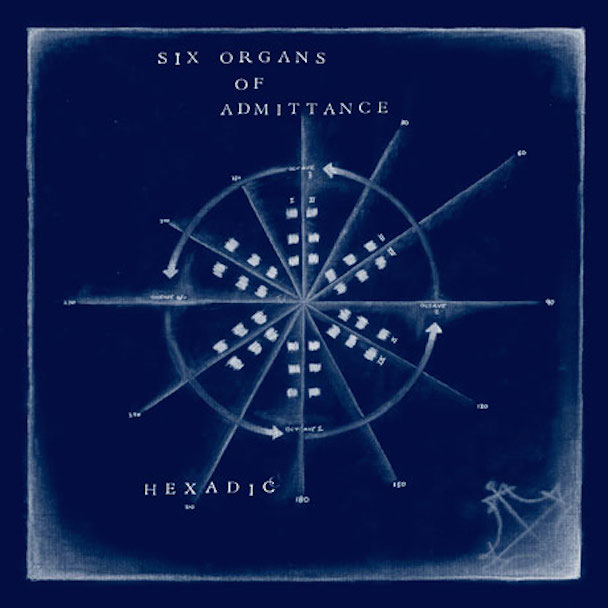 Hexadic is overwhelmed by everything else Ben Chasny is doing. It’s the new record by his “folk” project, Six Organs of Admittance, and it was composed by the Hexadic System (or method), which Chasny invented (but which he thinks is nothing new). The Hexadic System been billed as an evolution in serialism, unjustly as a rehash/copy of Eno’s Oblique Strategies, even as a ploy to sell a Six Organs-themed deck of cards; so Chasney wrote a book philosophically poised to teach the audience his method.

The Hexadic System is a 110-page lesson on the Hexadic compositional method, a soft system. The method is conceived as a relationship bonding a deck of cards to the notes on a guitar: 36 pieces of information. It is a pedantic textbook; a tough read on a lark. The layperson without guitar or cards will be caught off guard by the tab-like tonal planes Chasny draws. The step-by-step lessons don’t alleviate what one hopes. What’s he doing? Here’s a statement:

Each note is assigned a specific card. In the Hexadic System, there are two ways to do that. One way, which I call “Static Correspondence” always aligns the same notes to the same cards. The other way is called “Dynamic Correspondence.” This changes the alignment of notes to the cards depending on what center tone of key one wishes to work in. After this basic alignment is set, there are different ways to create compositional techniques. One is to lay out a specific pattern of cards, the Hexadic Figure, which becomes something of a compositional machine. You could also just draw specific cards and there are more linear techniques for that as well. Another alignment of the cards is to time values. This determines how long a specific note or field of notes can be played for. There are also ways to align a specific intensity to cards.

As one sifts through the chapters, there appears a new method of composing music, but it calls for a musician. We may have to content ourselves with the intellectual universe surrounding Chasny’s work until he writes a new treatise for The Hexadic System. The System is also a game that the author thinks might counteract modernity’s obsession with speed, “as these games and methods of composition were designed to dislodge unconscious imaginative impulses that are hidden by habitual thought processes.” Thus Chasney invents a game where players work against each other to acquire the best tonal fields, their corresponding times of day so as to compose Hexadically. Chasny is all about monastic fun.

Superimposed on this game – its circular composition whose blueprint has become the cover of Hexadic – is a cosmological structure. The kernel, which Chasny thinks fits his work, is a phrase by Nicholas of Cusa: “the universe is a circle whose center is everywhere and whose circumference is no where.” Cusa was inspired by the 14th century Spanish monk, Ramon Llull, who Chasney credits as the great influencer of the Hexadic System. Chasny takes the Borgesian stance that this bit of wisdom functions best as a poetic machine. It softens the rigor of his system, allowing the musicians to play, to interpret. One wants to plumb the depths of what Chasny is and is not saying, but still speaks, in his work. He is fluent in the Psychedelic Speed Freaks, High Rise, as well as the brutalist architect Paul Varillo. Oddly, he is most candid when it comes to Bachelard. Chasny applies the phenomenologist, his “dynamic imagination,” in hopes that one may imagine the cards anew. It’s like having your tarot read, the placement of cards connoting new information. Chasny believes in his diagram’s future meanings, as he explained to Noisey,

I drew that. It’s basically a diagram of a Hexadic figure, which is the way that most of the record was composed. So it’s sort of a code, in a way—if you look at it, that’s the figure that you use and the way in which the cards and the figure interact with each other. It’s actually a blueprint for the system, for the record, that’s just right on the front cover.

There’s still an album here. Culled from all that Hexadic play, Six Organs of Admittance recorded nine songs deemed “rock n’ roll.” That’s the kind of album Chasny wanted to make: “I wanted it to sounds just a little off, a little fucked up.”

He shirks that notion right off with “The Ram.” Hexadic’s introduction, its mathematical sound undermined by the oddly serene, goads comparison to Morton Feldman. The dissonant blast that opens the album heralds the System as a sound familiar at times and not.

“Wax Chance” negates the foray into calculation, planting Six Organs of Admittance back into experimental rock, having earned comparisons aptly to Harry Pussy. The guitar slides nauseatingly. So do the vocals that slip in and out, too. But as the guitar solos, the piece turns mournful and intoxicated. The pace quickens momentarily, as if staggering into a fall. There is the tone of the guitar which matches “High Rise “in its distorted blast that creeps about the frets on “Maximum Hexadic.” Chasney lets the notes ring out, an incendiary decay cradled by the pianist and drummer.

It continues through “Sphere Path Code C” and plummets into “Future Verbs.” The droning quality that Six Organs is known for blends into Earth’s style of drone “metal” on Hex; Or Printing In the Infernal Method. Of course, there is the similar title. One wonders how different the methods could be.

The harsh tone finally blends with the droning vista that had marked a spectrum throughout the album. The finale, “Guild,” draws the listener out into a more familiar waning beauty.

Hexadic is a sample. It can’t be listened to by itself due to the context that overwhelms the album. Does the album matter? Especially, when there will soon be a Hexadic II? It’s a series; a product of a system all bound in a discography and in 2015, a departure. 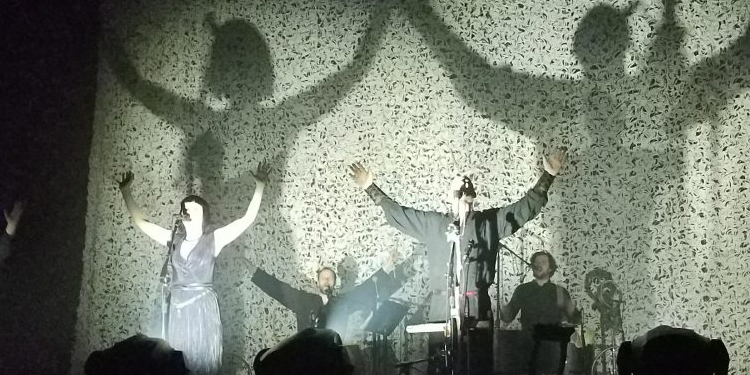 With reserved seating at capacity for The Fillmore in Silver Springs, MD the anticipation for Wardruna to finally grace the east coast with their...