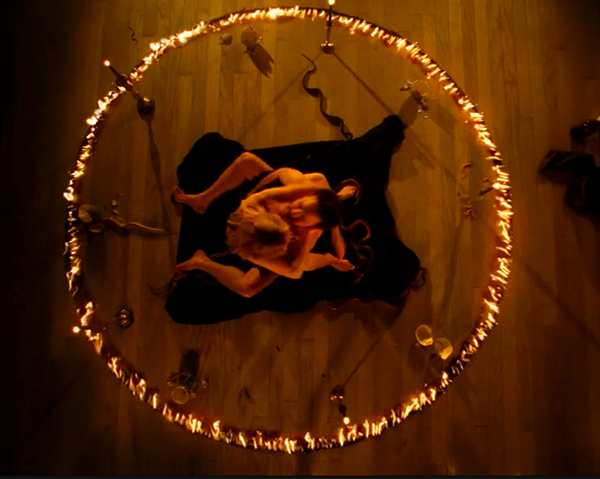 Anointed and purified, she laid on her back at the center of a flattened plateau between four columns waiting for the night’s first devotee. He arrived just as the moonlight touched the heart of the altar, prepared to unite with a goddess. Her mask on, she invoked Her and they came together with intention, offered up blood and semen to the gods as they fervently praised them. This was the rose and the lily of myth, the red and white of the goddess. This was, and is, sex magic.

Practiced for millennia, these rites evolved but never truly changed and are practiced still for countless reasons. It may be a harnessing of energy or a manifestation of wishes for prosperity gained, justice served, protection enacted. Wishing upon an orgasm is infinitely more effective than wishing upon a star and we do it all the time without even realizing it. How many times is the phrase “oh god” pronounced during sex? This is a remnant of wide-spread, though oft forgotten, sex magic. In fact, the history behind the magic is far more familiar than one may think. The idea of the trinity and the symbol of the cross, originally a capital ‘T’, are both pre-Christian emblems of the male triune genitalia. Imagine the masculine cross penetrating the feminine earth, the blood of the chosen one seeping into the soil thus ensuring a bountiful harvest. It happened far more often than once upon a time.

More common still were visits to the temple prostitute, who might offer up only her virginity or her entire lifetime, virgo intacta forever, provided she was penetrated only in ritual. Here she became the goddess embodied, and sex became communion with the divine – transubstantiation indeed. Unfortunately, the notion of embodying a deity during coitus is one that has been much abused. Many a monk, priest, and bishop have convinced countless believers to drop their stockings and invite His Holiness inside; the nun remains virginal if she fucks only Christ’s earthly representative. Did anyone really believe this? Maybe, maybe not, but religious fancy is a miracle cure for a guilty conscience. Aleister Crowley needed no such balm, for he felt no guilt about the sexual rites he regularly performed. One of the most recognizable occult figures in modern history, Crowley was an avid practitioner of sex magic, as his many Scarlet Women will attest. Anton Lavey, the founder of the Church of Satan, also led sexually charged rites, though not as blatantly as Crowley. Still, a nude woman as requisite altar and the sanctioning of a very free sexuality leave the proverbial door wide open for more formalized sex magic.

These are but two well known Western examples. Journeying Eastward, we find centuries of Tantric masters and yogis performing sex magic as an integral part of their lifestyle even today. And why shouldn’t they? Given the poor track record of asceticism and alleged celibacy in our varied faiths, it may be in society’s best interest to reinstate the temple whore; after all, she’s been peeking out of Christianity’s darkened corners for centuries in the form of the Magdalene. Summon her, throw off those puritanical roots as you toss aside your clothes. Don’t be offended, ladies. Enjoy the worship and tell the faithful to leave their offerings on the nightstand.