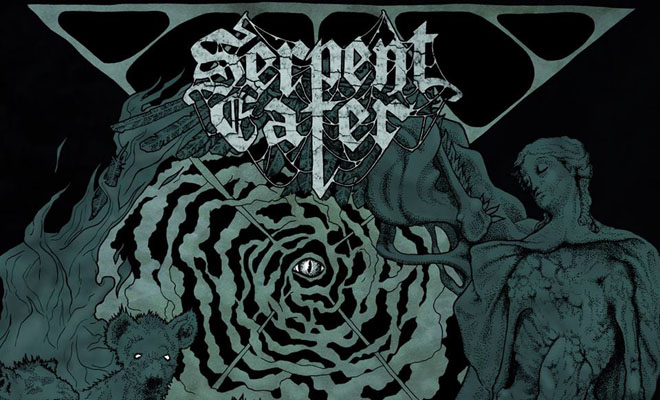 “Ebola” is an immediate conjurer of monumental riffs and thunderous energy, slicing like a blood-thirsty sword through heathen foes. A song whose appetite is hardly whetted, the edge is clean yet nasty. “Ebola” surges, pummeling with ascendant fury. The tempo shifts into a heavy equivalent to a planetary-scale suffocation, sifting that fury through gritted teeth. “Last Cold Word” weaves its vile words through blackened riffs that crack with ice, spinning on the edge of blunted, rusty knife. The song’s frenetic wrath reaches a crescendo at the five minute mark, one of Hyena’s standout moments.


“In the Wall” doesn’t distance itself from the preceding songs, peppering its formulaic death metal approach with a refreshing surge of sorrow towards its climax. The title track is all the usual battle axes and blood lust, until its severed midsection opens up to show a shift in approach, settling into a brief calm before crawling on all fours into mournful worship. “Leitmotif” slaps a dab of punk into Hyena‘s formula, blending it amid the now familiar siege. “Trepanation Nation” is brimming with light-consuming energy, flipping over itself with sadistic glee as its pace rends the listeners ears to shreds before fading out with a final, echoed growl.

Serpent Eater’s Hyena is a solid release; while it does little new, it does much right, offering six tracks of well-crafted, rage-inducing heavy metal. The album can be heard in its entirety here – give it a listen and download.