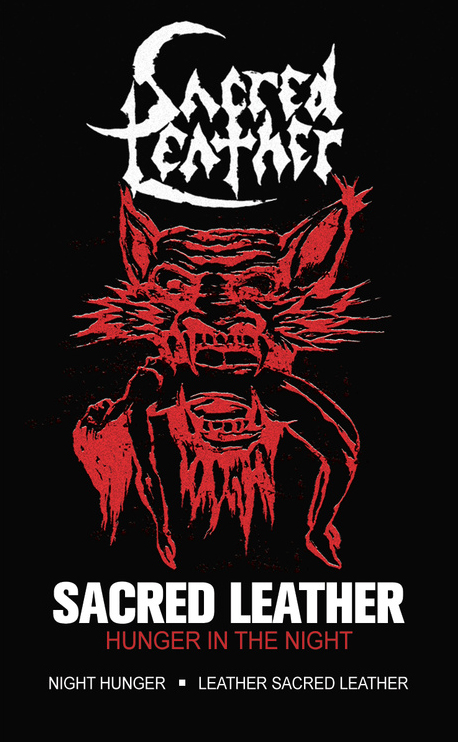 Holy cow! Am I listening to Midnight, one of Hell’s Headbangers’ unholiest bands? This is spirited, blackened heavy metal like few bands can make. The band’s name is Sacred Leather, and their Hunger In The Night two track album is as whiplash-inducing as getting rear-ended over and over by some six year old kid in a Camaro.

The Midnight comparisons are justified. That’s saying a lot, as I love Midnight’s Satanic Royalty as much as Motörhead’s Ace of Spades. The two tracks on Hunger In The Night are absolutely splendid. They’re rocking good fun! They’re headbang-a-go-go. If you mix a little hotrod-loving rock and roll with old-school heavy metal, and add a touch of punk-influenced black and roll, you get Hunger In The Night. But don’t take my word for it. Stream their music at bandcamp, then support the band.

The two songs are catchy, so sing along like it’s Midnight Karaoke. Give the band credit for making this sound like their own. The fact that few people thus far have supported Sacred Leather is an injustice that only trve cvlt warriors can undo in a heartbeat. Tell a label to sign them and offer them the budget for a full-length. We need more of this shit!

If you get bored with this two-track bit of moshpit ecstasy, you’re as jaded as a Winger fan in need of some hormone therapy. Seriously dudes, I don’t want a whole movement’s worth of this music, but Sacred Leather deserves a chance to take its act to new heights. Throw in cover art that should make it on a sorority’s bulletin board, and you get your kicks for cheap. Play this on a cranker outside and start sipping that lager like it’s never going dry, and heavy metal hysteria should worm its way to your road trips and hot summer nights. Invite that heavy metal addict you stayed away from in high school and reminisce of good times (he probably got laid on this music most of the time).

Catchy riffs, shreds, galloping beats and lyrics that could put Bukowski to shame are all here in spades. Mothers, sing-along like you’re bringing your daughters to the slaughters. Heavy metal isn’t back, so treasure this tidbit of unholy heavy metal terror as much as you can. Harley Davidson fanatics tired of acid rock need this movement to spawn a revival. Hunger In The Night, cvlt warriors, earns my approval.