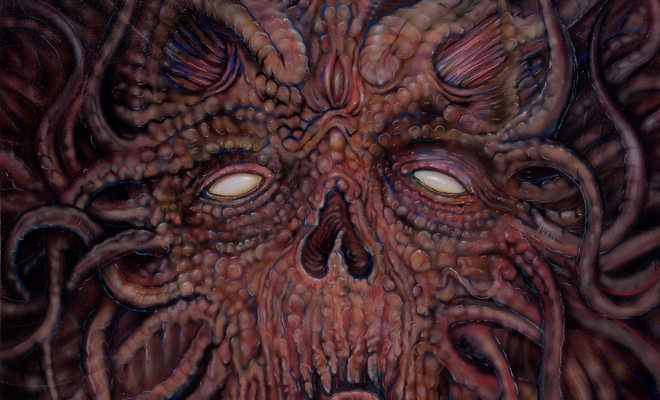 An article turned me on to Winnipeg-based Sabbatory’s debut album, Endless Asphyxiating Gloom, and the album harkens back to a time when metal was about fist-pumping and headbanging and death metal was new. Those were the good times, but an album like this, every now and then, is a good reminder of what the scene used to be like in the underground, when heavy-metal-for-sex-hormones predominated MTV and most commercial music.

Sabbatory’s thrashy death metal sounds a bit like that of pioneering band Master. The tempos never bog down amidst the cavalcade of riffs, and the whole listening experience begs for repeats. That said, the band never does the same song twice, and they make use of good songwriting chops to add variance. The vocals never go high-pitched, and it makes total sense. Put this on to remember the ghost of old-school death metal, before bands decided to put so much fuzz to their guitars they end up sounding like glorified vacuum cleaners (I do like that in some measure too, by the way!) They add some blast sections on most tracks, and the blast sections don’t sound out of place like the blast bits did on the Testament album. The mid-tempo jams make use of some cool punk riffs and the solos are short and sweet. The drumming is so precise, it nails the beats down.

The songs are catchy, and they never get stale. Sabbatory don’t rock one riff from start to finish. The transitions are stellar and the breakdowns never overstay their welcome. In fact, the breakdowns are just as fun as the faster sections are. The vocals are raspy and death metal-ish in the Master vein.

Sabbatory saw its roots in bands like Besieged, but Besieged’s Victims Beyond All Help sounds a bit more explosive in my ears. Sabbatory sounds like the band calmed down after a few beers and jammed this one ’til they got it clean. It’s more polished, and it sounds better for the headphones than some albums did back when the death metal corpse was still fresh.

A good dose of fist-pumping and headbanging sounds like they’re just what the doctor ordered, but Endless Asphyxiating Gloom isn’t a party-thrash album. In a day and age when metal has won more credibility as a viable art form, Sabbatory sound like throwback chasers that take their craft seriously. Support good underground metal by supporting Sabbatory!