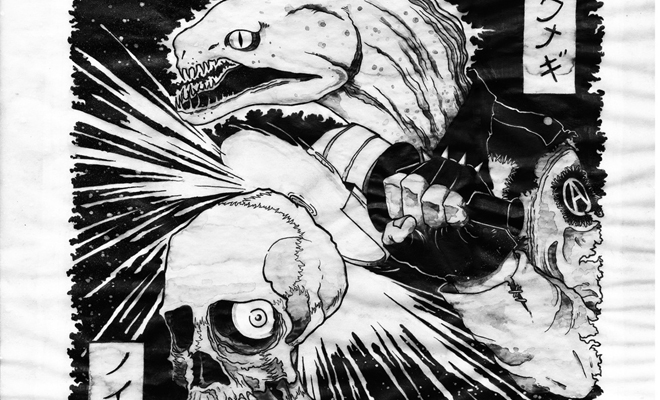 Pittsburgh, PA’s EEL has come a long way since their first show, which consisted of the band playing their recorded bass and drum tracks through the speakers over and over for roughly ten minutes, while they used a Trogotronics Pedal 666 for noise and a power drill on a guitar for what I can only assume was more noise. If that doesn’t seem weird enough, EEL’s first show also featured kung fu films being played in fast forward on a projector and a sheet that the band brought with them, making their first show quite a spectacle. The band is now more than a two piece act, and their 2014 release Endless Fucker is a raw and angry display of hardcore punk with sprinkles of influence that mimic an 80’s UK punk sound, accompanied with chaotic noise, feedback and some power tools. From start to finish, Endless Fucker is an onslaught of raw sound that will force whoever deems their ears worthy enough to listen to it to get up and circle pit with the most dangerous-looking object they can find (at least that’s what I did). The LP blends together perfectly, and with each tune you will feel more and more motivated to burn churches and fuck/fight strangers. If you consider yourself a fan of bands like Conflict, Low Charge, Chaotic Dischord, Lumpy and the Dumpers, Hoax and GAG, then you are probably going to love everything EEL has to offer.

As you can see from the video below, the band has graduated from using a power drill on a guitar to using a fucking angle grinder at their shows, so they can happily spray the audience with sparks throughout the show. As far as I’m concerned, EEL FUCKING RULES!!! and I sincerely hope they make their way to the west coast soon.