I usually use music to fuel the dark, angry, chimp parts of my brain that kick-start my creative juices and crank up the idea-engine. For the past month or so, I’ve been writing a script for a friend, fueled by nothing but newretrowave tunes.  So in sticking with that theme, here are four albums from Bandcamp tagged with newretrowave.

And where to draw the line between newretrowave, synthwave, and any of the other “wave’s” is your fucking guess, because I have no idea.

First off, what a great band name. FaceXHugger. The cover art is fucking amazing, too. This album stuck out immediately to me, because just a few weeks ago, I watched “Aliens” for the first time.

Sue me, alright? I don’t watch movies in a timely fashion.

The first few tracks expertly guide you into a dream-like frame of mind, pulling you into a dark and gritty cyberpunk future, complete with replicants, dreaming androids and c-beams glittering in the dark. The songs are relatively short, but I think this works in the album’s favor. Although songs vary in speed, the album as a whole drags you through the track list in a fast-paced blur of new-yet-familiar synth tones.

Dream With Me. I’m a sucker for strong drums, no matter what genre of music I’m listening to, and this track has plenty of drums to nod along to.

Picture it in your mind. Neon and pastel everywhere. Leg-warmers as far as the eye can see, and Lethal Weapon is in theaters. Do you see it? If not, just listen to 1987 by Sweet Pomelo. This album croons you back into the 80’s with ease and finesse, gently guiding you on a tour through the past, taking the “retro” component of newretrowave to the extreme, for me. When listening to this album, I feel like I’m in a montage, sharing a meal while on an awkward date at a mall food court. The slow pace of the songs adds to the dreamlike quality of the album as a whole.

Small disclaimer: The vocals are all sung in Spanish, so if that isn’t your thing, then you might want to skip this one.

And did I have to double-check that Chile’s official language is Spanish and not Chilean? Maybe.

Querna. This track was the one that really made me feel like I was in a montage. It feels like it was ripped straight out of a movie soundtrack from the 80’s. Crimson Light is simply fun to listen to. The album reminds me of Dance with the Dead’s music and that is a good thing. It is packed with an energy and vigor that the other selections so far haven’t quite had. By far, it is the album with the most modern leanings, but the retro is still there, just not as prominently as the others.

China Rising. This track has an Asian flair to it with strong pulsing drums and what I can only assume is a synth shamisen. It feels like it was a B-side from the Kung Fury soundtrack.

Definitely an album that tends toward the modern side of the spectrum, but it still has enough retro trappings to make it feel familiar. The beats presented in Repent Your Synths are all solid head-nodders, heavy on the drums and synth chords, and what sounds like sampled audio dotted throughout a few of the tracks. I would definitely like to hear more from this artist in the future. It also helps that the album title is pretty fucking clever, too. FutureHell. This song sets the mood for the rest of the album and lets you know what you’re in for, which is a damn good time.

All in all, four solid entries. Each one had it’s strengths and merits, but if I only had to choose one to listen to, it would be 1987. While it didn’t have the strongest drums or quickest pacing, 1987 evoked powerful imagery in my mind. Wave after wave of nostalgia washed over me with each track, culminating in Querna’s dream-like sway. 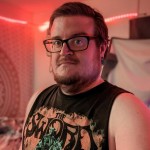