To a young metal head reared on a steady diet of Mercyful Fate and Iron Maiden, Napalm Death seemed to be the only metal band punk rock kids listened to, and were thus deemed inferior. After all, where were the haunted houses and devils on their album covers? After junior year, a girl said to me, “There’s this band you might like called Christian Death…” and my life was changed, and many such oversights have since been rectified. After all, they were the launching off point for the likes of Justin Broadrick  and Bill Steer.

On January 27th, Apex Predator – Easy Meat, the 15th studio album from the grindcore legends Napalm Death, drops with all it’s crazed fury. The band could not sound better. It’s shocking how dense it is. You can hear the influence Napalm Death has had on extreme metal; listening to this album really schools you. In your face, the band is like, “Oh, yeah – you thought Pantera was good, well here’s where they got there hardcore edge from,” or “you thought Oderus was a maniacal vocalist, here’s Barney Greenway.” and “Oh, yes… Today is the Day, you can sign your royalty checks over to us now.” The blasting kings of grindcore have put a lot of thought these songs. There are actual sung melodies at times, not in the overdone, Killswitch Engage good cop/ bad cop trade off fashion, but they come in as needed to vary things a little. Greenway’s vocals are extremely well produced. There is the perfect amount of grit distorting them. Right from the wrath of “Smash a Single Digit,” the album doesn’t relent. In most cases, this would bore me, but these guys learned in the 14 albums they recorded before this one how to perfect what they do. Countless bands try to use their formula, so it makes sense that there is not an element of this album that sounds dated, which might not be the case with the new releases from other bands hailing from the early 80’s “How the Years Condemn” finds bassist Shane Embury really killing, with a more thrashy tone that he pounds into place through the jarring sonic lashing the rest of the band is giving. They kept a similar pacing up until the surprisingly melodic “Dear Slum Lord,” a song that falls somewhere between Swans and Jesus Lizard. They continue to instigate collisions of punk and metal that have recently become more common place with bands like Nails. Napalm Death, being the masters of this, can mold this feral chaos into effective songs, like the lead single from the album, “Cesspits.” They hit just as hard as any younger band and do so with subtle smarts. Drummer Danny Herrera, who handles the drums for Anaal Nathrakh on tour, earns his keep here. He somehow manages to hold all of this together with a concise and relentless fury. His playing is best showcased on the powerful pounding of “Beyond the Pale.” Napalm Death is no exception when it comes to the fact that slowing down to savor the chug is the most effective tool in any band’s arsenal. When they do numb you out with speed, it is done in under three minute doses, and even then the piss and vinegar is given a sweet, moshy chaser similar to what their American counterparts S.O.D, did in the 80’s. Not devoid of dynamics, this album still heeds to the words of Bruce Banner and stays angry. Sometimes this anger allows for solos and sung vocals on songs like “Hierarchies”. At other times, the launch into the blasty mcnasties on “One Eyed,” which almost borders on teaching today’s crop of black metal a thing or two. They rein themselves in slightly on the closing hardcore madness that sounds like Gwar whacked out on PCP. The energy of this album raises the bar for older bands like Slayer, showing that you don’t have to rely on your legacy. This release really raises the bar for extreme metal in 2015, and if you are going to have only one grindcore band on your iPod, why settle for anyone but Napalm Death? 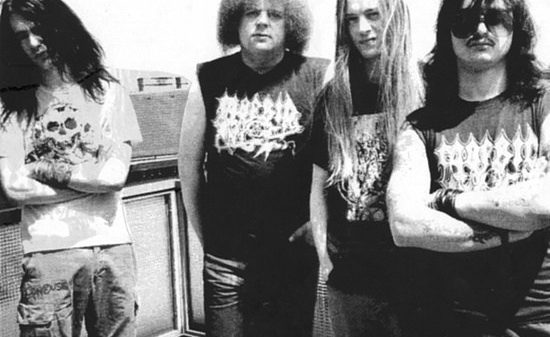