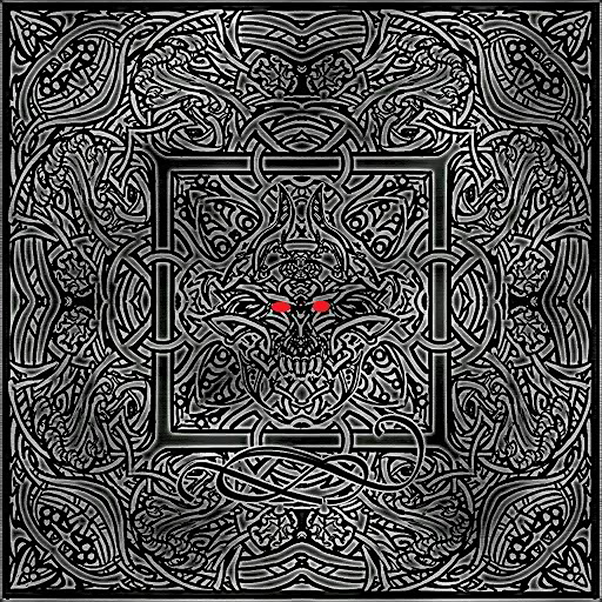 The last of the cluster of Prison Tatt releases up for review, Malkuth’s Tamahprabha, is raw black metal poison for the ears of the uninitiated. Savage and primitive, Tamahprabha starts things off at a blistering pace, transitioning riffs with the use of tempos that vary to keep things fresh. The slower sections sound like ritual black metal titans Malepeste’s signature dirge, and the faster sections alternate between militaristic blasts and semi-fast-paced snare drum bashers. Indeed, the snare drum sees much abuse on this album. In fact, you can’t hear the kick drum because you can’t hear the bass.

Shreds are limited to timely sections in the arrangements, mostly on the upper frets. There are no leads on this two-sided LP, and it is a forty minute monster split between the two sides.

In Jainism, a cosmology based on Jainian sanskrits, Tamahprabha is the sixth ground in seven grounds of hell, the first ground being the shortest and the seventh being the longest span of time a living being spends in hell. Meant as complete darkness, as described in the sanskrit, Tamahprabha is an excellent name for the album, whether or not there is an underlying concept, lyrically. Malkuth howl and cry like souls deserving of damnation. Like I said, the vocals are what I find to be the strongest point of the music. The guitars are barely audible, in the necro style, but are fitting nonetheless. The guitars and drums sometimes blast and tremolo riff like the world were descending into the depths. The vocals certainly add character to the music, sounding like a man vomiting black phlegm as though he had swallowed the tar pits.

The tempos slow down sporadically and the guitars lend a sense of suffocating atmosphere. It is only during the slower sections of some tracks where a listener might hear the almost-absent bass drum.

The very last part sees the band playing ritual-like percussion to the sound of guitar noise. The vocals cease and the music makes a fitting soundtrack to seven billion souls whirling in the dark winds of the Tamahprabha.

Fans of raw black metal should salivate for this LP. If the production were any more necro, the album would be reduced to noisy reverbs and vocal vomits. As it is, the guitars have just the right amount of grit, placed behind the snare drum and vocals in the mix. The arrangements are good, and the songwriting commendable for two long tracks running twenty minutes each without boring me to bits. Think you can stand raw black metal after hearing In Flames do folk shit? Think again.