The Chicago area has brought a number of great bands to the front, from Indian to Lord Mantis and from Locrian to The Atlas Moth. The new addition to this great array of acts is Lake of Violet, a project featuring a few familiar names. It started off with Andre Foisy (guitar, also of Locrian and Kwaidan) and Anthony Michael Couri (drums, ex-Minsk, Cedars of Lebanon), with Jacob Essak (bass, Sun Worship) and Neil Jendon (guitars/vocals/synths of Kwaidan and Catherine) soon joining in to complete the line-up.

There are a number of different influences floating around on Lake of Violet‘s album The Startling Testimony of Plumb Lines – an understandable result, considering the cast that makes up the band and their diverse backgrounds. The first sense that you get from the album, though, as “Backward Light” kicks off, is a ritualistic aura. This is quite similar to the works of the heavier side of post-rock, retaining the cold detachment of the genre of the mid-’90s. Deeply melodic at times, but heavier when outbreaks are necessary, with such manifestations occurring in a setting of complete dissonance, as is the case with the ending of “Circles of Red Dirt” and the huge feedback of “Captive/Fugitive,” alongside some black metal-esque leads and a sludge groove. It all just shows how comfortably Lake of Violet move on the surface.

As a result of this post-rock vibe, the album acquires a distinct mystical sense, something not surprising since two of the four members participate in Kwaidan as well. The meticulous construction of ambiance is unsettling, with the addition of whispery vocal lines and subtle drum hits enriching their vision. The setting changes easily, with Lake of Violet going to more hypnotic moments, provided through repetitive melodies, and traveling beyond the veil of noise to a secluded, mesmerizing state. At the same time, they are able to still masterfully steer the wheel towards a tribal setting, a strange coalition of worlds, where the percussion enhances the mystique of the ambiance and grants a more primal element to the record. To a certain degree, all this flows through the free-form approach that the music of the band initially existed on. Starting off with loose foundations and then polishing them and evolving them into structured tracks has enabled Lake of Violet to retain moments of loose drums, expanding synths and dissonant guitar leads – resulting in a dark, alien jam session. This also allows extreme moments of improvisation, for example in “Circles in Red Dirt,” and the more hazy setting of the opening track.

Yet, Lake of Violet take an extra step and include acoustic passages in their work. It is fairly surprising the first time this occurs with “Dark Blue Square,” as the track feels a bit out of place from the rest of the album, with a strong folk rock tone and extravagant guitar leads. It is still a great track, but feels more like an interlude when it appears. However, the incorporation of this acoustic setting in the start of “Captive/Fugitive” is a vital part of the its vibe, granting a darker tone, while retaining the tribal folk spirit of the band, with some cool slide guitar in there as well, and then appearing in “Please Stay Longer” with a much more towering and imposing setting, and a melancholic twist to overwhelm the listener.

The Startling Testimony of Plumb Lines introduces the vision of the band in the most suitable way. Through its six movements, Lake of Violet present all their different sides, influences and leanings, creating tracks that are intriguing, melodic, dark and ritualistic. It will be interesting to see where they can travel to from here. 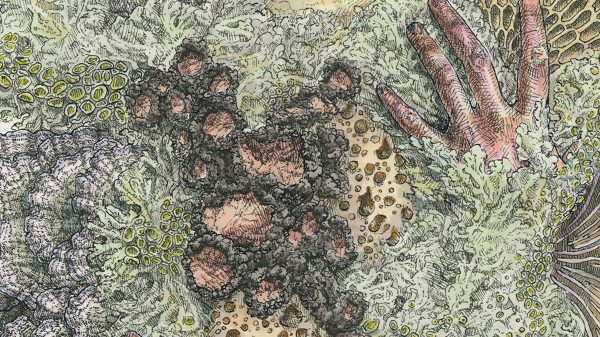