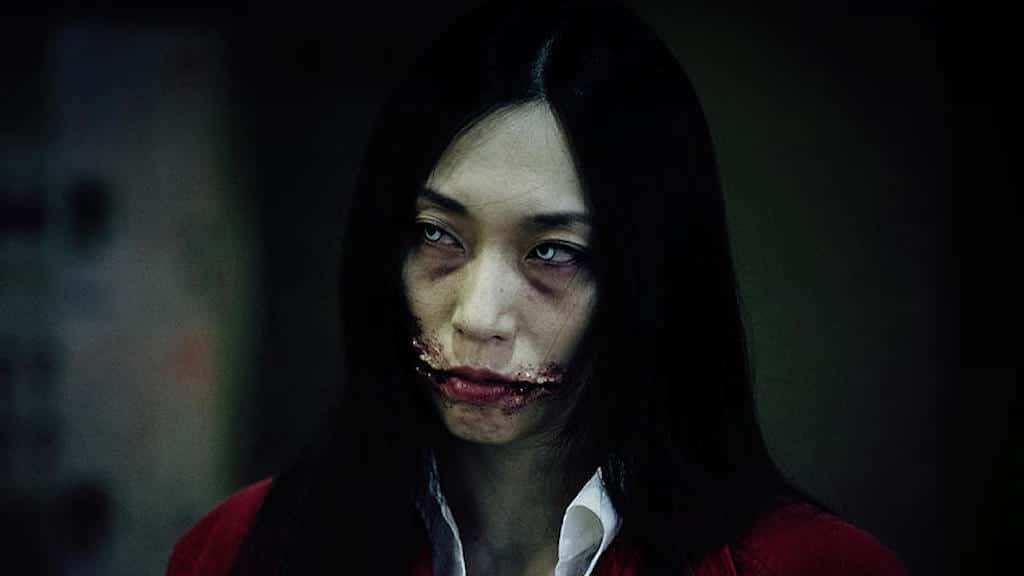 Japanese folklore is full of tales of ghosts, demons and monsters who exist only to exact revenge or terrify the life from the living. Pictured above is Kuchisake-onna, the slit-mouthed woman who goes around concealing her torn face with a surgical mask, and carries a pair of scissors just in case you want a quick lip enhancement. Now that masks are a popular accessory, that one has reached a higher creep factor. Just for fun, here are some of Japan’s greatest, scariest tales of the evil side of the supernatural…

Kiyohime was a young woman scorned by her lover, a monk named Anchin, who grew cold and lost interest in her. Realizing he had left her, Kiyohime followed him to a river and transformed into a serpent while swimming after his boat. Terrified by her monstrous form, Anchin sought refuge in a temple, where monks hid him beneath a bell. Not to be evaded, Kiyohime found him by his scent, coiled around the bell, and banged loudly on it with her tail. She then breathed fire onto the bell, melting it and killing Anchin.

There are many variations of this popular Japanese tale. Yuki-onna is usually described as having white skin, a white kimono, and long black hair. She appears in snowfall and glides without feet over the snow like a ghost. She feeds on human essence, and her killing method of choice is to blow on her victims to freeze them to death and then suck out their souls through their mouths.

Shuten Dōji is described as more than 50 feet tall with a red body, five horns, and 15 eyes. There’s no need to fear this demon, though. In a legend from the medieval period, warriors Raikō and Hōshō infiltrated Shuten Dōji’s lair disguised as yamabushi (mountain priests) to free some kidnapped women. The oni greeted them with a banquet of human flesh and blood, and the disguised warriors offered Shuten Dōji drugged sake. After the demon passed out, the warriors cut off his head, killed the other oni, and freed the prisoners.

Also originating in the medieval period, yamauba are generally considered to be old women who were marginalized by society and forced to live in the mountains—who also have a penchant for eating human flesh. Among many tales, there is one of a yamauba who offers shelter to a young woman about to give birth while secretly planning to eat her baby, and another of a yamauba who goes to village homes to eat children while their mothers are away. But they’re not picky; they’ll eat anyone who passes by. Yamabuas also have mouths under their hair. Delightful!

In another tale of a woman scorned, Uji no hashihime prayed to a deity to turn her into an oni so she could kill her husband, the woman he fell in love with, and all of their relatives. To accomplish this, she bathed in the Uji River for 21 days, divided her hair into five horns, painted her body red with vermilion, and went on a legendary killing spree. Besides her intended victims, anyone who saw her instantly died of fear.

Tengu are impish mountain goblins that play tricks on people, featured in countless folktales and considered purely evil until about the 14th century. They were originally depicted as birdlike, with wings and beaks, though now the beak is often replaced with a comically large nose. They are known to lead people away from Buddhism, tie priests to tall trees and towers, start fires in temples, and kidnap children. Many legends say the tengu were hypocritical priests who must now live the rest of their lives as mountain goblins as punishment. Locals made offerings to the tengu to avoid their mischief, and there are still festivals in Japan dedicated to them today.

A revenge story made popular by the famous kabuki drama Yotsuya kaidan, Oiwa was married to a rōnin (masterless samurai) named Iemon; he wanted to marry a rich local’s daughter who had fallen in love with him, and, in order to end their marriage, Oiwa was sent a poisoned medicine. Though the poison failed to kill her, she became horribly disfigured, causing her hair to fall out and her left eye to droop. Upon learning of her disfigurement and betrayal, she accidentally killed herself on a sword. Her ghostly, deformed face appeared everywhere to haunt Iemon. It even appeared in place of his new bride’s face, which caused Iemon to accidentally behead her. Oiwa’s spirit followed him relentlessly to the point where he welcomed death.

In an urban legend from 1979 that swept through Japan, Kuchisake-onna wears a surgical mask and asks children if they think she is beautiful. If they say yes, she takes off the mask to reveal her mouth slit from ear to ear and asks the question again. The only way to escape is to give a noncommittal answer, such as “you look OK.” Barring that, you can distract her with certain Japanese candies. But if the children say yes again, she will cut their mouths to make them look like her.

In this article:demons, Featured, Ghosts, japan