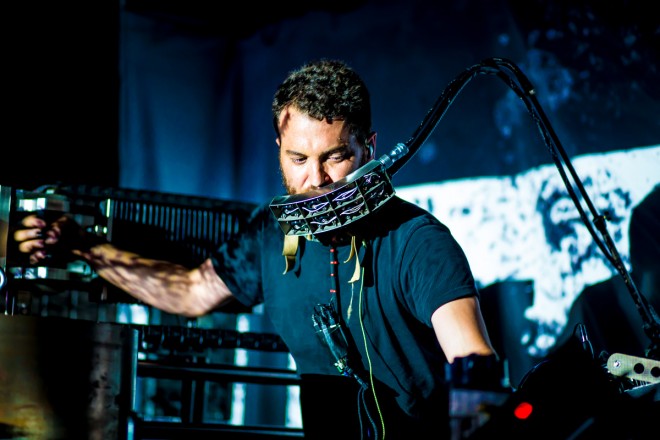 With Author and Punisher‘s most recent album Melk En Honing, the industrial-strength goliath melding machines with their maker, Tristan Shone, continue to broaden the limits of where this project’s sound can go. I caught up with Tristan before he left for a headlining tour (dates below) to talk about the new album and the pros and cons of creating electronic music that dares to beat to a different drum-machine.

So first – when is the tour kicking off ?

Tristan: Next Thursday at the Complex in LA, then it goes up North. I come back for two weeks at home, then three more weeks on the road.

You’ve spent more time on tour for Women & Children, so how did that effect the preparation for Milk and Honey?

Spent a lot of time focusing on upping my game live in a way that allows for improvisation. I’m writing my own script. It’s a huge task and clubs don’t normally like it – they roll their eyes at anything that is not drums and guitar. At times, it seems like there are more layers to things on Milk and Honey; did you build new machines or are you having to change things live?

There may be a couple of songs with synths, and they just won’t have those parts live, but I am trying to write songs with playing them live in mind, because in the past, not being able to do that has frustrated me, so writing it in a way where that wouldn’t be possible is something I wanted to avoid. I love ambient dub, but this album is really driving from start to finish. Phil Anselmo produced the album, and he is one of the best metal singers ever, so he wouldn’t let me get away with anything – we went through every lyric and worked on it.

It was touched on with Women & Children, but there is more actual singing on the new album; was that what the songs just called for, or was this a conscious decision?

I feel like the first two albums pushed lyrically in more a standard metal style, then I got my own mics with effects and got away from that, which was something I wanted to return to. There are themes, lyrically, that needed to come across almost like an urban fantasy. I live in San Diego, which is like paradise, but there are all these people who are frustrated with their lives, government and media. I think, you live in paradise, what are you frustrated about? I’m not overly political, not cynical. I haven’t met many metal heads who are aggressive people unless they are on drugs, because the metal serves as an outlet. But in the world today, there are a crazy amount of drugs and fear of the government. It’s all going to come to a head. It’s a shame, because it’s not as bad as a country like Syria. So there is this energy that we could make work in a positive way, but I’m really just a pacifist. The new album has a cinematic feel, and while death metal tends to relate to horror, industrial has a similar connection to sci-fi – have any sci-fi novels or movies lent inspiration to your work?

Sure, I have an affinity for post-apocalyptic Mad Max stuff. But I am not crazy into sci-fi. I prefer something more psychological, like Lars Von Tier, Bergman. Most guys who do tech and science are not really into sci-fi, we are realists because we see so much, and those movies take so many liberties, even the nerd-out tech movies make it up as they go along. I am not trying to create a mech warrior, I am using engineering to solve a problem.

How has your song writing process evolved over the years?

I spend a lot more time at the helm than in post-production. I use to have a skeletal structure and then go back in and add ambient synths and layer vocals. Now I make sure that I can play it live before I go into the studio.

You work in a field closely related to the process with which you make music; is there something that you get creatively from making music vs the creativity involved in engineering?

Absolutely – the reason I love this so much is I work with neuro science, big electron microscopes, and I get to be creative ten percent of the time, I don’t get to design and be free and take liberties – there are so many rules due to safety reasons or pleasing clients. When making my instruments, I can do whatever the hell I want. The similarity is biological; the place where my machines meet me. The way it acts is unpredictable, where with a lot of other electronic music it is so easy to just slide everything into place on Pro-tools. While you have achieved a balance using technology as a tool, there are many forms of music that use it as a crutch with things like Pro-tools – does art imitate life in this regard?

There is a blog I read every day because it has so much good stuff on it, called Createdigitalmusic.com, run by a musician named Peter Kirn. He reviews electronic music, and there are so many good tools on there. A lot of people depend on those devices – iPads and iPhones – but the best music is still played on instruments, you have to get out of the box. There is an element of anxiety with music nerds to have the newest thing, and they get bummed out and overwhelmed. Just narrow it down to one thing, one drum machine. I think good music comes from good song writing. Spending the time to learn just a couple of drum machines to sync together, or say no, I am just using fruity loops and sticking to that.

On the heels of the post-punk revival, some new industrial bands like Youth Code slipped in behind this wave; are you seeing this scene grow on tour or are you still mainly getting metal heads?

Bands like Youth Code are few and far between – they are kind of dancey but heavy. They can make it work live, there is a reason they are on tour with Skinny Puppy. If I go into a club and see two guys in leather and one has a lap top and the other microphone, I leave fast. They created the fashion first and the the music second, but I would almost rather play with them than the stoner psyche band which is rude to you right when they show up with patches, sunglasses and long hair – the same can be said for them, I really have a beef with fashion and music.

Although Ogre dresses up on stage, it’s the music that has always come first.

Skinny Puppy and Nine Inch Nails, you can’t bring them into the conversation – they go back to the 90s. I would love to get an ear to 20 to 25, even if they are doing something new and different, those are the guys I want to play with.

So in preparation for the tour, what are you doing differently when you hit the road this time?

I have been building up to this since last October. Did the Horror Core festival and playing other festivals, and I’m playing the whole new album except for two songs, then maybe “Terror Bird” – they won’t let me leave without playing that. I don’t play big clubs when I am touring on my own, and the p/a systems can be limited; we need to bass to be visceral so if it’s one sub and a couple of horns and scoops, that’s a problem. Not only am I bringing the cabinets, but we are packing up our sound system and bringing it with us. Fifteen channel sub set, sound guy who handles all of that – which really makes a difference – then I have these masks that are mic’d to get different feedback and effects. I’m pretty pumped, I’m having to do push ups and surf to get myself into shape for it. I also have a guy handling visuals, who projects things onto me and the equipment.

So what new music should we keep our ears open for?

First off, the band we are touring with, Muscle and Marrow – its a female guitarist and a drummer, they have somewhat of a Chelsea Wolfe feel, but doomy and without the blues element; their singer, Kira, is coming over this week to rehearse because she is going on stage with me to sing some of the harmony parts, so it will be nice to not be by myself on stage. Also, Mount Eerie out of Washington, who is very ambient; and Modern Love from Andy Stott, which has more of a Portishead trip hop dub feel.