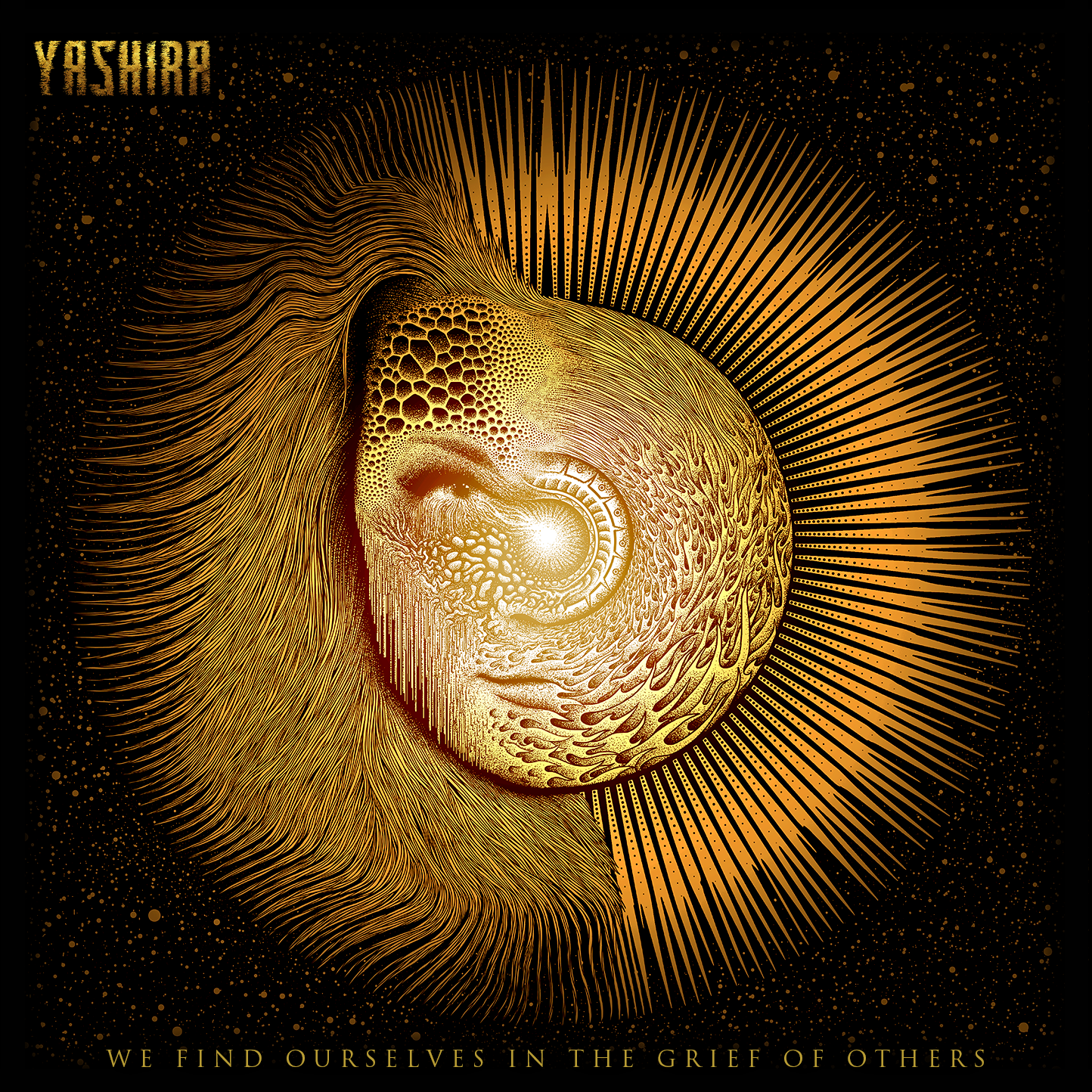 Jacksonville, Florida locals present the sludgy, oppressive, and abrasive force to be reckoned with that is YASHIRA. Massive and sincerely unrelenting is their new two song release, We Find Ourselves In The Grief Of Others. Being stably guided to fruition, their sound is molded by bassist Luke, drummer Seth, guitarist Dylan and guitarist Connor. Vocal duties are thrown in and out of each member, especially live, and it makes for a truly cohesive sound. This release has the same atmosphere as brandishing a handgun in public: dangerous, uneasy, hard, unstable, and – for some super uncertain and kind of illogical reason – cool as hell. This release is seriously just intense an ass-beating, and one of my all-time favorite heavy releases in general, so I hope you enjoy it as much as I do. As an unyielding, throaty call to power, Yashira have quite an interesting path ahead of them, already opening for Full Of Hell on some of their off dates from the Chaos Raids U.S. Tour with 1349 and Tombs, as well as opening for Crowbar and High On Fire. These shows were a perfect opportunity for me to catch a live set of theirs and truly witness a group of individuals that deserve only the best in their musical endeavor’s future. With some sort of what I believe must be a ritual sacrifice, they have unleashed a constantly shifting, changing and challenging beast. Live, the songs are crushing, shattering, and most/best of all, loud as all fuck. Eerily melodic, clean vocals over parts of pure insane deep guitar tones and bass drives, and some of the most interesting percussive progression I have ever had the pleasure of hearing in the genre. Insane gutteral vocals and exquisitely interesting high vocals are thrown into a masterful blend of maelstrom. The drums have superb cymbal work, where there isn’t ever a single moment where there is too much (which I find happens a lot), and the utilization of the whole kit exceeds every expectation I had by just being outright stellar. When all the instruments are juxtaposed there’s a complete disarray of mental stability, and I fucking love it. The increasingly gruff vocals, mainly done by Connor and Dylan, are somehow belted out and destroy mics while they shred strings off guitars.

“Dialysis (Cynosure)” is the first song, and is just over five and a half minutes of progressive disaster in some of the finest packaging. Descriptive lyrics and phenomenal vocals that blend with the mix truly make Connor and Dylan dual instrument-wielding weapons. Before the flight, a short discharge of feedback steadily rings before vaulting into the open abyss of Yashira’s descending sound, that does more than just feebly hold its own. It frenetically bounces between blastbeating, fast guitar, and swelling basslines to slow, methodical drumming, towering guitar sounds, palm mutes, and slaying bass drippings into the fat of what makes this release so damn special. They don’t ever take a step back or relent from their audio bludgeoning; they milk these notes and sweet, sweet licks until the very last drop of feedback is squeezed from their amps.
“Alluvion (Succumb to Cycles)” is the closer, and just over nine and a half minutes long. It is a more slow-burning song, reverberating guitar dragging itself along over lines of finely-dusted feedback and whirling sound decay, bass gradually joining in as the drums start to fight an opening in as well. The feedback, static, and echoing loops out into an increasingly violent slew of orchestrated decimation. It is as slow as the speed of agony departing your rotting life, just before seizing up and bursting out of you into a gallant string of upbeat evil and shouted cleans that break the drums into a singularly creative take on a sludgy blast beat. The song twirls and dissolves into a d-beat punk pattern with distinct and individualistic vocals layered caringly over each other as a love blow into more sped-up madness. Before letting themselves fly all the way off the handle, however, they are able to reign themselves in from an edge that is absolutely certain to destroy venues in cities across the world. Palm-muting fight riffs and bass solos for nothing but untouched savagery and cold-blooded murder close up this monster’s cage as he is dragged back in. The deafening, eradicating, fist-swinging parts of songs seem to be extended live; insanely and bravely inventing a personal warzone of their own.

Even though the beast of this band is caged temporarily, Yashira played a third song live that is longer than both of the ones on this release, and even more dauntingly vicious, so I highly suggest you stay in touch with these bad boys to hear it.
They partnered with local label Southern Druid to release a 10″ picture disc vinyl of the EP and I highly suggest grabbing a copy here! In this article:1349, Chaos Raids, crowbar, death, doom, florida, Full Of Hell, high on fire, Insane, Jacksonville, music, Noise, Power, psych, review, sludge, TOMBS, We Find Ourselves In The Grief Of Others, Yashira