Pure necromantic darkness. This succinctly sums up the new offering from Ill Omen, and it’s something you can sense and feel from the get-go. The successor to 2014’s marvelous Enthroning The Bonds of Abhorrence, Æ.Thy.Rift carries the torch forward and even deeper into the mausoleum, as Ill Omen have wrought their most atmospheric, doomy-sounding record to date. It’s something you might even foresee upon noticing that it features just four tracks, and it would be fair to say that you get a heaping dose of what this album is all about on the nearly fourteen minute long opener. If the last album wasn’t ritualistic enough for you, you’ll love Æ.Thy.Rift.

Like a thick, black fog inching its way across the Pacific, this record comes at you at a crawl, and like a noxious, invisible gas, it fills the room, infiltrates your pores, and lays you to rest before you ever knew what happened. It’s eight and a half minutes into this album before Ill Omen begin playing anything that might be called “fast,” as the first composition features awe-inspiring, death-illuminating atmosphere that simply suffocates you with its thick, droning riffs and resultant feedback amidst sepulchral keys and whispered divinations. By the time you’re hit with a little guitar “lead” of sorts in the song’s final two minutes, you’re completely under the spell of this one man project, utterly hypnotized.

Let me just say it now: this album is a total soul-crusher, a venerable ode to the dark forces that pervade, and a haunting requiem that you will not be able to rid yourself of at night when you close your eyes and try to forget your existence. Indeed, Æ.Thy.Rift is as infectious and memorable a ritual as you’ll hear all year. Long, winding, dreary riffs like the ones that dominate the second song of this manifesto, for instance, are enchanting in their mystique as they subtly spin their web around you, fully encompassing your being with powerful resonance. Practitioners of the dark arts especially will be drawn to Æ.Thy.Rift like flies to the dead, but anyone with the slightest bit of morbid fascination in their Being is sure to find this album to be an absorbing work, an album that stays with you and lurks within with an intimacy that no one could ever expect or shield themselves from. Something about these riffs, their tone, and the overall mood of this album altogether is so genuine sounding that it’s not something one could easily forget, like it or not. The steady lurching of track three, for example, with its scintillating, spine-chilling progressions, is entirely foreboding in nature before it finally takes off at the 6:21 mark with a driving riff that pushes the formula step further. All the while, bellows, whispers and howls resound in the background, surrounding the instrumentation like another layer of time absolving fog. It’s that black fog I referenced at the beginning of this review that you’re left with when track three slithers away and you’re left with the closing outro track. For three and a half minutes, the circle is completed, as Ill Omen demonstrate their intent to finalize their ritual with awing atmospherics that bring Æ.Thy.Rift to a haunting close. But when the droning of the instruments, the echoing vocals, and chilling keys all come to a sudden halt and the album is over, you’re still lost in that fog; your subconscious all but buried in it, your waking mind obsessed with it, fixated on it, and ultimately, forever changed by it. A true ode to eternal darkness, Æ.Thy.Rift might just be Ill Omen’s deadliest spell yet.

Advertisement. Scroll to continue reading.
In this article:Æ.Thy.Rift, Ill Omen 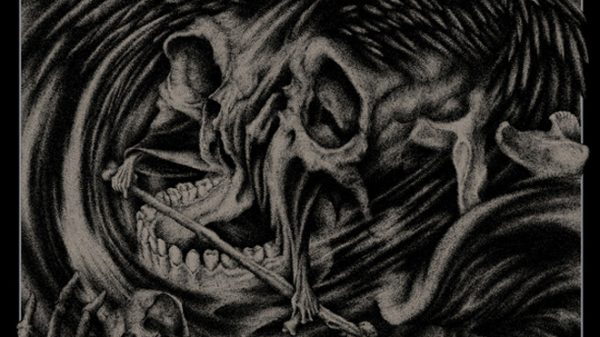 Death and darkness: it’s safe to say these two things have, at the very least, a symbiotic relationship – one that is heavily tethered...