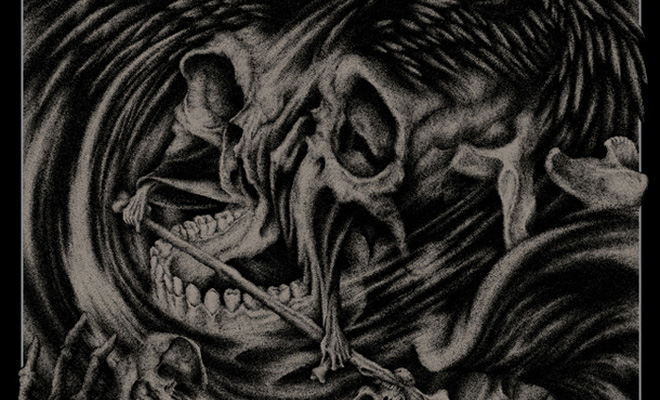 Death and darkness: it’s safe to say these two things have, at the very least, a symbiotic relationship – one that is heavily tethered to the essence of what makes up Black Metal music. To this, you might already be saying, “well, no shit, Sherlock!,” but I begin in this manner because the sophomore effort from Australia’s Ill Omen struck a significant chord with me, as Enthroning The Bonds of Abhorrence takes this conceptual platform and the traditional approach (musically speaking) that goes along with it to its highest peak of black art brilliance.

For every track that comprises the makeup of this hour long affair is seething with a certain malignant grandeur and decrepitude that’s hard to describe, hard to put ones finger on. It’s something that simply must be heard, felt, and experienced to truly understand, as all the conventions of traditional Black Metal are on display here. Indeed, there’s nothing entirely original about the use of tremolo-picked guitars, raspy vocals, and synth in the genre – thus, this record will seem reminiscent of everything that epitomizes classic Black metal, and in truth, it is…yet, there’s just more to it than that.

Every man tells his own story, and the individual behind Ill Omen is telling a tale all too familiar, as each of the described elements are peppered throughout Enthroning… with the exactitude of a cookbook recipe, but like with any formula, everyone adds their own touch. Another way of describing it might be to say that while this record doesn’t reinvent the wheel, it may, perhaps, change your perspective of it. The best examples of this occur on the first two tracks, “Abhorrence VI,” IX,” and “X”. As impressive as this record is as a whole, these tracks in particular raised the hairs on my neck with their unforgiving compositions and penchant for harrowing, spine chilling atmosphere.

The opener begins with noise before slowly ascending with ritualistic grandeur before the ground gives way to whispered death hymns and a malicious, buzzing riff that ignites Ill Omen’s Black Metal attack with ferocity and strength. The rest transpires with its peaks and valleys, ebbs and flows, and ultimately kicks off the album with the kind of dynamism a band would want to showcase. No room is left to breathe, however, when the second track begins. You know the second you hear that riffing and when the vocals and drums kick in, that at this point you’re cloaked in pure darkness. There is no turning back; there is only complete and total immersion.

“Abhorrence VI,” however, is without question the album highlight. The kind of song that really only needs a single riff because so much power and meaning is carried with that lone riff that the six minutes and twenty four seconds it spans goes by in a flash. It is Black Metal perfection and that’s all there is to it really. The composer certainly knows this as well, as his vocals resound and echo with ultimate ferocity. This song is simply majestic.

“Abhorrence IX,” on the other hand, has a buildup reminiscent of the opener with its howls and slow beginning, invoking and evoking a darkness shrouded with fog hovering over mass graves before giving way to a staunch attack that maligns all comfort and continually uplifts Ill Omens doctrine of death. It exemplifies the kind of chilling supremacy that Black Metal is still capable of and you’re a fool if it doesn’t get you head banging with dark delight.

The following song, “Abhorrence X,” is the albums musical closer (the outro is noise) and hits an atmospheric tone on all cylinders with an unforgiving death knell of an opening riff that slithers beneath particularly hoarse, whispered, yet monstrous vocals that hover above. Together, they create a feeling of immense unease and anxiety that is only climaxes when things speed up with tremolo riffing that elevates the song with its subtle movements, closing the album in grandiose fashion.

I remember staring at the album cover for some time after, completely absorbed in thought, and unconscious reflection. The amalgamation of death symbolism penned by artist Alexander Brown and its swirling, ambiguous imagery aptly reflects the subconsciously penetrating morbidity of Ill Omen’s death hymns. Indistinguishable in the darkness, but nevertheless omnipresent, the horrors of finality, of death, pervade this work, and will permeate the very fabric of your Being. Enthroning… is a refreshing take on text book Black Metal that lightweights and weaklings should avoid like the plague. For purists and true death worshipers only! Don’t let this one fly under your radar.

In this article:Enthroning The Bonds of Abhorrence, Ill Omen, slider

Pure necromantic darkness. This succinctly sums up the new offering from Ill Omen, and it’s something you can sense and feel from the get-go....