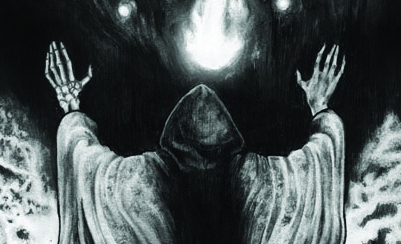 Italian duo Hadit will give you a blackened death metal habit. Courtesy of Caligari Records, the band has just issued their second release entitled Introspective Contemplation of the Microcosmus. Right now, the record is only available for sale in cassette tape form, but all four tracks that comprise their sophomore effort are available through stream at Caligari Records bandcamp site.

Hadit like these long titles for their songs for extra cvlt assuredness. There’s no shoegaze, no acoustic elements present on Introspective… – the band is locked in on tremolo riff when blasting, then slows down for some heavy downpicking and shredding to vary the pace. The drums are ultra-fast on blasts, and it’s all somehow captured live like Hadit were demolishing the recording studio during takes. Except for the last track, the runtimes of songs are actually somewhat short. Overall, what you get on this tape is pure blackened death metal goodness for just over twenty four minutes.

The band use very melodic shredded leads to go with double-kick drums a whole lot on this here release. They somehow play doom groove on the mid-tempo to slow sections, and as such prove to be quite effective. There’s almost no lead guitar, so don’t worry if you’re not into rock-god posturing. It just doesn’t happen here. Breakdown, mid-tempo, blastbeat – these guys know that blackened death metal ain’t about playing leads like those of Michael Amott. There must be some conceptual ideology to this effort, I am thusly possessed of the belief. This tape comes with a killer cover. The band has a nice logo as well. The song titles hint at some greater meaning behind the music. “Occult Whispers Declare the Impending Apocalypse,” “Interlude Meditation After the Desolation.” The song titles draw occult lovers to Hadit’s craft. Overall, if you’re into blackened death metal, you can’t go wrong on Introspective…; any which way the band cranks out the jams, they’re solid as granite, so tape lovers should get their copies while supplies last. Otherwise, casual listeners might still love a thing or two about Hadit’s latest, unless you guys haven’t heard any blackened death metal at all – and in this case, your virgin ears just got bitch-raped, fuckers. Fear not; if you think this reeks, you have unquestionably bad taste in underground metal. Stay firmly grounded in mainstream major label shit.

If you love this, support the band and send your friends a shoutout. We haven’t heard the last from Hadit, and I for one will be looking forward to their next release. So Hadit, well done!